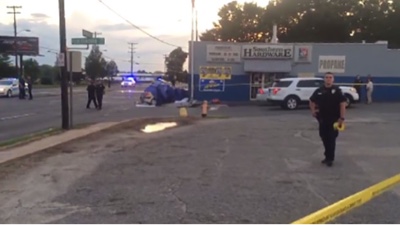 Just a block away Charlotte Mecklenburg Police Officers were sorting through a crime scene that left two young women dead and a young man charged with crimes that if convicted could send him to prison for the next 20 years.

The stark contrast wasn't missed by the many guests who had to detour around the maze of blue lights, CMPD cruisers, Medic and Charlotte Fire vehicles that had responded to the crash of the stolen car on Wilkinson Boulevard shortly before the event began. 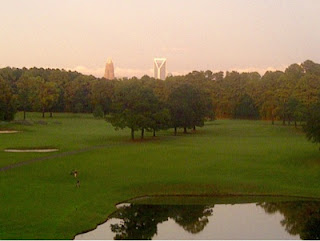 The night's event was held at the Carolina Golf Club. Founded nearly 100 years ago at a time when the area was considered out in the country, the hilly farmland on the outskirts of Charlotte made the perfect location for a new golf course. Today the view of the Bank of America tower from the perfectly maintained club house lawn offers no hint of the struggling West Charlotte community that surrounds the 18 hole Donald Ross designed course.

It is the same community and the same youth of Charlotte that The Behailu Academy seeks to serve and help chart a course in life that provides avoidance of the scene that unfolded around the corner from the club house. The gathering of gentlemen in jackets, ladies in heels and short skirts each wearing party rings, with red, blue and yellow flashing lights that oddly echoed the accident scene on the Wilkinson Blvd, was a great success raising money for the innovated arts academy.
The aftermath of the crash was still visible as a light rain began to fall around 9:30 and the patrons of The Behailu Academy event headed home. The rain slick streets reflecting the lights of a lone wrecker removing the crumpled car from the street.

Late Sunday CMPD released the names of the victims, as 22-year-old Sarah Love who died at the scene and Jennifer Taggart, 17 who died Sunday night of her injuries.


The driver Kenneth Goggins remains in the Mecklenburg County Jail. Goggins has numerous prior convections on drugs and weapons charges including armed robbery.
According to CMPD, detectives received a license plate reader hit on a stolen 2008 gold Kia Rio at about 6:30 p.m. on Central Avenue. CMPD was able to use traffic cameras to monitor the Rio’s movements and the Aviation Unit helicopter was deployed.

A CMPD Officer attempted to stop the car but the driver elected to the flee. The Officer broke off the pursuit several blocks before the accident due to traffic in the area and the fact that CMPD's Snoopy II helo was over head.

Behailu Academy is an arts based initiative helping kids in middle and high school break out of the cycle of poverty, crime, drugs and bad choices.

Anon 5:02 is obviously trying to stir a reaction cause he/she knows there's mostly cops on here... So that said,
You know damn good and well when the police "leave people alone" you'll have more of what we did on Labor Day. So you and your ignorant black lives matter retards just keep on with your s***, see what happens when police grant your wish...

Poverty and lack of opportunity are associated with higher crime rates; crime leads to arrest, a criminal record, and usually a jail or prison sentence; past crimes lengthen those sentences; offenders released from prison or jail confront family and neighborhood dysfunction, increased rates of unemployment, and other crime-producing disadvantages; this makes them likelier to commit new crimes, and the cycle repeats itself. It's about jobs.

This is not the first time an LPR hit has led to a pursuit ending in serious injuries (or in this case death) of passengers.

Ever think of using the LPRs/cameras/RTCC to track someone after that initial read so that you can (possibly) avoid having to initiate a traffic stop? (Yes, I know the interstates pose a problem to this)

Wait for them to get gas, stop at their friend's house, get stuck in a lane where they can't run, etc. If all else fails, tail them as long as the cameras/LPRs will track and you'll hopefully be in a less densely populated (or lower traffic) area to initiate your stop.

I don't really care about the suspect's safety if he decides to run, but this approach would be safer for his passengers, other citizens, and the officer. I know the officer broke contact in this case, but we all know what kind of risks there are when anyone stomps on the gas pedal to get away.

8:16 just opened a whole new can of worms. How to solve that problem is the six million dollar question!

9:57 the LPR's and cameras used by RTCC are primarily positioned at intersections and therefore makes tracking an individual pretty much impossible once they turn off of major roads

5:28. I'm quite familiar with that current tech and practices on this. So yes, it is impossible--as a standalone LPR/Camera system as it is used today based on the reasons you mention. There is so much more that system can be legally used for if interfaced with other technologies and practices. I like pie too.

Are we talking about pootang pie or The Rock's strudel?

Shit bag felon steals a car, has 2 "innocent" passengers with him, shit bag flees from police, shit bag is drunk and crashes car, passengers die, shit bag survives, DA will most likely not dish out appropriate justice (SOP for the Meck DA), moral of the story, don't steal a car then flee from police when they try to stop you.

And in other CMPD news: The morale of officers is once again at a low point due to The Transition Team and the Chief screwing patrol with changing their schedules around. With the holidays approaching and many vacations and family events planned, the The T Team and Chief decided it would be a great time mess with the personal lives with it's officers. Another example of our 24/7 organization being poorly run by white shirts that work Mon-Fri 9-5 ( sometimes less). The big blue wiener of CMPD is firmly planted in the asses of patrol. Cedar has any of your sources contacted you about this?