In a word, Fayetteville Police Chief Harold Medlock is angry. He says the KKK left a racist flyer on his front lawn and he told ABC11 he believes he was the target. 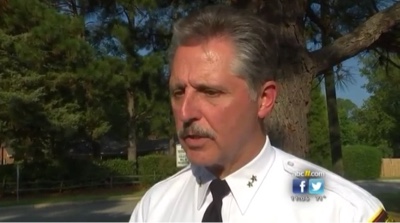 Now, he has a message for the white supremacist group.

The chief wasn't the only one to get the plastic bag with a Confederate flag, a piece of candy, and a recruiting flyer. The flyers were put out in the Vanstory neighborhood to apparently a select group of residents. Not everyone got a flyer......
The rest of the news piece is here. Cedar's Take: http://abc11.com/news/kkk-targets-fayetteville-police-chief/969488/
CP Side Bar: While Fayettville's Chief wears the traditional 2 stars of a North Carolina Police Chiet on his collar he has borrowed a slight of hand move from Rodney Monroe and "upgraded" his badge to 4 stars. 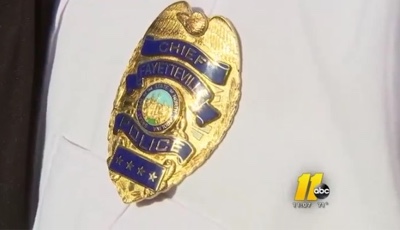 Cedar's Take: Medlock is such a hubris dictator that of course he would think he was targeted. But his selfcentric focus only gave the KKK nut bags what they wanted, free publicity. In Cedar's opinion the citizens of Fayetteville deserve better in the department ledarship, rank and file never deserved a moron and city leadership should pay their attention bill.
Hat tip to Jeff Taylor @TheFree_Lance
Posted by Cedar Posts at 1:00 AM

FPD Chief Medlock is angry!?! What's new? He's always been an angry man.... Even when he's happy he's angry! Just glad he's gone from here. Several more to go before we can get this place back to normal.....

Harold Medlock is an angry, unhappy person....always has been.
His SOP is red faced, lunatic screaming and yelling.
I do feel sorry for Fayetteville.....Harold only thinks of one person, and that would be Harold.
He has virtually NO leadership skills.
He is another one that will throw people under the bus to protect himself and get what he wants.
Simply, he is a looser.....

Medlock wrote the book on intimidation, good that he is getting a taste of what it feels like!
He's a total non entity.....contributes nothing.

if you leave a confederate flag, candy, and KKK application on someone's lawn, have you broken the law?

All bad blood you guys may have for Medlock aside, isn't it silly that a chief would receive something like this and provide information to the media about the subdivision he lives in?

6:42 brings up a good point--no laws were likely broken. But Medlock bows up, sticks his chest out and has some choice words so that the community knows he isn't down with the KKK.

Was it worth it?

@Cedar i guess this is the CMPD standard or the Ferrell Effect?

He feels threatened, so he is willing to sit down and discuss it. Ha. Strong... If someone is threatening you it is time to stop talking. Publicity stunt. Nothing more.