High School has changed a lot since Cedar's days at Charlotte's South Meck High School. Admittedly I lived in a safe violence, free bubble where the term SRO was as foreign to me as gang banger, hood rat, thug and Facebook.
In 2015 armed police officers patrol the hallways of every junior and senior high school in Mecklenburg county and telling a teacher or school adminstrator in a public school to kiss off has become common place. The continual discourse of disrespect directed at teachers and police offices is mind numbing.
So a video showing a school resource officer removing a student from a classroom comes as no surprise. Anyone who has sat in one of the lightweight chairdesk classroom standard chairs knows it doesn't take much to turn one over. 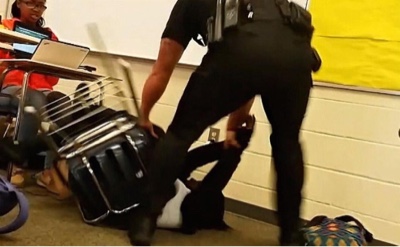 Nor is there a big surprise that this happened, resist arrest and this is the prize you win.
Tony Robinson Jr, the student who recorded the incident, said that the girl was being asked to leave the classroom for taking out her phone. She was asked by the teacher and by an administrator to leave the classroom, but she refused. Officer Fields was then called into the room, where he asked the students surrounding the girl to move their desks, then he closed the girl’s computer and moved it to another desk. Robinson said that while the girl refused to leave the classroom, she was “apologetic.”
<iframe width="420" height="315" src="https://www.youtube.com/embed/Tq4BR5KHuqA" frameborder="0" allowfullscreen></iframe>
Oddly , libtard and race card flashing Don Lemon spoke out against a rush to judgment:
In a clip that was tweeted – then deleted – by Don Lemon CNN Tonight, Lemon said, “It does look disturbing — the part that is most disturbing to me is seeing her thrown around. As far as the desk going over, I don’t know if the desk fell over because she didn’t want to get up, or if he pushed over, I don’t know, so I think there’s context to everything, I would like to see what happens before and I would like to see what happened afterwards… [But] it does look horrible, it does look like there’s no excuse for what he’s doing for her, [but] we don’t know… It only shows a small slice in time of what happened.”
Obama apparent successor Hillary Clinton was quick to offer condemnation, as were the other usual suspects. 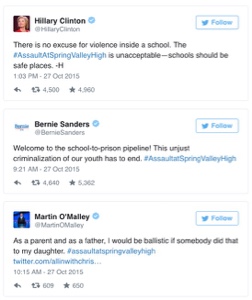 But beyon the media hype, we should notice that this incident points to a bigger issue. the give me free stuff crowd also thinks school is a joke, and "fuck the police, teachers, and school adminstrators."
Cedar Update Officer Fields has been cited for termination.
Posted by Cedar Posts at 2:42 AM

Hope Fields is charged and put under the jail.

What would a reasonable police officer in the same situation have done?

Wasn't that long ago the teachers could hit the children and the worst problem in the classroom was chewing gum or talking... I think the officer showed restraint. Had I been that girls father, I'd have given her a lot worse when she got home.

She's a burger flipper wanna be.

Negros will be the death of our country. They have zero motivation beyond smoking weed and popping out babies.

I cant believe police officers aren't quitting en masse or at least going on strike. Its just not safe physically, mentally, financially and there is a good chance you could get caught in a situation like this and your life will be ruined by twisted facts and people with bad intentions and agendas. This case has just reinforced the thinking that kids need not respect authority and specifically police officers. So its only going to get worse.

Hopefully Hillary Clinton wont get elected because her support of lack of respect for authority is just scary. Even if she is only saying these things to get votes right now.

also, If the "child" wasn't fighting the officer, she couldn't have flipped backward. all she had to do was push with her feet or arms and the desk would flip backward. She created the dramatic effect. And the very school that called that officer in for help has now turned against him. This is sickening.

Sgt. Hank Voight, of NBC's "Chicago PD", recently said something along the lines of - the police officers who do nothing are the one's who are never in trouble. While that's not a direct quote, the context of his message rang true to many of today's headlines involving officers being blatantly disregarded, disrespected, and the like.

Yup. It's always the pro active ones. So, solution... Do your zone checks, and put your blinders on. Explain those stats to city council Chief...

As for Poot-nay and crime stats, he's already having to explain the current increase in crime. Guess he is reaping what has been sown by him and many other "brass" (past and present).

I couldn't have said it better myself. We should have certain individuals in white sheets in the past keep them in check. Then we wouldn't have as many problems out of them today.