The news from Paris last night was heart breaking. Paris was under attack again, and because of the six hour time difference it fell into America's prime time.
But unlike the attacks on the U.S. embassy in Benghazi which occurred during the wee hours of the morning eastern time, the prime time attacks turned my Twitter feed into a never ending stream hoaxes and misguided tributes.
Surprisingly Fox News was a major part of the fraud, tweeting that the famed Eiffel Tower had been turned off to honor those lives lost in the attack. 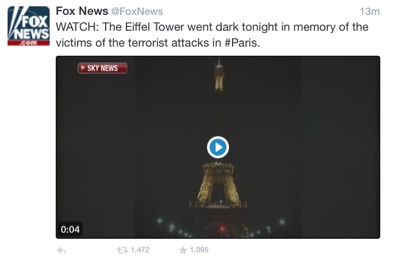 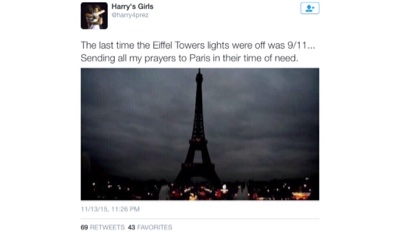 The truth is the Eiffel Tower goes dark every night at 1 a.m. and the Sky News vine (loop) that Fox News posted was from a ceremonial darkening of the tower days after the Charlie Habo attack in January.
But the stupid didnt stop there, countless tweetings of "Not Afraid" photos claiming "Paris Right Now" along with words like remarkable, amazing, heart broken, solidarity and we stand with Paris filled my Twitter feed.

The Dutch flag was mistakenly raised in support of France by dozens. 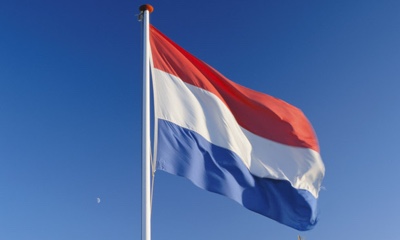 The Tri color flag of France is vertical bars of Blue, White and Red, by the way it is not red white and blue.
Most troubling the #Mizzou crowd took to Twitter to complain that #Parisattacks stole their spotlight, that they were under attack too! 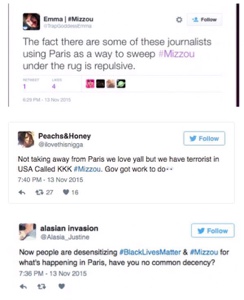 During Benghazi the tweeter feed was nearly real time, very graphic and troubling. But there wasn't the stupidity of the Paris Attacks. I am left to assume that was due to the fact that the Americans were asleep and those in Libya that have the luxury of cell phones take their news reporting and sharing seriously.
We on the other hand are clearly a nation of clowns and trolls.
Posted by Cedar Posts at 5:33 AM

#mizzou are a bunch of clowns...
Selfish little babies.

So much for the JV squad huh Barrack?

Barry Obama is a friggen Muslim and he's back dooring us all. He was put in power by the Muslim brotherhood and purposely bringing the USA down.

My favorite is how everyone with a facebook now puts the French flag over there profile picture. Wow....you sure are showing how supportive you are by doing the bare minimum possible to impress your friends....wow...