CP is hearing conflicting reports about what happened during a murder warrant execution and arrest Sunday night. 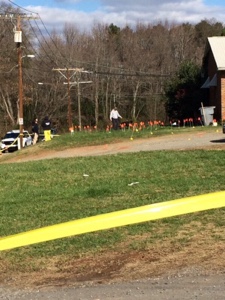 CMPD is keeping the facts under wraps but the suspect is dead and a female officer wounded. The other 7 VCAT Officers are reported as uninjured.

The team has a near perfect record apprehending 100s of violent felons without ever firing a shot. The tactical unit relies on surprise and swift action to take into custody suspects who are assumed to be armed and dangerous.

The highly trained officers are so good that federal agents request their help throughout both Carolinas.

But something went wrong Sunday night.

Rumors are wild and wide ranging. From a tip off to accident discharge of a weapon. Allowing the suspects a chance to fire on the officers before they entered the house.

According to a CMPD statement "they (CMPD VCAT Officers) were confronted by several suspects who began firing at the officers." Later CMPD revised that statement to: just two men exited the home, one (the deceased) started firing and the other ran to a nearby house.

Orange flags mark spent brass in the side yard of the home in West Charlotte where Monetary Wallace fired on CMPD Officers.

Every once and a while these CMPD posts are just a little close to home. So I'll normally sit on a story until the smoke clears. In this case the story just keeps rolling along.

First the VCAT guys do a tough job. This isn't the first time someone has been shot serving a warrant. Yes they are a very well trained precision rapid action unit. But sometimes things go to shit pretty damn quick.

Some how the element of surprise was blown, sounds like just random bad luck. They will or already have reviewed what went wrong and who's at fault.

But know this there are bad people out there, some who just want to kill cops.

Thankfully everyone went home that night.

About body cams. WSOC is all over this part of the story. I'm not sure what the right answer is. I tempted to say body cams are good for patrol and cumbersome for tactical units.

Maybe that's not the right answer. Any suggestions?
Posted by Cedar Posts at 11:45 AM

Cedar are you hearing that the female officer accidentally discharged her weapon shooting herself and alerting the perps? Just water cooler talk I guess. How say you?

I'm hearing the same. Shot herself in the foot and bad guys opened fire afterward. I seriously hope it is just rumor...

What seems to have happened is, just prior to entry someone discharged a weapon, alerting those including the suspect that a person or persons were outside. Suspecting a drive by retaliation those inside fired back not knowing that they were shooting at cops. Of course the return fire left no doubt they were out gunned and those inside the house surrendered.

If so, she had her finger on the trigger and not along the slide. Startle reflex.

Back in the Corps we practiced trigger discipline!!!

I have heard the same about the female officer having a trigger discipline issue....Listening to the events unfold on the sqawk box, there was a broadcast, unencrypted that made mention of a VCAT officer's telephone number and vicinity.

Sloppy, as you can wait to get your numbers after, roll up on a house, and it doesn't matter if perhaps there was someone listening with a keen ear and the foresight to keep records. I'm really hoping it was a negligent discharge that tipped them off (and more so hoping someone just heard the approach)...not a scanner or one of the dispatchers.

It sucks a cop was shot, but at least the city is moving forward with the Jim Crow toll lanes. Thankfully this will keep the blacks from moving to the northern suburbs, and off the upper crust toll lanes. There won't be a safer, more lilly white path to travel once this gem is built.
Thanks Smokey Bissel and Nambla Ned Curren for helping keep the Man down....

As Cedar has said from time to time VCAT guys are top shelf. I know a couple of the guys and they both have military backgrounds. Not to slight the female member but.... well never mind.

Yup...the female shot herself in the foot. King Putney is in cover up mode. The female is the one they didn't want on the team and were forced to have her. I'm sure they're loving it now. Maybe she will go sell tasers now.

Instead of speculating on what happened, let's give that officer the benefit of the doubt. I have trained with her and assisted VCAT with several warrants. She is solid on the range and treats us lowly patrol officers respectfully. I would take her as a partner over may others out there. Glad she is OK and hopefully her recovery is quick.

I don't know much about VCAT but I do know they don't make a move without having "eyes" on the suspect, knowing that he's settled down and in chill mode before they hammer the door. Even the casings being in just one area shows they were caught off guard and all standing together.

4:32. Not sure what picture you are looking at but the brass is all over the yard. No they were not standing all together. Wait on the factual details to be provided to understand what happened.
Let's also give the officer wounded the benefit of the doubt. I hear she did not shoot herself. Regardless of the outcome, she has always treated us in patrol with respect unlike some of the other VCAT members. She does not employ the SWAT/VCAT or NOT mentality.

She did not shoot herself in the foot. Does the rumor start because she's female? Jealousy? I don't know. They did a good job out there. Haters gonna hate...

Anon: January 5 @ 5:05. If you believe that a truthful report as to what happened. Then I have some ocean front property in Arizona. Putney Will not provide any truthful information.

12:30, did I say factual details from Putney? Everyone knows an officer or two that were there. Those are the details I am talking about.
Regardless of his intentions, Putney has played up the officer's in the news and kept the media in check. No negative spins from the department on any of the shooting.

Putney is a two faced liar. He will play whatever suits him better at the moment. I don't care about VCAT record. They are just as dirty as Putney.

WSOC just figured out VCAT Officers don't wear body cams. Of course they are making out big news on that. Wait till they figure out VCAT take home units don't have dash cameras either.

Why can't they wear body cameras everywhere they go? Maybe they could all wear helmets with go pros on them! Maybe they could all have a videographer follow them wherever they go recording every waking minute?? Oh wait, even if the event is captured on video "they" claim that the footage is altered somehow. Give me a break...where does it end?!? Maybe we will hear from Waddling Todd Walther down at the 'ol FOP about these developments?!?

7:25 (& I guess 8:31) CMPD and City council told all taxpayers that ALL CMPD officers were now outfitted with body cameras we paid for. Of course is should be an issue. If there were a reason VCAT and other specific people should be exempt that should be clear before telling the big lie that forking over this particular pile of money would solve all the problems because ALL officers would be covered. I don't know if it's a great idea or not so I'm not commenting on that. I'm commenting on the continuous stream of b.s. from the police chief and city manager used to pry more $ out of our pockets.

What's going on with dash cams for the future?

I think Cedar posted a story about VCATS sometime ago then it vanished. In it he pointed to some infighting between a number of the officers and supervisors. As far as body cameras can't see why not. I would have personally liked to watch the out gunned idiot take 40 rounds from VCATS.

Making it public might help the next one to rethink that approach in dealing with the cops.

WWB ?? Where was Bellamy… mustard stains and all !

Yeah there is no way she shot herself in the foot given the nature of her wound. Period.

Maybe BELlaMy shot her ! Where was he ??? This needs to be investigated.