From the Rock Hill Herald:

The North Carolina ex-con who boasted he would never go back to prison before shooting a Charlotte police officer in a Fort Mill ambush in 2014 was sentenced Wednesday to an additional 25 years in prison.
James William Lewis, 33, who has prior convictions for drugs and car theft, will serve a total of 34 years in custody. He had been facing up to life in prison after he ambushed Charlotte-Mecklenburg Police Officer Shane Page on Jan. 7, 2014. Lewis was hiding at his girlfriend’s home in Fort Mill. 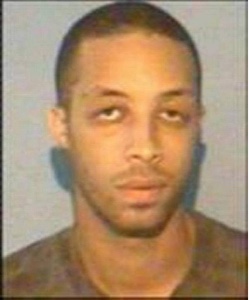 James Lewis
The girlfriend, Kirstie Barratt, 23, served about 21 months in prison until her release in October for lying to officers and leading them into the ambush where Page was shot in the abdomen, pelvis and shoulder.
Lewis was wanted for the armed robbery of a Pineville, N.C., restaurant where he once worked at the time he shot Page. A violent criminal apprehension team that included Charlotte officers and York County deputies, along with state and federal agents, were at the home searching the house when Lewis ambushed Page.
Several officers, including York County deputies, returned fire at Lewis after Lewis shot Page. Lewis was wounded in the legs.
Lewis admitted he did not want to hide “like a puppy” and told police after the incident he wanted to be shot so he put himself in a position with the gun near the door. Lewis admitted he had his gun pointed at the officer and that the officer had a right to shoot him.

Cedar's Take: While Lewis will serve his 25 year Federal Sentence after his 9 years he is already serving, he deserved the maximum life. Currently there is no federal parole option so he'll serve the entire 34 years. But given Obama's hug a thug program expect he'll see daylight again and frankly he'll not last a year before he'll try to kill again.
Posted by Cedar Posts at 6:51 AM