Just something about a girl with a gun. This one is also pretty hot, and apparently looks a lot like actress Anna Kendrick below.

Sadly the FBI is now targeting the 20 something and it won't be long before she is confronted with over whelming force and taken down. At this point the best we could hope for is a surprise take down and no shots fired.

From the FBI release:

The FBI, in conjunction with state and local law enforcement agencies, is seeking to identify two suspects who are believed to have been involved in multiple jewelry store robberies in Florida, Georgia, South Carolina, Tennessee, and North Carolina.

Most recently, on Monday, January 4, 2016, at approximately 10:36 a.m., a White female suspect in her late 20s or early 30s, approximately 5’8” tall and 130 pounds, entered a Jared Vault location in Mebane, North Carolina, and displayed a handgun. The suspect forced two employees to a back room at gunpoint and zip-tied their hands. She then returned to the merchandise area, removed various items from display cases, and placed them into a shopping bag before exiting the store and fleeing in an unknown direction.

From NBC: The female jewel thief targeting stores across the South has stolen millions of dollars worth of bling and is probably part of a sophisticated ring, (no pun intended) investigators said Wednesday.
The brazen young woman, working with a male accomplice who was also caught on video during the stickups, has already robbed six stores since April, prompting the FBI to launch a manhunt.
"This is a very unusual case," Special Agent Lawrence Borghini of the FBI's Jacksonville, Florida, office told NBC News. 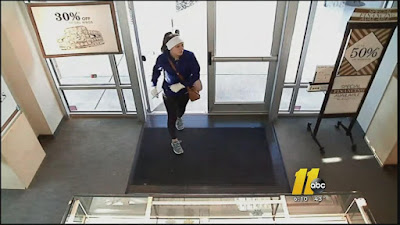 A jewelry trade group has declared her "Public Enemy No. 1" and put out a $10,000 reward.
"She's a very, very bold criminal," said John Kennedy, president of the Jeweler Security Alliance.
All the heists follow the same, carefully orchestrated pattern.
The woman cases a store, then comes back the next day and casually chats with workers about an item. Suddenly, she whips a gun out of her purse and forces the employees to a back room — where she steals their keys and uses zip-ties to secure them.
"At that point, she'll go back to the merchandise area of the store to lock the front door," Borghini said.
"Then she'll retrieve some shopping bags from her purse...and start loading various high-dollar value items, typically diamonds and watches, from the jewelry store." 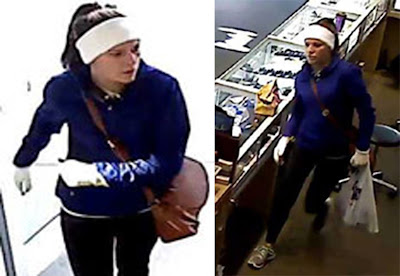 Outside, her getaway driver is waiting, in a car with dark-tinted windows and temporary or dealer tags. Kennedy said she uses an earpiece to communicate with him.
"He is definitely involved in all the robberies because she is not doing these alone," Borghini said.
A week ago, a manager at a store in Georgia realized who she was and "upon realizing that was not a good situation, [the thief] departed," Borghini said.
Kennedy said he's never seen a robbery pattern like this one in his decades-long career.
"Usually you have a gang of males will go in — occasionally they'll be accompanied by a female — but to have a lone female go in is extraordinarily rare," he said.
Cedar's Take: Beyond her hotness and the fact that she is playing a crazy dangerous game. There's also something about her methods. First she's not targeting upscale jewelry stores, sticking to Jared, Reeds and Zales who all are low end mass market junk sellers.

By staying away from the super high end stores with designer jewelry she avoids the problem of stealing items that are hard to move. So she's either super smart or has some talent giving her direction and guidance or she just thinks "He went to Jared's" is a cool marketing campaign.

My hope is that she stops, or at least moves on out of the south or better yet takes her career of choice across the pond and then maybe south for the winter. I hear fitting in down under is pretty easy.
Of course its doubtful she's banked any of the money and whatever drove her to go down this path isn't going away.

The robberies have occurred in:

She's staying away from big cities with major police and tactical units. Avoiding jurisdictions that have large amounts of street surveillance and traffic.

Plus Woodstock and Dawsonville, Georgia are bedroom communities of Atlanta. But Bluffton, Mebane, Sevierville and Panama City Beach are all 4-5 hours from Atlanta and near major interstate highways.

Let that marinate a while. Yep this is a Georgia girl. The Mebane heist is an outlier but all the others say Georgia. If I was the FBI I'd scour the UGA facebook pages.

The FBI Wanted Poster is here.

This coal burner will be eating at the Y for the next 3 years when she gets caught. Can you imagine how diseased this tramp is? Her mom should be slapped into next year.

Coal burner such a lovely term. No proof she banging the black dude in fact if Cedar's info is correct he's not been seen lately so she may have decided she didn't want to share any more of the take. Also, expect she gets more than 3 years.

I'd Hit It and then I'd hit it again and again. Harder every time!

The "coal burner" guy again? �� He sure likes posting about this story, even though it's unknown whether the girl and the black accomplice are romantically involved. Very insecure individual; he likely uses the phrase "our [white] women" over 70 times a day.