The twitterverse is a crazy place where you often stumble across something, and it leads you on a quest to know more or in this case to chase your past. 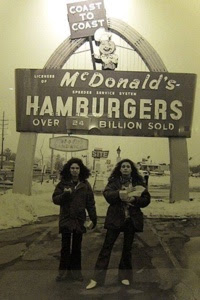 Submitted for your consideration, a photo of two stoners scoring burgers on a cold January day in Des Plaines, Illinois.

The Stoners just happen to be David Lee Roth and Eddie Van Halen. Like I said a couple of stoners, who just happened to be making the first stop on a 10 month concert tour that crisscrossed the US and Europe in 1978.

Now the back story:

Before you get excited no I didn't burn one with the guys from Van Halen nor would I have recognized them back in 1978, and jeez that was a life time ago.


You see for some reason my parents saw fit to move the family to Des Plaines Illinois during this part of my childhood. By the way it's Dis Plaines not Da Plaines. It wasn't a fun move, being uprooted from all that was familiar. On the bright side there was this McDonald's down the street, yep the one in the photo. My Junior High school, even served Macky D's burgers once a month in the school cafeteria from this same store.

Now this location was not the first McDonald's but it was the first Ray Kroc McDonald's. Sadly they demolished the building in 1984. Then soon after tearing it down they realized it was a tragic mistake so they rebuilt it just like it was and today it serves as the McDonald's Corporation Museum.

Seems Des Plaines has a habit of tossing aside the old. The school district also did away with my Junior High. Ditto, the high school that I attended for two years before graduating from South Meck in Charlotte.

So for two years I was a stoner at Shermer High School. Actually it was called Maine North. Yep life in the Chicago burbs serves as a nice contrast to my pickup truck life back in North Carolina.

If the name "Shermer High School" sounds familiar, that's because it should, for Shermer High aka Maine North was the film location for the movie The Breakfast Club.

Know this, TBC portrayed high school life exactly the way  it was in the late 70's and early 80's. No cell phones to reach out to parents and no endless texting between you and your friends. In a way it made us so much more independent than kids today. You missed the bus? You walked home. Forgot your lunch you didn't text mom, you relied on friends loan you money or share their lunch with you.

As in the film so was my life, you were this or that, with them or them or heaven forbid them. I was somewhere between a John Bender and a Andrew Clark. But I knew many real John Benders and frankly the stoner crowd was more to my liking that the jock crowd. I played baseball and ran cross county but really never fit in with the hard core jock crowd, at the same time I never really embraced the "get high at lunch" crowd as they drifted towards cocaine and acid. But I sure did my fair share of babysitting my acid tripping friends.
The other strange thing there are no Asian, Hispanic or African American cast members in "The Breakfast Club" do you know why? Because Maine North didn't have any minority students. Can you imagine that an all white public school?

The movie "The Breakfast Club" is so accurate that it often pains me to watch it. My Mr. Veron once suggested that I drop out and take a job as a hourly laborer at a steel mill because there was no way I could get into college.

Like so many teens when I left high school for the last time I left behind a hundred friends never to be seen again. And to think, in my life I had to do that twice.

At the end of The Breakfast Club Mr. Vernon reads the result of the essay assignment written by Brian Johnson appointed by the five. Its done in a voice over of each student:
Brian Johnson: Dear Mr. Vernon, we accept the fact that we had to sacrifice a whole Saturday in detention for whatever it was we did wrong. But we think you're crazy to make us write an essay telling you who we think we are. You see us as you want to see us - in the simplest terms, in the most convenient definitions. But what we found out is that each one of us is a brain...
Andrew Clark: ...and an athlete...
Allison Reynolds: ...and a basket case...
Claire Standish: ...a princess...
John Bender: ...and a criminal...
Brian Johnson: Does that answer your question? Sincerely yours, the Breakfast Club.
The closing camera shot is that of John Bender, walking across the football field, his swagger in full display and defiant as ever his fist raised in victory. 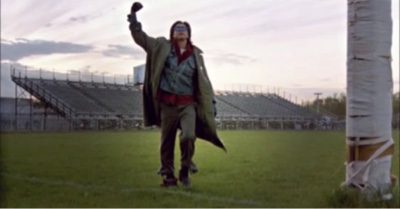 Funny I can't count the times I walked across that same football field, ran laps on the track, froze my ass off on aluminum bleachers for fleeting moments of passion during a November high school football game.

Seriously, I live for today and seldom in the past but every once and a while I drift back in time. Till I realize I miss my friends, I miss my youth, I miss being utterly miserable in high school and not knowing how good it was.

As for Van Halen yeah I still like the song Jump!
Posted by Cedar Posts at 6:30 AM