"Fuck the Police" is a protest song by the gangsta rap group N.W.A that appears on the album Straight Outta Compton as well as on the N.W.A's Greatest Hits compilation. It was ranked number 425 on Rolling Stone's list of the 500 Greatest Songs of All Time. Protesting police brutality and racial profiling, its lyrics express approval of violence against police.

The song provoked the FBI to write to N.W.A's record company about the lyrics expressing disapproval and arguing that the song misrepresented police.

“Fuck the police / Coming straight from the underground / A young n***a got it bad ‘cause I’m brown / And not the other color so police think / They have the authority to kill a minority / Fuck that shit, ‘cause I ain’t the one / For a punk motherfucker with a badge and a gun / To be beating on, and thrown in jail / We could go toe to toe in the middle of a cell / Fucking with me ‘cause I’m a teenager / With a little bit of gold and a pager / Searching my car, looking for the product / Thinking every n***a is selling narcotics.” 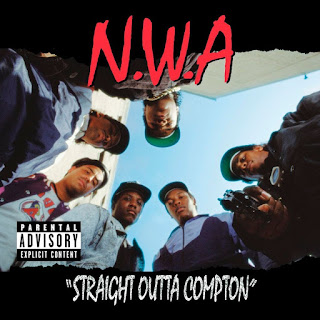 Twenty-seven years after N.W.A.'s the Straight Outta Compton album was released, not much has changed says the rapper Ice Cube. N.W.A’s music — and “Fuck tha Police” in particular — felt like a foretelling, drawing a direct line to the way that black kids were being treated in major cities. Cube, who wrote the song when he was a teenager, is now 46 years old, yet he can’t say he’s surprised to look around and discover that the social discourse committed to tape back then is still relevant now.

So how strange is it the CMPD's Command Staff would pose for a photo with the writer and rapper of those lyrics, ICE CUBE? 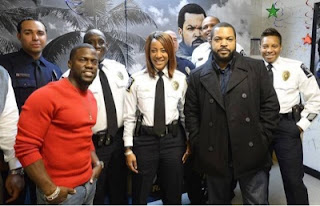 Maybe teaming up with Ice Cube and Kevin Hart is the new "community policing" effort made by CMPD?  Or maybe it sends the wrong message?
During Chief Monroe's watch he continuously denied that Charlotte had a "gang problem". Insisting that gang like crime just local trouble makers "run amok" that could be easy to corrected with the adoption of a juvenile curfew and expensing taxpayer dollars on shot spotter,  cameras mounted on street lights, Tasers and license plate readers.
Even in the face of mass arrests by ATF and the FBI Monroe discounted gang violence in Charlotte arguing that it was only an isolated incident. Monroe also took a stand against police brutality in the Jonathan Ferrell case, but left town as the case neared trial and the real facts began to be uncovered.
Perhaps CMPD is thinking outside the box, having black command staff stand shoulder to shoulder with the author of "Fuck Tha Police"?
The song is the national anthem in cities like Baltimore, Ferguson and Detroit for anti police protesters and the Black Lives Matter crowd.  But search YouTube for "Fuck CMPD" and get ready to be bombarded with profanity and hate directed at Charlotte's Police Department.

For better or worse, “Fuck tha Police” still works today. Lyrics written nearly three decades ago feel contemporary as activists assemble in places like Ferguson, Baltimore, and Cincinnati, taking on local police and demanding answers for the body count of young black men at the hands of police officers.

“Nothing has changed with their behavior with our community. That’s why it’s so poignant, like the song was written yesterday. It’s really up to us as a society to hold these dudes more accountable and get them indicted and prosecuted and arrested and thrown in jail for breaking the law,” Cube said. “We got a movie about history that feels like it’s present day. I don’t want, 20 years from now, we look at this movie and say, ‘Damn, this was predicting the future.’”

“Now is the time to put our energy into getting these dudes prosecuted,” he continued. “It’s always been sad. It was sad in ‘89, you know? It’s sad now, it’s uncalled for in a lot of cases. For all the statistics they have on crime, you still got a majority of people in the ’hood that don’t do crimes. So stop painting us all with the same brush and treat us like law-abiding citizens that most of us are.”

The rapper hopes that the film will emphasize the lack of progress that’s transpired all these years later. In Straight Outta Compton, he thinks it’s clear why he wrote “Fuck tha Police” and gave voice to the kids who needed it most.

“We wanted to highlight the excessive force and … the humiliation that we go through in these situations,” Cube said. “So the audience can know why we wrote ‘Fuck tha Police,’ and they can feel the same way.”
Posted by Cedar Posts at 10:55 AM

Thank you!!!
My department is dead and gone. Today's CMPD is no longer focused on the community. It's not "diverse" as anyone with common sense can see by looking at the new recruits. We hired a black chief who was to represent a bridge to the community. His failed leadership, arrogance and decisive action to Caucasian officers is the legacy he left behind. He was by far the best example of why the city should not hire based on race alone. He never qualified for the position to begin with because he lacked a college degree. Today the city hired from within, they most definitely hired another black chief to quail any future racial relations. I don't think it's going to work. I recall a time under Stephens when we were all cops, we shared the same color of blue and the common goal of peacekeeping. I don't see it anymore.

It is sad to see the continued decline of this once great police department. I saw the writing on the wall years ago as people who were not even qualified to be good solid cops within CMPD were being promoted way beyond their capabilities. CMPD is now reaping what it sowed. I'm glad that I left for another agency when I did. There are great agencies with excellent leaders out here in this big world! I know because I work for one now.

Keep it classy CMPD, again more double standards in Charlotte government. I saw channel 9 news had a story on the Charlotte Fire Investigator fired after brining up safety issues in the fire dept. Good for her and I hope the city pays a lot for the disgrace they did.
But let's put up a mural of this photo on the side of CMPD headquarters and show the community " F*ck tha Police

Stupid is as Stupid Does. This is all the elected officials within Charlotte city council.

Now you would think with all the Canuks who have moved to Florida over the last decade they would know the difference. cyclone fence