Wouldn't your know it, The Queen City finally gets a "franchise" quarterback, who leads our football team to the Super Bowl and he's ........ ?

He's good, hell Cam Newton is better than good. But frankly he's just an odd .... and that part just keeps getting worse.

I'm not a Cam Newton hater, I wasn't a Kerry Collins or Jake hater. So forget the haters will hate label.

Cam will say its because he's an African American Quarterback. Well bud that ain't why.

Sam Mills lived down the street from me, I always enjoyed bumping into him at the grocery store or out on a morning run, and Steve Smith, Sr. 89 is the only Panthers Jersey I'd ever wear. Both top my list of great Panthers players and wonderful citizens of Charlotte.

Because they never boarded a team bus dressed like this! 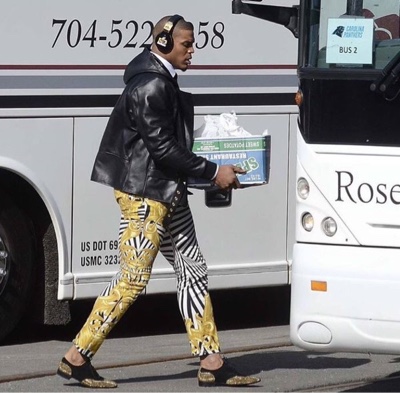 Versace pants that retail for more than $800.00 and the shoes I'm pretty sure they're by Jimmy Choo and sell for around $1,100.00.
They never showed up at the weekly presser wearing eyeshadow and eyeliner either. 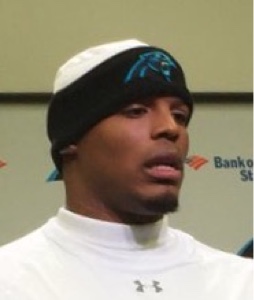 (Can't wait for the SNL skit next week "cross dressing quarterback wins super bowl" But that's not the problem.) 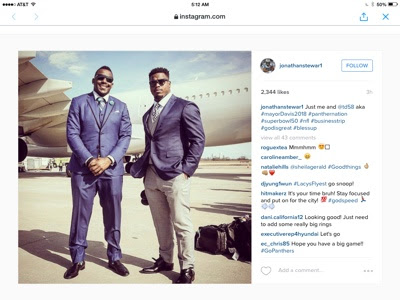 And Cam Newton was silent.

Take a list of Charlotte's top 50 celebrities and ask yourself who would you most like to sit down and drink a beer with?

Sure Dale, Jr comes to mind at the top of the list, Greg Olsen, Luke Kuechly, Mugsey Bouges? But Cam Newton doesn't appear on the list until well after former mayor Pat McCrory!

Bet he Cries like a little girl when the orange crush beats his The pants off of him.

Unless someone convinces him to change, he will once again wear a towel over his head during the national anthem. Notice that he is also too good to place his hand over his heart, all while the flag of our nation is displayed, military honor guards present, and veterans in attendance. I have no use for him, and it's not because I've never seen a black athlete like him. Some fools will try to say he is singing the anthem, but he's actually just chewing gum.

Cedar hope you remember that Steve Smith punched two of his teammates and was charged with only one. So if there is a thug Smith would be at the top of the list

Several weeks ago the image of a cartoon Barrack Obama appeared with stereotypical ethicnic features, lampooning his trip to Europe.wood privacy fence