Is anyone really surprised that Cam Newton is as ungracious in defeat as he is in victory? 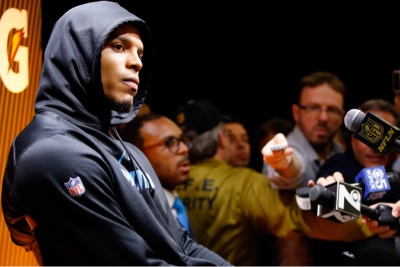 Hoodie up over his head, his pockets no doubt full of skittles, Newton sulks during the required presser, he had met his match and then some. It wasn't just losing the game, going down in defeat or that the Broncos played better, the Panthers were totally blown away. And you had to see this coming,

The only explanation is that, Karma jumped off the plane in San Jose and jumped all over the Panthers during the Super Bowl. How else to you explain a field goal attempt hitting the uprights with little or no wind? Karma didn't waste any time with fumbles, sacks, yellow flags all over the place, either. Then Karma looked at River Boat Ron's challenge and swatted it down like a Zika Virus Mosquito. (Call it collateral damage? Rivera's challenge record near perfect in the last ten games)

"If you don't like our dancing don't let us score", taunted the League MVP, and the Broncos did just that. Fans hoped that the second half and a extended half time pep talk would cure the woes but the Panthers came back to the field worse in the 3rd quarter and the Broncos were better.

For most of the second half Newton looked like a birthday piñata being struck again and again by a group of small children, the only thing missing were the zebra stripe and gold pants.

After 60 minutes of ugly and Newton rather than thanking the fans, the coaches, the City of Charlotte, or even his mother; showed the camera who he was during the post game interview.

His 80 words, most barely audible monosyllabic answers to the gathered scrum of media looking for blood or maybe just answers. 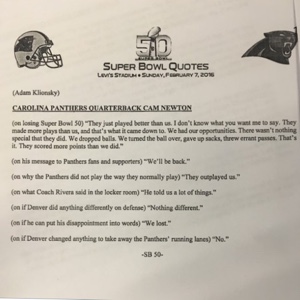 After 2 minutes slipped by,  just enough to please the league and without an apology Newton stood up and walked away.

Even Cedar's advice to Cam "All Glory is Fleeting" didn't take into account the swiftness of Karma, for it hints at old age, and time taking its toll. No, this was an epic smack down. Newton had been hit so many times that he finally backed away from jumping on the grenade of a fumble, his own fumble as if it was kryptonite.

For Cam Newton there's always next year, but he should look around many of these guys who don't have next year, for many this was it. Richardson looks frail, one assistant coach is battling cancer, a number of players are at the end of their contracts, some with just one year gigs others are simply aging out, and for them there is no next season.

Maybe Cam Newton ought to let that marinate a little before he dabs in the end zone or pulls out his selfie stick.

Maybe he'll think of the PSL holders before he smirks another because I'm an African American Quarterback answer or pause before reading off a fine discourse of excuses to remember those fans who skipped a week's worth of lunch just to buy a Panthers Number 1 jersey.

Then again why would he?
Posted by Cedar Posts at 1:16 PM

Cam was so right...ain't never seen a Black QB like him...

Ibet you are loving this Cedar. Don't know anyone who hated Cam Newton more than you. No surprise since your a racist bigot.

Are you mad Bro?

Yo $Cam, pull dim pants up off yo ass bro!

How do feel to lose, hommie?

Stupid ass thug! Get your monkey ass off the field! You Trayvon Martin wannabe.

Cam=choke! Seems the Super Bowl was nothing like an NCAA championship game. A season filled with trash talk, stupid moves, dances and poses. He couldn't deliver during the big game. Try not to roll your pickup again in the off season Scam............you may have "chosen" as a passenger next time. Please put your superman impression away for good. You were nothing of the sort eating all that turf!!!!