You can't blame them, Charlotte City Council members, for "punting" the toll road issue. Which is just want Pat McCrory wanted so he could do the same. But council's yes vote kept the ball or in this case the driverless carriage rolling.

As the weeks have clicked by details seem to seep out like polluted water from a Duke Energy Ash Pond.

This Friday morning John Autry who is running for the state representative job in district 100 got a little testy when I linked him to the Cintra Mobility Partners deal because of his yes vote.

Of course councilman Autry would say that after getting a swift poke in the eye like this: 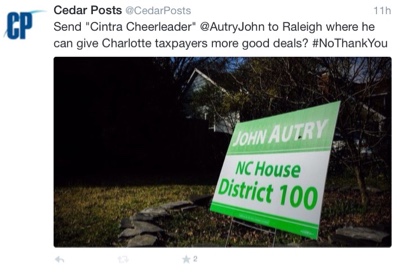 The reality is this: "No need to conflate anything your YES vote said "works for me". Fact is the Cintra Contract is as bad as the concept"

In directing Lyles to support toll lanes, council members said they weren’t specifically endorsing toll lanes on I-77. But their vote allows the project to move forward."

Read more here: http://www.charlotteobserver.com/news/politics-government/article54196190.html#storylink=cpy
Autry's position is he didn't approve of the contract only the "managed lanes" concept. Fair enough, but if that was the case a No Vote with an asterisk would have been wise, vs a Yes Vote with an asterisk. We need smart people in Raleigh no point sending another dumb ass.

Speaking of dumb asses. My Grandfather said it best. "Its OK to hire a lazy smart man, or a hard working dumb man. But God help you if you ever hire an energetic dumb ass." Ditto for sending politicians to Raleigh.

Cedar's Take: It is the people who live in the Lake Norman area and work in Charlotte who are to blame for the daily traffic nightmare. Therefore, they should step up and pay for the extra lanes that are need to handle the increased traffic flow.

This has always been and still is my thought on the issue. I'm also convinced that Charlotte and North Carolina are hunt by the twice daily grid lock. The entire state economy grinds to halt because of the traffic. Its is costly and prevents growth.

The developers have long since departed, made their money grabbed their carpet bags and headed home.

But the managed lane concept is a failure. I've seen an example of this in Atlanta and the bankruptcy of Cintra's subsidiary in Texas is the hand writing on the wall.

In Atlanta people refuse to use the high priced lanes, and the PeachPass entity controlled by Cintra refuses lower the price to expand usage because their model and matrix suggest raising the prices instead. Its all counter intuitive.

But the fact is at peak drive time the lanes are empty. In other words people see it as pay to drive but you can park for free program.

Here's the problem with the VIP Lane concept, Cintra thinks that a certain percentage of the public makes enough income to pay for the privilege of riding the "special" lanes. But that concept is about as useful as the airlines first class section. Most of us would love to ride in first class but when the price is triple or even double we'll just suck it up.

But its not just the working class, even the well off crowd avoid the lanes in Atlanta. The bottom line is just because a man can afford a $100 hamburger doesn't mean he'll ever buy one.
Posted by Cedar Posts at 11:36 AM

Autry is a total bum. (Nicest thing I could think of) If he wins on Tuesday he'll be heading to Raleigh since no republican filed for the seat being vacated by Tricia Ann Cotham.

The good news he'll be useless as tits on a boar. The better news is at least he'll be off Charlotte City Council where has was just as useless.

As a point of reference he was a little more coherent than Vilma Leake, but not by much.

John Autry is a useless dumbass who can't add two numbers together and come up with the correct answer. He is a cheerleader for every tax-wasting corrupt project some loser can bring to him from the corrupt film idea for Eastland on down the line to this Cintra contract he voted to let ride right through our pockets for years to come. He has no understanding of how business runs. He has no understanding of many things.

He is stupid. Really stupid. He is a liar. He holds himself up as one type of person and a hippie all-loving fight-for-everyman representative of the people, but he is as corrupt as the rest of the City Council and if elected will go on to cause bigger badder problems for Charlotte and NC. Maddalon is not much better. And no Republican is running.

It would have been great to have some extra warning to be able to choose an able representative to run to fill the vacated seat.

We are in a world of shit. There are very few intelligent and honest people in this state and in Charlotte in political positions or any civic positions.

If he is in Raleigh he will not be in Charlotte. Maybe he can take the HR Director with him that changed the finance rules to get him payed early. Corruption lives on with the Curt W. Gang. What's left of them.

Hopefully he will be elected and we can get someone on Council that will do what they promise and care about the employees and citizens as much as they claim to.

so, even if that happened, that would make ONE Council member fitting that description