File This Under "Stupid Is As Stupid Does"

There's a lot of talk about how Black Lives Matter and how racial profiling by police is unfair to African Americans. Well, ok. But how do you explain this amount of stupid? 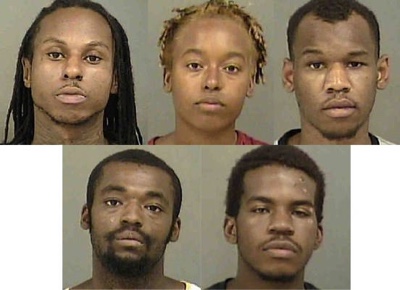 Five people were arrested Friday night after trying to break into an uptown Charlotte townhouse twice, but the second time police were inside investigating the first break-in.

Friday evening, a man reportedly came home to find people inside his townhouse on Garden District Drive, in the middle of a burglary. He was able to back out of his home, without them noticing he was there, and call 911, according to officers.

"I can just imagine him walking in there, not noticing that. It'd be a much different situation," said Kathryn Ruland, a neighbor concerned after this break-in.

Charlotte-Mecklenburg police arrived while the two were still in the house and arrested them. Police identified the two as 33-year-old Johnny Penny and 24-year-old Javonte Cathcart.

Without knowing that police were still inside the townhouse investigating the break-in, three more people returned to try to break into the home about two hours later. Officers said the three tried to run away, but were quickly apprehended.

After hearing about this, neighbors say they're now going to be extra alert.

"You hear stuff like this, and you have to be more precautious even in a nice neighborhood like this," said Jhane Johnson, who also lives near the house where this break-in happened.

Worst case of entrapment I ever saw. You know if you just leave your stuff out in your locked up house like that you're just inviting people to come over and steal it! And didn't these officers violate King Putney's policy on stopping and speaking with blacks?? Doesn't matter anyway, they will have the charges dismissed, plead down or given a really stiff unsupervised probation period. Viva New America!

Lawanda and Mayor Jim are proud as a peacock this AM. The only thing better in their eyes would have been the homeowner get shot, kidnapped, and left on the side of the road (Oh, that was another crime from the weekend).
Maybe Autry or Councilman Al will blame this on Post Traumatic Slave Syndrome, again.