You knew from the "get go" as they say in Gaston County, where this story was heading, but you really hoped for a surprising outcome. 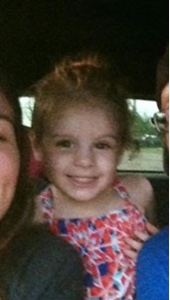 Police believe the toddler was dead before she was put in the woods.

This afternoon police and the FBI remained at the home and in the woods behind the home collecting evidence. Volunteers who had gathered to help find the girl early in the day didn't want to leave hoping against hope that something would change. Perhaps they found comfort in their shared grief.

The mother Jaylene Dumont was no stranger to police, who have made a trip to the home that she shared with her boyfriend "Billy" 49 times over the past 3 years. Police say she is not a suspect at this time.

On Monday and Tuesday Gaston County police fire and medic as well as more than 100 volunteers searched for 3 year old Jordan before suspending the search over night. The search resumed at daybreak with police finding her body partially hidden in the woods behind her home just before 11 am.
The story is always the same, the mother is at work and the low life boy friend left at home to watch the child drinking beer watching television. The child goes missing and the boyfriend claims he was asleep. The mother comes home and becomes hysterical, the boyfriend does his best act concerned.

The cops show up and they already know they are looking at a killer. They too hope otherwise, but they know.

You can dismiss a lot of the violence you see in the news, but this is hard to wipe away.

Let's see what the police reports were for, how many crimes were ignored, how many times DSS should have removed the children, how many times police should have locked the boyfriend and/or mother up and didn't-- and maybe judges and DA's too--and then talk about the usual story.
This poor little girl shouldn't have died and it sounds like one person is physically responsible but many people directly responsible as well. It's sickening and sad and common.
Maybe cops thought it was a "domestic dispute."

The so call "mom " has went and visited the pos that killed her baby!

Thank you for this..coming from Gaston co. Nc you worded the opening perfectly n its all true. We are still in disbelief and protesting dss. Hopefully mom is behind bars soon. N yes Mom did visit him for 15 mins. Now there's a gag order in her case in nc. I think something big is coming as full autopsy is due anyday.