US Coast Guard Cutter Makes Quite A Splash 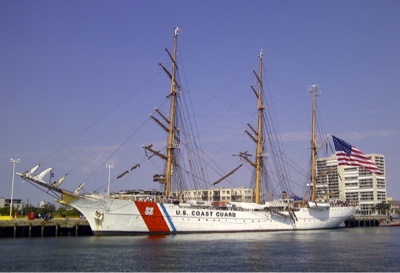 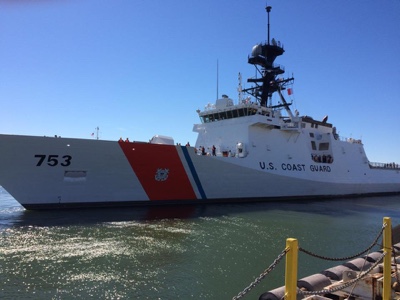 Apparently not wanting to be upstaged by the eloquent Eagle Hamilton departed Charleston Harbor making a high speed run past the Eagle and Patriots Point Marina on Friday evening.
The 15 foot rolling bow wave hit the marina, home to several hundred yachts with such force that it caused countless boats to receive damage.
According to witnesses, the wake of Cutter Hamilton sent people on the dock feeing for their lives. As the huge wave crashed into the marina it tossed small boats around like toys and put a huge crack in the hull of a 80 foot Horizon motor yacht.
One charter boat captain called the ship to say their high speed pass just waked an entire Marina. TheHamilton's  crew responded with a short "What Marina?", of course by the time the crew of the Hamiton noticed the marina it was already 2 miles behind them.
Coast Guard Sector Charleston's radio came alive as boaters ramped up their anger. VHF Radio Channel 17 with a phalanx of obscenity laced tirades. Eventually Secton Charleston radio watch hailed the cutter asking them to switch to a secure frequency.
Saturday found Coast Guard staff calling boaters who had logged formal complaints. Apparently the commander of the ship called a dozen owners offering his apology.
Claims for damages could easily top $100,000.00 said a marina staff member.
Posted by Cedar Posts at 4:56 AM