Anyone Surprised That Bill James Would Use Water Canon On Protestors 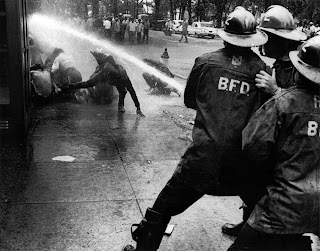 From the Charloote Business Journal:

James wrote in an email (post protest) that water canon would be a good investment.

“I think the CMPD needs to buy a military style water cannon. It seems obvious that most of the protestors paid no respect to the police or their instructions. Jennifer Robert’s whining on TV just sounded desperate.

They looted, stole, started fires and damaged property at will. Like Ferguson and Baltimore, emotions were rationalized by their supporters as an acceptable reason for rioting and vandalism. They ‘felt upset’ so they thought they had a right to create mayhem.

Until the CMPD and the City show they are in charge the mass of criminals won’t change their ways. This wasn’t a ‘protest’ (since there was no ‘book’ there was nothing to protest).

This was a riot a bunch of criminals flaunting the law. It would be nice to know how many of the protesters were from out-of-town.”

The images of Selma and Birmingham during the sixties come to mind and it's not pretty.
Posted by Cedar Posts at 12:37 AM