Yesterday Kathleen Kane was given slap on the wrist for using her position as Pennsylvania's highest ranking law enforcement officer to rage a personal war against those who crossed her. She was facing up to 24 years for trying to cover up the misdeeds and lying to a grand jury. 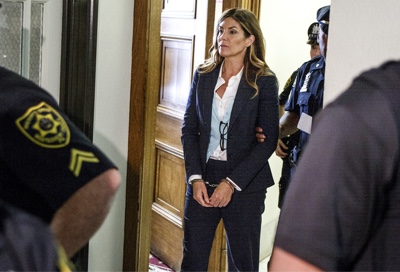 But the story ended up being buried on page 12 of the New York Times. Had she been a republican from a neighboring state given an active prison sentence this photo (above) would have been on the front page.

Instead The New York Times ran the story with this photo (below), on page 12, because she is a democrat and Hillary Clinton supporter. 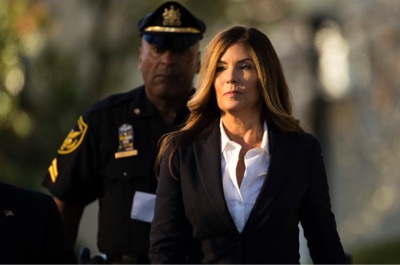 NORRISTOWN, Pa. — The brief, unlikely political career of Kathleen G. Kane, Pennsylvania’s brightest rising star when she was elected attorney general less than four years ago, came to a humiliating close on Monday when a judge sentenced her to 10 to 23 months in prison for her conviction on charges of perjury and abuse of her office.

Ms. Kane, 50, rose to power as a Democratic outsider with no political experience, vowing to shake to its foundations the state’s male-dominated, corruption-prone political establishment that she mocked as “the Harrisburg old boys.” At times she succeeded, forcing the ouster of State Supreme Court justices, prosecuting government officials and clashing repeatedly with one of her predecessors, Tom Corbett, a Republican who had become governor.

But she soon created a scandal of her own, illegally leaking grand jury records in an attempt to discredit a critic and then lying about it to a different grand jury. In August, a Common Pleas Court jury here found her guilty of two felony perjury charges and seven misdemeanor counts, forcing her to resign from office.

She broke down in tears on Monday while testifying at her sentencing hearing, pleading with the judge to consider her two teenage sons.

“Maybe I deserve everything I get; they don’t,” she said. “I am not going to ask for your mercy because I don’t care about me anymore.”

Called to testify on her behalf, her son Chris, 15, said: “My mom is like my rock. We just know that we can’t lose our mom.”

She faced a maximum sentence of 12 to 24 years in prison, but her lawyers argued that the loss of her career and reputation was punishment enough.

Judge Wendy Demchick-Alloy, however, said, “Any lesser sentence than total confinement will absolutely depreciate the seriousness of the crime.”

Ms. Kane, who had no visible reaction to the sentence, will remain free on bail pending an appeal.

A daughter of a janitor and a secretary, Ms. Kane grew up in Scranton and worked there as an assistant district attorney, specializing in prosecuting sex crimes. She married Christopher Kane, whose family owns a successful trucking business; she and her husband are now separated and in divorce proceedings.

When she began her 2012 run for attorney general, she was considered a long shot, virtually unknown in political circles, but her husband put more than $2 million into her campaign.

Ms. Kane emphasized her status as the outsider and the only woman in the race. She charged that Governor Corbett, when he was attorney general, had dragged his feet for years over whether to bring child molestation charges against Jerry Sandusky, an assistant football coach at Penn State, who was eventually convicted.

After taking office in January 2013, she started an investigation into the Sandusky case. It did not find any misconduct in the way the case had been handled, but it uncovered thousands of emails sent by state officials with pornographic, racist or sexist content.

As Ms. Kane’s own legal fortunes deteriorated over the past two years, she released troves of bombshell emails, forcing the resignations of two State Supreme Court justices and some officials who had worked in the attorney general’s office under Mr. Corbett.

It was one of several battles she fought with the state’s mostly Republican establishment, at first earning widespread praise as well as condemnation.

In her first few months in office, she rejected Mr. Corbett’s plan to privatize management of the state lottery, refused to defend in court the state’s ban on gay marriage, offered only a lukewarm defense of a voter identification law, and exposed corruption at the Pennsylvania Turnpike Commission. She also gave a promotion to her twin sister — who had worked for years in the attorney general’s office — prompting accusations of nepotism.

In those first months, she also shut down a secret sting case that had started under Mr. Corbett and had recorded four state legislators and a judge — all Democrats from Philadelphia — accepting illegal gifts. A year later, when The Philadelphia Inquirer revealed that the operation had taken place and that Ms. Kane had shut it down, she faced claims of partisan favoritism. Ms. Kane said the cases had been mismanaged and too weak to prosecute; local prosecutors later proved her wrong, winning convictions against four of the five officials.

Her actions led to a feud with Frank G. Fina, a former top state prosecutor who had overseen the sting operation and the Sandusky case. Seeking to undercut Mr. Fina, Ms. Kane leaked to The Philadelphia Daily News information about a grand jury investigation he had been involved in — a leak that would lead to the criminal investigation of her actions.

Ms. Kane developed a reputation for trying to intimidate critics, and described herself as a victim of the entrenched boys’ club she was threatening.

Erik Olsen, the chief of the criminal prosecution division in the attorney general’s office, who was called Monday as a prosecution witness, described a campaign of “systemic firings and Nixonian espionage.”

“She created a terror zone in this office,” he said.

Jon Hurdle and Richard Perez-Pena a couple of unknown NYT staffers get the byline and props for shining a light on some of her Clintonisque dealings.

Cedar's Take: Get used to it sweetheart this is how democrats roll, even those who are caught are given a free pass.

Back in the day she might have been hot, I guess that's why the husband is cutting her loose?