A Baltimore woman who was removed from a Southwest Airlines flight by police after revealing a pet allergy with two dogs onboard has been charged in Maryland.
Anila Daulatzai, a 46-year-old professor at the Maryland Institute College of Art, faces charges including disorderly conduct, resisting arrest, obstructing and hindering a police officer, disturbing the peace and failure to obey, all stemming from the incident on Tuesday night, CBS Baltimore reports. 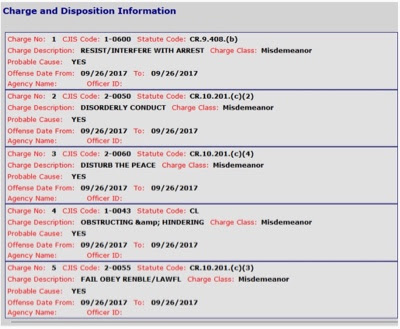 The incident occurred on September 26, 2017 as Southwest Airlines flight 1525 was set to depart at 8:40 p.m. from BWI.
Video of the encounter went viral and Southwest issued an apology to Daulatzai on Wednesday.
Upon boarding the plane, Daulatzai complained about an emotional support animal on board, claiming she was deathly allergic to the pet. Southwest officials say she was unable to provide a medical certificate necessary to prove the allergy.
An official from Southwest said that a customer without a medical certificate may be denied boarding if they report a life-threatening allergic reaction and cannot travel safely with an animal on board.
They say after explaining the situation, Daulatzai refused to leave the plane, and law enforcement was brought in to remove her.
"Come on, lady let's go," the officer can be heard saying in a video recorded by another passenger.
"My dad has a surgery! What are you doing?" Daulatzai responded. "I will walk off! Don't touch me! Don't touch me! You have ripped my pants off."
She can be heard screaming as others urged her to walk out on her own.
"She just lost control of the situation and she was way in over her head by the point that the police were trying to take her out," passenger Bill Dumas said. "It looks like police were being overly aggressive, but really she wasn't giving them much of a choice."
In the video shot by west coaster Bill Dumas, Daulatzai is clearly resisting, so much so that you expect her to be tasered at any moment. You can hear the lead flight attendant via the PA asking people to put their cellphones away. Pretty comical in itself, props to Bill for staying on task.
In a statement Wednesday, Southwest said it was sorry for how the situation was handled.
"We are disheartened by the way this situation unfolded and the customer's removal by local law enforcement officers," the airline said. "We publicly offer our apologies to this Customer for her experience and we will be contacting her directly to address her concerns."

Daulatzai deleted her Facebook content pretty quickly. Expect that libtards will be quick to point out that Daulatzai is a Muslim (aka person of color) and that the arresting officers are white.
Cedar's Take: Dog hater and a liar add to that just a generally nasty woman, Daulatzai got what she deserved. While Southwest moved quickly to hush the internet trolls by offering apologies, you can bet AFA members are cheering.
Obviously Ms. Daulatzai has embellished everything in her life. A dislike of dogs, becomes an allergy, that becomes a deadly life threatening allergy. This is the same type of person who tells your supervisor she's left you dozens of voice mails, called you six days in a row and you won't return her call, when in the real world she called twice and left no messages. People like this don't see this as lying they see this as a way of life. She is so used to lying it doesn't even register.
Someone should verify her CV, because there is a high probability she's embellished that as well.

Its time that the Federal Government get on this madness. Any failure to obey the command of a flight crew member should be a federal offense with automatic 5 years and a $10,000.00 fine. Plus, a lifetime ban from commercial aviation travel.

In the week that followed Anila Daulatzai decided to play the "race card" claiming as a "woman of color" she was targeted by the airline staff. The video says otherwise and the criminal charges speak for themselves.

Air travel is crazy enough without people like this. I hope that lock her up and toss the keys.

Why are so many of these type videos involving professors or folks with advanced degrees?

These are the folks teaching and poisoning the future of our country!!!

No one owes this woman an apology ! She's a lunatic looking for trouble...... If she was deathly allergic to the dog she would have been dead in all the time it took to remove her from the plane. Bottom line, once again, just listen to the officers and what they tell you and there will be no problem ! So sick of these idiots......