From the Mecklenburg County Sheriffs Office, crack heads among us.
Two photos one year apart show the dramatic change in this now 25 year old's appearance. The toll of drug use is unmistakable. 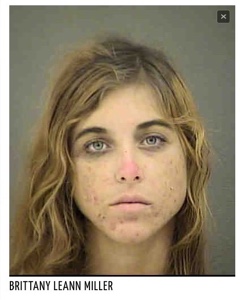 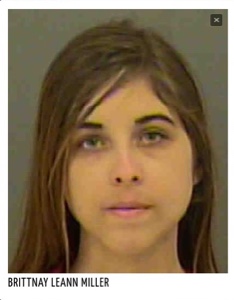 Milłer at 4' 11" and 100 pounds has been stopped by police more times in the last two years than most people. But her story is not uncommon in Charlotte, a city that is experiencing a wave of heroin and opioid related over doses and deaths.
It often doesn't make the news, most parents confronted with the obvious signs of heroin addiction make excuses for their daughter "she's just going through a rough patch" or "she'll grow out of it".
The truth is they can't, when they reach this point they are in a flat spin, a death spiral that always ends the same way.
Posted by Cedar Posts at 7:19 PM

Show your face Cedar. You P.O.S.

I hope the poor girl gets some help. Serious case of meth or heroin addiction.

I did a state wide search she's wanted in Pickens County for dealing and has priors in Rock Hill for drugs and prostitution.

It seems unkind and an invasion to pile on someone who is obviously sick and suffering to post their photo and name. If you want to make a point about the trouble so many people are in and the damage this causes, please remove her name (not necessary) and blur out the features that would make her identifiable. Yes, I know it is publicly available. But to single out this one person for (allegedly) having this problem isn't right. And if you are correct, you are likely to cause her so much distress to drive her to do more harmful things. People need the right kind of support to change their lives. Please take this down. Please choose another way to try to make your point.

Allegedly?!! Are you fucking serious... this isn't a courtroom and any idiot can see that this once attractive female has an obvious addiction. Cedar I see nothing wrong with posting her name and mugshot because as the genius above me mentioned it's public information

Gee, thanks for calling me a genius. Your high level of intellect shines through in your comments so I feel honored by your acknowledgment.

Of course it's public information, as I pointed out. It's sad that you are thrown into a foul cursing tirade by reading that I was responsible in saying "allegedly" for unproven allegations--even though probably true. Does "innocent until proven guilty" mean anything to you, along with first amendment rights?

My point was that just because something is permitted by law and constitution doesn't mean you should do it. That was clear. It was a request. And there's a better way to make this important point than in this way, in my opinion, which would be helpful instead of potentially very harmful to this one person. You don't have to agree but it would be great if you could express yourself in a mature way. You don't have to, though, because this is America and you have the right to be a ranting, cursing, inconsiderate jerk in most places without consequence to anyone except you, your family, and anyone around you who is subjected to it.

I just asked to consider some kindness for this woman. Maybe focus on people shooting, stabbing, raping, victimizing others. And hurricanes, floods, earthquakes, racist violence, any violence, terrorist regimes, ...

Kindness would be a judge who gave her an active sentence and a treatment program. She's a thief, a hooker and a crack head. Wake up Charlotte these people are not beyond killing to get their fix.

I wish Mecklenburg County judges would give active sentences for people who actually do murder somebody first, followed by people who try to murder somebody and then threatened to murder somebody, followed by a list of people who are dealing in these dangerous drugs and soliciting prostitutes. Unfortunately here there is rarely a sentence or any justice given by most of the judges sitting here. I don't disagree that crimes should be prosecuted and punished. I hope that in the end crimes associated with addictions would also involve active addiction treatment at the end or in conjunction with confinement.
I also don't understand singling out one person, citing their name, and trying to humiliate them in this way. If your purpose is to say drugs are harmful look at a photo of the visible signs then why not show every mugshot for every person who has been arrested more than once over time for crimes involving drugs? What did this woman do to deserve to be featured? Did it involve cedar or a friend of Cedar's or is this a random choice? Why not show the person she was allegedly engaged in prostitution with? Or was that person even arrested? Do you think it's some poor hapless man he doesn't know he's committing a crime also? Why don't you post all the pictures of every man has been arrested for trying to buy a human being, high or not? That may have an effect on the level of crime in the area. Also if the city, the police department, and news people would stop accepting murders with statements that it "was not a random act," the drug and murder rate might go down also. To paraphrase what you said where do you think those people will come and what will they do to take your money also? Just because a drug deal goes bad and a drug dealer kills another drug dealer doesn't mean that crime won't spill over to you. By the way it doesn't mean their lives weren't important also just because they went the wrong way at some point. I want violence segregated also but remember that at some point, almost all will eventually be walking around Among Us so without compassion and change, their problems will be yours whether you want to help or not and whether you care about the quality of their lives or not it will affect yours. The better, easier, less expensive, long-term option is to work on it early.