Kyle Maraghy the punk who sucker punched an elderly Panthers fan during last Thursday's game now has a court date.

November 30 in court room 1130. It should be fun as Maraghy's lawyer some slim ball that his father apparently hired, claims that Maraghy was being taunted. Maraghy, rumor has it told cops the "old guys" where harassing and threatening his girl friend.
You can imagine that Leigh Nasri will not be pleased to hear she's on the witness list. 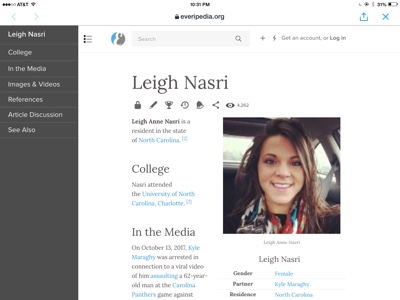 Meanwhile Maraghy will soon receive a letter from the Panthers congratulating him and girl friend Nasri on earning a lifetime ban from the stadium.
Expect both to be named in a civil suit by the victim in 3,2,1......
Cedar's Take: There's no excuse for physical violence, the old guy just wanted to watch the game and Maraghy and Nasri are two poor excuses for biological matter that calls themselves human beings.
But the question remains why didn't the victim move? By the 3 quarter most of the sober Panthers fans have gone home plenty of seats down in the lower section. The world is full of douche bags like Kyle Maraghy and Leigh Nasri its best just to avoid them.
If you find yourself in seats behind or next to a Kyle just see an usher ask to be moved. Forget the idea of asking them to say something to the drunk fan, since that just makes matters worse. If the usher won't find you another seat ask for a supervisor.
As for the victim - shoot me an email if the Panthers wont make it up to you by giving you a couple of club seats for the next game let me know I'll be happy to give you mine.
As for Kyle - twitter said it best: "lets get together sometime, my heavy bag needs a break anyways".
Posted by Cedar Posts at 10:17 AM

What a total POS and Kyle Maraghy isn't much better.

Stopped going to Panthers games for just those reasons Cedar. Drunks and low life people, non panthers fans mainly Yankees who are beyond rude and just a hassle going to and from the stadium.

Not sure what the deal is but the price is the deal killer.

If the Panthers don't come out and publicly apologize to this old man they are crazy. Its not all about winning games, if the fans are going to be fearful of going to a stadium filled with thugs and surrounded with protestors ticket sales will plummet.

He kept calling the guy a racial slur the old fuck had it coming.

I demand that you remove my photo now or you will hear from my lawyer! I'm serious I had nothing to do with Kyle hitting that old man. That is his business and I want no part of it! REMOVE ME NOW!

4:33 pm He did remove you. I do not see a picture of anyone labeled anonymous.

If Kyle had only punched the 62 year old once and stayed (did not run off with his girlfriend) and apologized to the victim he might have not been charged. If he was charged he may not have been convicted (although his prior convictions make that harder). That said, no matter what words were exchanged, Kyle had no right to lay a finger on the victim, not even once.

The 2nd, 3rd and 4th punches are completely indefensible. The 2nd punch gashed the victim's face. The victim's skin broke open and blood gushed out. That 62 year old will probably have a scar on his face the rest of his life. If the victim wants to get scar revision he will have to wait at least one year until the scar matures.

His girlfriend appeared to be an instigator in this. One day she may say or do something that Kyle does not like and he might beat the pulp out of her. If she has any common sense she should leave him ASAP.

It looks like Kyle has a misdemeanor larceny conviction for stealing from Wal-Mart and a felony conviction for LSD possession. He also has motor vehicle citations for expired tags, reckless driving, driving impaired and driving uninsured.

The assault video will live on the Internet for the rest of his life. His convictions are only a Google search way. One cannot underestimate the hugh price he will pay the rest of his life, both socially and financially, for his irresponsible and vicious behavior.

used 3 grommets along each side, and use mini bungees to hold the cover to the frame. If it gets really cold, I use a 100 watt light bulb in a spun metal fixture as a heater.privacy fence installation cost