With what has now become a likely permanent exit Jourdan Rodrigue has been missing in action for two weeks. Rodrigue went into hiding soon after a couple of her racist tweets surfaced during the fallout from her run in with Panthers Quarterback Cam Newton.

Jourdan who isn't one to shy away from caustic tweets as noted below, was called out when her racist tweets from a couple years ago were dug up and posted to social media. 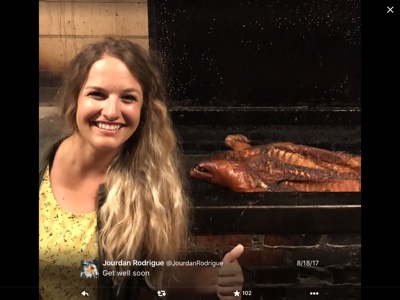 Apparently Charlotte Observer expected the fire storm to blow over, but tweets calling for her resignation have continued nonstop for the last two weeks.

Cedar Update: Rodrigue is now reported to be on an indefinite personal leave from the paper.
Cedar's Take: I'm not sure how you recover from this sort of thing. On one hand its grossly unfair, Rodrigue isn't a racist, on the other she is an idiot for being in a very public position and not knowing this would come back to bite her in the ass. She's also an idiot for going after Cam and making something out of nothing. Finally as the above tweet shows she does have a rather caustic sense of humor.