Can you imagine spawning this piece of urban trash? 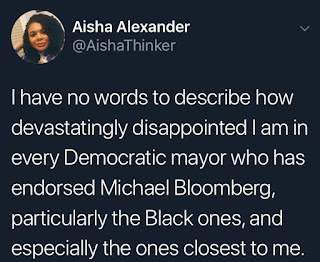 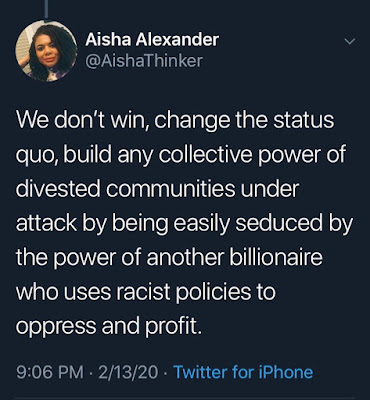 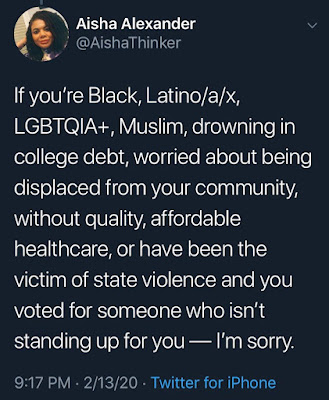 Oh but she's not done publicly talking down to her mother. 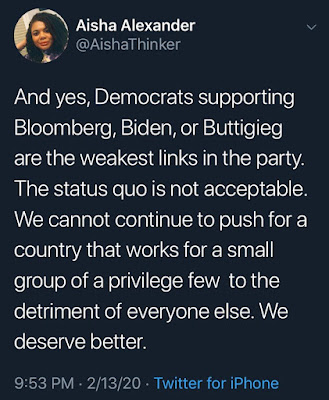 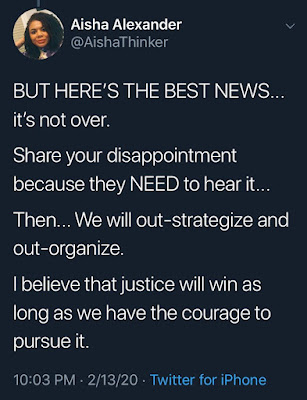 Sadly Aisha is one of those nut cases who are so focused on skin color that they can't think straight. To Aisha everything is about your blackness and apparently her mother isn't black enough. 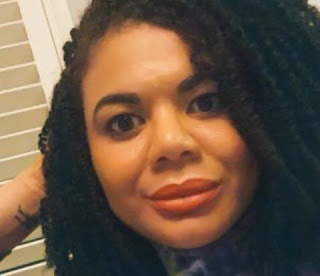 This is more than family dysfunction and a mother daughter love hate relationship. It is a generational total lack of respect for the office of mayor and parents as well as the absence of intelligence. Aisha Alexander is void of understanding of her mother's role, and is stunningly ignorant of complex issues and of the reality the plight of the democratic party.

Sanders is unelectable, this country is on an economic rocket ship, this city is as well. The truth is in Charlotte if you aren't making it now you never will and that's the case everywhere else in this nation. As long as the economy is rolling along this country is not about to give socialism a try. Therefore Sanders and Warren for that matter are unelectable.

Bloomberg is the more realistic choice. The trouble is people like the rabid seething Aisha Alexander are not about to smarten up, they will reject a Bloomberg nomination and will refuse to go to the polls on November 3rd. Which will thereby assure Trump a stunning victory and a Republican sweep in state and local races as well.

And on November 4th as the democratic party implodes you will be able to thank Aisha Alexander the daughter of Charlotte's first elected female African American mayor for her role in assuring Donald J. Trump of a second term.

Isn't she charming? These dikes are all the same hate filled repulsive pigs of woman like LaWanna Mayfield and Aisha Alexander that scream about racist police and demand tranny bathrooms. This doesn't not surprise me that she would treat her mother like this.

Who was it that busted her something like .24 a couple of years ago Huntersville or Cornelius PD?

That's the Mayor's daughter? Dang ugly inside and out.

Must be fun during the holidays

This is some kind of millennial gen-x thing. Like its cool to be estranged from your parents and to call them out whenever you can. The more public the humiliation the better. Just like Harry and Meghan its like some kind of fucked badge of honor.

Don't be too hard on the mayor she's as out of touch as her step daughter.

At 12:59 Woah don't put Gen X in with the milenials you boomer. Milenials are your kids.

Anyway what other old white person should the Mayor put in for miss genius daughter? Because the DNC ran off all non white non old fart candidates. I mean really young lady? You mean Bernie I've been in government 30+years and fled to very white Vermont from NYC. Oh I am sure he is down with your plight?
Idiots among us.

She's waiting for the reparations check that Obama promised her.

Cedar I think it is totally not cool of you to post those tweets. I realize you despise and detest our mayor but it is really low to use her own personal heartbreak to drive page clicks. I hope you can sleep at night. Prayers for Mayor Lyles and her family.

6:46 is the sarcasm master!! (If this wasn’t sarcasm public scrutiny is part of public office, McFadden is one who should learn this)

Can’t wait for Trump to deny the “Mayor’s” handshake at the RNC. How does a Democratic dominated city allow the Republic National Convention? Answer: $$$$$ #phonies. Hopefully Trump relocates last minute. That would be Epic!

10:03 Hate Trump if you must but you really need to tone it down. RNC will generate millions of revenue and put money in the pockets of much of Charlotte. You want to keep pushing the hate Trump message fine but it won't stop the RNC and any violence in Charlotte will just help insure his reelection.

Don't worry Vi Lyles will be a no show but the RNC isn't going to relocate.

Just remember if white people are involved she won't come. If it doesn't benefit people of color she's a no show. You ever see her at a CMPD vs CFD Hockey Game? How about Wells Fargo Championship? Not so much as a welcome letter in the spectator guide. Coca Cola 600? Even Knights Baseball. She's as racist as her daughter.

Just another millennial socialist who doesn't understand why everyone can't have everything they want for nothin'. She's probably just fresh off of a Sanders rally and feeling the Bern!! Personally, I hope Sanders gets the nomination...it will be awesomeness!!

To all of the libtards that live in subsidized housing, Noda, uptown, Elizabeth, and recently Cherry area...you voted Lyles into office. So suck on the tit of your leader and all of her baggage. Conservatives in Charlotte need to get off your asses and vote in your local elections and not worry so much about national politics. It starts locally because that is what affects YOU.

CP is dead on, the Democratic party is going to implode.

Hyper partisanship politics will cost this city and this nation. The democrats have accomplished nothing during the last 3 years, all they have tried to do is get Trump out of office. Can you imagine running for congress on a "I impeached Trump" platform? Everyone knew the Senate would acquit Trump what an utter waste of time and taxpayer money.

Time to face reality. Charlotte will never elect another Republician Mayor. Demographics do allow allow it. Knowing you will never get another conservative, she is pretty good. She is far better than the last mayor—Jennifer Roberts. How about Patrick Cannon?. Would you rather have Sheriff McFadden as Mayor? How about LaWanna Mayfield?, How about Patrick Cannon? Knowing what our alternatives are, she is a pretty good choice. She is 50 times more liberal than me but she is 1000 times better than the alternatives who will line up to replace her.

You racist motherfuckers are just jealous that Vi Lyles has a better body than most of your wives. I'd fuck Vi before I'd fuck Airington, Stukey, Dixon, or Patterson.


Slick Rick that dick from Hick.

Face it Mayor of Charlotte is an honorary position a figure head. And Vi Lyles is the worst this city has ever had, so I completely understand her daughter's anger and hate towards her estranged parent.

4:37... sounds like sour grapes.. Did you screw up and IA nailed you? None of the IA Sgt's are dumb, they do the command staff's bidding. We all know the shit rolls down hill. If its between YOU and their jobs, guess what they'll choose. Just your tough luck.

The world is about to get real for the Bernie Bru Crowd as Team Bloomberg hits the debate stage and this sicko bitch is going to jump off a bridge come November, my condolences to Mayor do nothing.