After nearly four months CMPD Officers have located Christopher Michael Summitt and charged him with the murder of Jimmy Tilley 58 of Harrisburg, North Carolina. 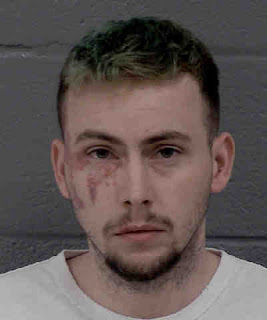 Summitt was originally identified as a suspect at the scene of a motorcycle vs pickup truck accident on October 26, 2019.

Jimmy Tilley, 58, was pronounced dead at the scene of the accident on Little Rock Road near David Avenue that happened late on a Saturday night last fall. Tilley had been riding his motorcycle when he was hit and killed by the pickup truck driven by Summitt.

As CMPD continued their investigation into the fatal crash, interviewing several witnesses and reviewing DOT traffic cameras, detectives determined there was sufficient evidence to charge Summitt with homicide, but were unbale to locate him.

Over the past few weeks CMPD's Violent Criminal Apprehension Team (VCAT) worked with deputies from the Cleveland County Sheriff's Office to locate Summitt.

On Wednesday, CMPD’s VCAT Officers traveled to Cleveland arrested Summitt without incident. Summitt was interviewed by CMPD detectives and at the conclusion of the interview, he was transferred to the custody of the Mecklenburg County Sheriff’s Office and charged.

Summit will have his first court appearance this afternoon and is expected to be held without bail for at least for the near term.

Tilley was reportedly well liked and an avid motorcyclist, as well as husband, father and good friend to all he met and a long time member of the Pub Runners Motorcycle Club.

I'm not surprised this road raging POS ran. What a freaking dumbass.

So was this a hit on a gang member?


Who in Homicide gets arrest warrants based on this WEAK evidence? This is outrageous and shoddy work. 5 months of this mans life gone that it was so blatant from the get go he didn’t do it! Lazy and outright shameful detective work.

He wasn't a gang member just a guy who loved to ride. RIP Jimmy

6:03 a big part of all of those charges is the pressure from the top down. People who have no clue on how to run an investigation ordering detectives to go get warrants or go back to patrol, much the same way Scharf does in robbery. So instead of having some backbone and integrity, they get the warrants. Then they try to convince the feds they should take this case so they don't have to worry about it anymore all the while knowing they screwed up the interview and there was no PC to begin with.

Was the Homicide Detective..Sinnott? Sounds like they ruined that guy's life over some shotty work. Is IA done with the Easter cover up yet? Who is riding the train on that fiasco?

Anyone who actually works for CMPD and is just now realizing that the brass doesn't give a shit about actual police work needs to get their heads out of their asses. Since the day RoMo showed up, police work has gone to shit. Our patrol guys are glorified report monkeys doing the same shit NEPS does and their sergeants are just cry babies who are always mad that they can't get detectives to investigate every single felony crime that occurs during their shift to keep them from having to make a fucking decision. It's one giant buck passing contest.

Given the level of stupidity around here I don't blame any detective for taking out charges to close a case, even if the PC is weak as fuck. Do what you gotta do to get to retirement. We've got deputy chiefs who have committed crimes and violated multiple policies and still got promoted and those same dip shits lecture officers and talk to the news about how we have to hold ourselves to a higher standard.

Four more years of taking 50's and bullshit larceny reports and I'm out of this bitch. I've got it better than a lot of folks and I'm terrified of what it will look like by the time I put in my papers.