From the local news:

Charlotte-Mecklenburg Police announced the arrest of two individuals in the homicides of two transgender men who were shot to death in hotel rooms less than two weeks apart. 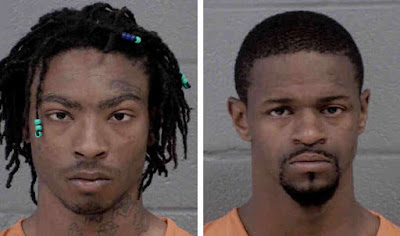 Officers say no other individuals are believed to have been involved, and have not yet said if this is a hate crime.

The first homicide happened at the Quality Inn off Queen City Drive on April 4. The woman in this case was identified as 29-year-old Jaida Peterson.

The second was reported April 15 at the Sleep Inn on North Tryon Street. Police identified the woman as 28-year-old Remy Fennell.

Both victims were identified as sex workers.

“This is a pandemic in our community. This trans individuals are somebody’s children, grandchild. We should care that they’re being wiped out,” said Jermaine Nakia Lee, program director for State of Emergency.

“Certainly not taking it lightly, the first priority in our minds is to get the word out and ensure everybody in the community, in particular trans women, are staying vigilant and hyper aware and safe tonight and the nights to come,” added Matt Comer, communications director for Charlotte Pride.

According to the Human Rights Campaign, in 2020, the majority of transgender or gender non-conforming deaths were Black and LatinX transgender women.

The lack of acceptance and little to no job opportunities makes them vulnerable, says Jermaine Nakia Lee.

Sex work is often the next choice.

“People have to eat, people have to make a living. Sex work is illegal in North Carolina, but it is a way of life for people who can’t find a solid position in society,” said Jermaine Nakia Lee.

As police continue their investigations, there is hope society can turn to one of acceptance.

Anyone with information are urged to come forward and can call 704-432-TIPS and speak directly to a Homicide Unit detective, or leave information anonymously at 704-334-1600 or charlottecrimestoppers.com.

Officers are encouraging sex workers, and especially those in the LGBTQ community, to continue to be careful.

“You gotta know who it is that you’re engaging with, especially now,” said Tufano. “This is a very vulnerable time until this person, or people, are brought in apprehended.
Cedar's Take:
The alarmist crowd quickly ran to the hate crime flags offered by CMPD. "White Supremist Racist Transphobic Killer on the loose" might as well had been the led in the Charlotte Observer.
The reality may be that Rob Tufano's presser was nothing more that an elaborate show to draw the killers out. With wide coverage looking for suspected racists, the two killers who not surprisingly are black, apparently felt safe enough to return to the streets.
No doubt CMPD detectives knew exactly who they were looking for, and the serial killer angle was just the right spin to flush a couple of total dim bulbs out of their holes.
But why a couple of Trany freaks from Charlotte? Maybe just easy prey known to have cash.
Maybe they figured they would not be missed.
And what about CMPD's sudden over the top tolerance of prostitution? Err "sex-work" never mind that crime, drugs and sex work bring on crime.
Welcome to Woke Charloot!
Posted by Cedar Posts at 2:07 PM

Honestly I never seen CMPD act so quickly and swiftly on a homicide. They light a fire up under Rob Tufano they way he scrambled to warn the media and others from the LBGTQ community. It’s interesting the community/media is providing a safe haven for these illegal activities around Charlotte. Yes it’s sad two people lost their lives but the community should not support illegal prostitution like it doesn’t bring on other typesetting illegal activities. Next subject.... I believe CMPD should reintroduce the Pledge Fund but not as a weekly deduction; once a retiree is eligible automatic $35 from every pledge members payroll should be deducted. That way a Pledge fund member can walk away with atleast 5k-7k..better than nothing and no more pools of money missing; Similar to CFD FUND. PWorld for City Council !

Sure is interesting that the time line is pretty damn obvious they knew who they were looking for and where to find them. The worst part is the man power it took to clear two tranny homo sides.

Seriously can't the cross-eyed one claim he aimed his gun at someone else?

If 'sex work' is non-enforced, can I make an offer on the Capri and start to bring back the old days of street walking on Wilkinson?

Hey Cedar I thought you said you were not about to touch the tranny story?