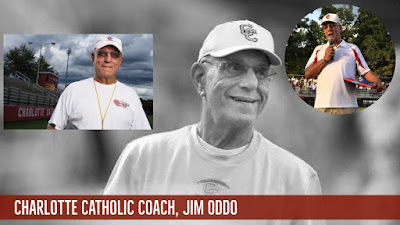 Jim and his wife were my parents neighbors. Always friendly, he lived across from Mom and Dad. And he was as you might expect always in Coach mode.
Jim was a big guy, with a firm handshake. I can't remember a time when he didn't ask about me, Mrs. Cedar, our dogs or our kids. He'd ask about my parents if he hadn't seem them in a few days. He was just like that.
Wednesday I was with my mother helping her run errands when she got the news in a text message. "SHIT" was her reaction. Funny how old people lose their filter.
The following from the local paper, but just so y'all know Jim was as genuine off the field as he was on. A good man who will be missed by all.
Oddo started at Catholic in 1973 and won 358 games. He retired in 2014 after 14 consecutive winning seasons and four trips in a row to the N.C. Western Regional championship game.
In his final four seasons, Oddo’s teams were 52-7.
For his 41-year career, Catholic made 30 state playoff appearances and reached the state championship game six times, winning the title in 1977, 2004, 2005.
That’s an icon of Charlotte high school coaching,” said former Charlotte Latin football coach Larry McNulty, 74.
McNulty retired after the 2017-18 school year.
“Jim and I had a great relationship,” McNulty said. “I really respected the way he coached his kids. And I respected the toughness his teams always displayed. His kids were always very physical and that’s who we wanted to pattern ourselves after. We had some great games, and I always enjoyed him. He was a lot of fun. Win, lose or draw, he was a gentleman after every game. We got along great.”
Oddo’s parents, Giuseppe and Josephine, emigrated to the United States from Italy and settled in Wilmington, Delaware, where Oddo became an all-state center in the 1950s.
Oddo later became an All-ACC center during his junior and senior years at N.C. State. He was part of the 1957 Wolfpack ACC championship team and was later selected to the Blue-Gray All-Star game.
After college, Oddo coached high school football in Florida but eventually settled at Charlotte Catholic, where he coached until he was 77.
“He was a good man,” said current Catholic coach Mike Brodowicz, who worked under Oddo before taking his current position. “He is Charlotte Catholic football. He built this program, and I just tried to emulate what he has built and I have always joked with you that I didn’t want to mess this up. We still run his offense and coach the exact same way he instilled in all of us.”
Catholic, which has won three straight N.C. 3A state titles, does not play a game this week, but will play twice next week: at Cuthbertson on Monday and then Friday at home against Marvin Ridge.
Brodowicz said the school will add a helmet sticker to honor Oddo.
Catholic athletic director and assistant football coach Kevin Christmas said the school would plan some type of memorial to honor Oddo, perhaps during next week’s home game, which will be played on the field named for Oddo nine years ago.
“We all owe him so much,” Christmas said. “Seeing the interactions he had with coaches and with families and with players, that just molded me. It has made me the coach that I am. And he was the most humble man that I’ve ever been around. If you ever listened to his press conferences, it was never about him, it was always about the team, and how everybody else did it.
“He was special. He was one of a kind.”
Funeral information was not yet available.
Oddo is survived by his wife Lorraine, along with his five children and a host of grandchildren.
Posted by Cedar Posts at 6:27 AM

A Good Man indeed Cedar, Glad you had a chance to know him.

Thanks for posting this. Coach was the best always positive and always God driven.

I'm shocked to read this coach was always there when I attended CCHS I swear he was there 24/7 one of those things you take for granted just sort of figured he'd always be coach. In a way he will always be standing there on the sideline.

The man could have been a college coach or even the NFL but chose to give his live to high school kids. Blessed really Blessed.