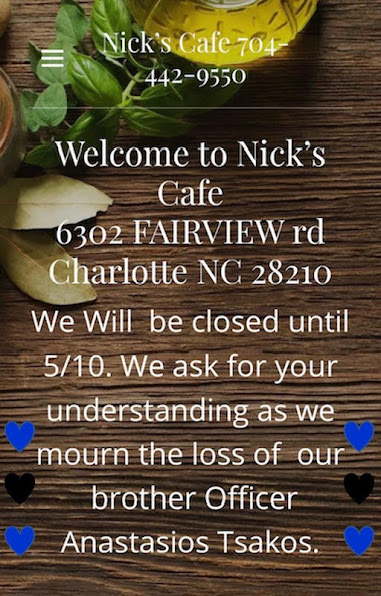 Within Charlotte's Business Community there are dozens who conduct business in quiet corners, in booths far away from prying eyes and attentive ears. Early breakfast. late lunch or coffee, Nick's is one such place. a quiet corner in SouthPark. Over the year's I've sat across from names like Harris, McColl, Crutchfield and Belk.

But Nick's will now be known for another name, Officer Anatasios Tsakos.

Yesteday CP was surprised to learn that the NYPD Officer killed last week was family. Everyone who has ever dinned at Nick's is family and so the lost of Officer Tsakos. Hits hard.

Rest Easy Brother, We Have The Watch.

The Tunnels to Towers Foundation announced that they would be paying off the mortgage of the home that Officer Tsakos only moved into 18 months ago.

"Tunnel to Towers Foundation, the nonprofit created in honor of fallen 9/11 firefighter Stephen Siller, is helping the family of a fallen NYPD officer by paying off their mortgage.

Too many brothers and sisters are getting killed in wake of recent events in our country!