Just before 5 p.m. 911 calls came in and Pineville Police immediately asked for help, fearing an active shooter situation at Carolina Place Mall.
LE saturation along with Fire and Medic converged on the Mall from all directions with at least 30 units on scene. 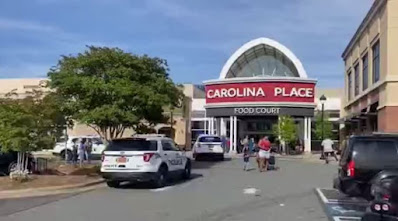 Pineville Police said two suspects were shot after they started shooting at each other inside Carolina Place Mall Saturday afternoon.

According to police, the two men ended up shooting only each other inside the "gun free zone".
Reports say that an altercation between two groups escalated inside the "Food Court" area of the mall.

“This was not random at all. This was a group of people that had a dispute that caused this. It’s not like an active shooter or random event,” Pineville Police Chief Michael Hudgins said.

Authorities said one man was taken to a local hospital in an ambulance, and the other took himself to the hospital which is conveniently located across the street. Police said both their injuries are non-life-threatening.

No one else was hurt in the shootout.

From a local television station report: 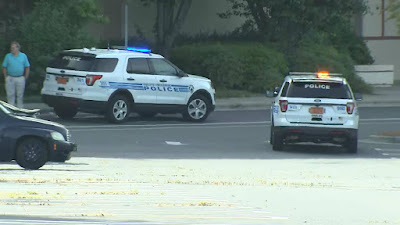 Daryl Sowell and his wife, Tonya Sowell, were in the mall when the gunfire erupted, and they fled to safety.

“We were passing by the kids’ Foot Locker on the second floor. I heard about, I think, it was five shots,” Daryl said.

“Five shots rang out. People started running. The lady at Aerie yelled, ‘Come in; come in,’ so I ran that way,” Tonya added.

Police said no arrests have been made, but they are not looking for any additional suspects.

“It’s very tough ‘cause, frankly, I’m sick of it all, shooting every week. I don’t know what the solution is, but somebody needs to do something,” Tonya said.

The anguish was hardest on parents who got separated from their children.

“I am only 10 years old, and I went through my first shooting. And if I never found my mom, I don’t know where I would be,” Jeter said. “Today, I thought I was gonna lose my life and didn’t know what was going on, so I just want everybody to stay safe.”

Authorities said the mall was evacuated.

Charlotte-Mecklenburg police said they are assisting Pineville police with the shooting investigation.

No other details have been released at this point.
Update:
Pineville Police have charged 32 year old Kevion Donshare Harris and 24 year old Jamie G'Avantay Williams with possession of a firearm by a felon and assault with a deadly weapon with intent to kill or inflict serious injury. 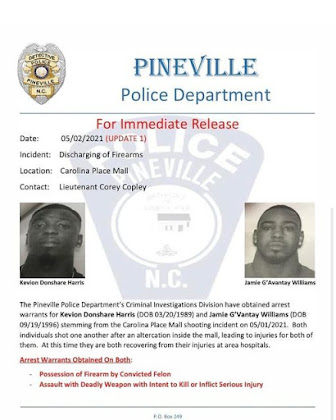 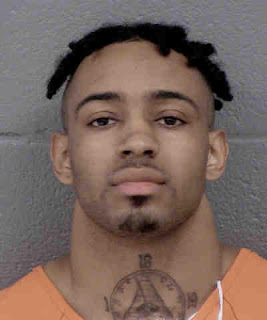 Harris remains hospitalized but in good condition and will be transported to the Mecklenburg County Jail as soon as doctors sign off on his discharge paperwork.
Cedar's Take:
Carolina Place Mall ranks just behind the infamous "North Lake Mall" for the number of police "calls for service" in Mecklenburg County. The small Pineville Police Department spends much of its annual budget dealing with crime at the mall.  CMPD responds to a large percentage of those calls as well.
The mall is owned by Brookfield Property Group and is affiliated with Brookfield Property Partners.  (There's a troubling back story there as well as the publicly traded company goes private mall by mall).
Sadly the "Mall Concept" is dying, and slowly the area has begun to trend towards becoming a blight and crime infested cesspool of African American life.  The demographics have surprisingly shifted in the last decade.  Once the domain of the prosperous white middle class the malls like Carolina Place have shifted to "Black America" as the white middle class looks elsewhere for their shopping needs.
Eastland Mall met the same fate years ago the only difference is Charlotte GovCo had the pockets deep enough to write the check. Pineville won't have those resources.
It seems odd that people refer to Carolina Place and North Lake as "Black Malls" and that in a "woke" society that such a concept is even possible.
But the truth is much of "White America" shows little interest in these places with crime not color being the biggest concern. This well publicized shooting just sealed the fate of Carolina Place.
Perhaps its actually ok in a society that has "Traditionally Black Colleges" and a "Black National Anthem" and "Black Chamber of Commence" and International Association of Black Professional Firefighters.
When was the last time you went to Carolina Place Mall? It is of course a "gun free zone" so it must be safe? Yeah right so how's that working out for everyone?
Posted by Cedar Posts at 7:21 AM

Kevion Donshare Harris & Jamie G’Vantay Williams... it’s funny but pretend your blind. Like literally can’t see... then imagine you heard the names of the suspects being read aloud on the news. Would you think it was evil white cops that perpetrated this nonsense? perhaps the problems aren’t with guns, white people, white privilege, police or even Trump supporters. Maybe... just maybe we could have some accountability within the BLACK community. It’s not racist if it’s true

Stupid Coons can't control themselves ever! Sure is a shame, they could have been a 2/4/1 and everyone would come out a winner. We can always hope for complications.

Wow! Racist much Cedar? How many sheets will I find in your closet?

So is it safe for my wife Ethel and me to go get our miles in walking this morning? It's a little muggy to be walking around the parking lot of the assisted living center we love. If our kids had never moved down here, we would still be back home, hustling past all the nail salons. This reminds me of the Barclay Shopping center back home in Camden. If we wanted to shop, we would go to Cherry Hills, a lot like South Park here, but for ease of walking, we would use the closer mall.
I am so glad we found a place to move to that is so much like home in Philly and NJ, but with better weather. Now if they would just raise your property taxes to fund midnight basketball, these young kids would have somewhere to go to release their aggressions.

8:38 as they say in Atlanta WSB "Welcome South Brother". Interesting observation comparing Cherry Hills to SouthPark and I have to agree. Looking at the crime blotter for Carolina Place you're good until about 4 o'clock on weekdays.

In fairness most the calls since 1/1/2021 are: theft from auto 39
battery 17
robbery 8
intoxicated and disruptive 11
prostitution 1
vandalism 9
fraud 15
other which would include panhandling 6

There have been only 4 shootings in the last 12 months.

Not sure it is a "black mall" yet but it is not a place where I'd take the family on a Friday night. Honestly have not been there in years and I live in Ballantyne.

The same thing will happen as it did to Eastland Mall. It will be taken over by the thugs, criminals, and lil' gangsta's!

The only solution would be to remove this mall from the bus route. The majority of the thugs who frequent this mall don't have two nickels in their pockets to rub together so they aren't there for the Belks Blockbuster sales. Just the five finger discount deals. And of course the impromptu "Self Defense" Courses.

Used to be a pretty nice mall. But no way I'd go there now. You can read the five star reviews all positive and very nice and then you begin to realize that all the reviews are by Black people. Yes the names give it away. I'm glad they enjoy their time at the mall. Then if you look closer the white people say "you can tell they are struggling". Its not just the mall but the property around the mall as well. Sad to see Charlotte go this way.

Say what you want about Sgt. Gibbs. I saw that girl beat the shit out of chick on Columbus circle back in the day. She held her own better than Koch and Vieth.

Every black girl knows how to "windmill!

Harris and Williams just tryin' to survive in a white world that holds them down. They look like two well respected entrepreneurs!

All they need is a conversation and respect for their misfortunes in life! Not their fault!

8:38, it terrifies me that you found that Charlotte is so much like Philly and NJ. We have been invaded by your type and don’t need anymore. Hell no, we do NOT want to raise our taxes fir your fuzzy headed Leftist ‘programs’.

I love this person who constantly asks about the pledge fund. Reminds me of that guy Milton from the movie Office Space: “ Excuse me. You-- I believe you have my stapler?”

Just shows you how retarded this “pledge fund” guy is. As is everyone who contributed to that fund. As much turnover as I see here at CMPD who in their right minds would think there would be money waiting for you at the end of 30 years??? JJ got braces with that money

The pledge guy is obviously one who opt'd out of the class action lawsuit.

This is what needs to be protested! Both black and white.