5 Monroe Police officers have filed a harassment complaint against a city councilwoman and mayoral candidate. 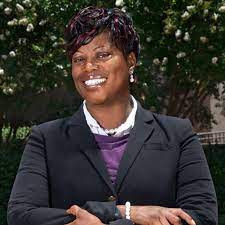 The officers claim that Councilwoman Angelia James, whose running for mayor, harassed, and even assaulted two of them during an encounter at a Monroe hotel last month.
The officers responded to a disturbance complaint at the Fairfield Inn and Suites on Williams Road on September 9th. According to the officers, while at the hotel, James created a disturbance by accusing some African American males at the hotel of being felons, and also for threatening the jobs of the officers who showed up to investigate.
Police body cam video captured the incident at the hotel. It shows James attempting to remove a badge from a Monroe Police Captain.
A judge approved the release of the body cam video. It recorded hours of footage of James at the hotel, at her home, and later at a hospital when James when to be checked out by doctors.
She was not arrested. James was censured by her fellow councilmembers. She apologized and said she was under a lot of stress.
The attorneys for the officers are asking the city to open a formal investigation into the incident or face legal action.
Posted by Cedar Posts at 6:49 AM

How many of the affirmation action folks are going to be put into positions of power? Look at our department for example. It’s obvious the lack of intelligence and work ethic makes for a substandard work performance and the agency as a whole will suffer. I’m not saying “they” and you know who I’m talking about, are bad people. I’m just saying maybe they don’t need a job with that much responsibility and power. Also I identify as black so I can say this

Well.... There goes Monroe straight to the shitter! Glad I live in the county....

Of course she hates cops, she's a "woke" black female!

C'mon, this is completely unfair. She was under stress.

I love the removing the Captain from duty, while in action, kind of lady. A real stand-up politician that we need more of these days. Maybe Mayor Vi needs to go out there and take stripes in person for those not getting the jab.

She was under "skress". Chikin' samich

Got her ass beat!