The Charlotte woman who went on a violent rampage, shooting at a Tyvola Road store owner and attempting to run over a CMPD Officer last month was finally well enough to be transferred to the Mecklenburg County Jail, last week. 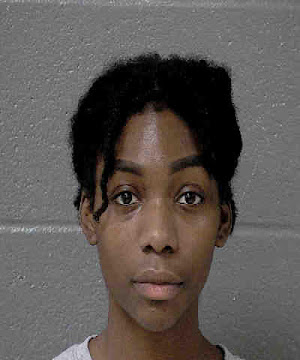 Raynique Janielle Austin Photo Courtsey of MCSO
Raynique Janielle Austin, 23 is charged with attempted murder, damage to property, hit and run, as well as flee and elude after a violent incident at the EC Beauty Supply located at 1237 Tyvola Drive.
The owner of the store said the woman, who was later identified as Austin, went ‘hysterical’ and started knocking things over after he tried to help her open a case of earrings.
The owner told Austin to leave the store. She did but not before first announcing she had a gun in her car.
“I saw she had a gun and she was trying to load it up and she shot it up in the air trying to intimidate me and so I held the door,” Ra said. “We were struggling and she was trying to get in, I was holding the door closed until we were able to lock it up.” Ra said the woman shot at the door and then tried to shoot one of his surveillance cameras.
Shortly after that, Charlotte-Mecklenburg police Officer Dustin Smith arrived on his patrol dirt bike.
Charlotte-Mecklenburg police said Austin then attempted to run the officer over with her vehicle, and he feared for his life, firing his weapon at Austin.
Austin then sped away from the crime scene, and CMPD caught up with her down the road.
Austin suffered several gunshot wounds but has recovered enough to be transferred to MCSO. Austin will have her first court appearance next Tuesday November 2, 2021.
Posted by Cedar Posts at 10:21 AM

So sad. Meck Co & NS state need to provide mental health care for everyone who needs it. These are police episodes with tragic endings that should be avoided, but there is nowhere to send these poor souls for help. We need to all be paying our share for these services.

May I suggest tax values on homes be set by actual market value? These property taxes down here are wicked low. Any time a property is sold, that needs to be the new tax value, and recalibrate the neighborhood values on that new market standard. These Wall Street fat cats and local slum lords who bought up half of Steele Creek are just stealing our monthly rents and nothing gets reinvested back in our communities.

It's not a he, it's a she! Wannabe lil' thug who got what she deserved and needs to get more!

These people are freaking animals I don't care if that's racist or not. It's a fact. Why we let them make excuses for each other is beyond me. 90% of the violent crime in Charlotte is committed by these monkeys. If they would stop just imagine what a nice wonderful city this would be. The only way for that to happen is the Black Community has to start calling crime stoppers and turn these mofo in.

The United States is “sick” in many ways, but the way I’m referring to is in the sense that it will not admit the truth no matter how much it hurts. We are living in a hyper-medicalization society where we just need a shot or pill to make us better rather than looking ourselves in the mirror and finding the true symptoms to our health conditions (physical and/or physiological). Being unhealthily overweight is now normalized as being “who you are.” We won’t prescribe a healthy diet and regular exercise because that’s too hard and takes a lot of time, dedication, and effort. Besides, it doesn’t make any money for the drug companies and if sick people don’t go to the hospital then they don’t make any money either. Just give me a shot and/or a pill. COVID poses no serious dangers to healthy children/teenagers. Despite that fact, our leaders who have twisted the United States inside out are so profoundly dishonest that they are getting ready to encourage them to take an injection that has already been proven dangerous to them rather than encourage morbidly obese people to consider the risks of their weight. You are now disqualified from getting a “health credit” on your insurance no matter how healthy you are, no matter if you don’t take any medications, no matter if you’ve never been to the hospital, if you haven’t taken an injection. You can be the most unhealthy person with as many health conditions as you want, and as long as you have the injection, you qualify for the “health credit.” This is what “healthcare” in United States has been reduced to.

In the same way we are doing something similar with race and crime. We know that the black community accounts for the majority of the crime. Some black leaders have called this out, but in large part we have resorted to blaming the “system” (police, courts, poverty, etc) instead of holding people accountable for their actions. We blame a very small percentage of negative incidents towards blacks and we blame how they were unfairly treated many decades ago to how they have become today. We won’t look ourselves in the mirror and say the truth that the black community has embraced a culture of violence and gunplay. We won’t call out the lyrics and artists that these young people are heavily influenced by. We won’t call out the broken families that destroy a kid’s childhood. And so many other things that we can’t discuss because they are “racist,” “tone deaf,” or whatever platitude you want to say for the day.


There are many other ways the United States is “sick” as well. I fear the country I love has fallen so “sick” that we will not be able to recover. I pray that I am wrong.

I believe that the main problem in the black community is that democrats keep telling them they aren't as smart or capable and everything is whiteys fault. They make bad behaviors the expected norm and keep races divided. All people will rise to the level of your expectation, so Democrats push this narrative that if you are black, you are a victim, cant do any better and need Democrat government to survive so they'll keep voting D. Its a sick mind game. Behind closed doors, this is what they do... https://www.thegatewaypundit.com/2021/10/wasnt-just-beagles-monkeys-faucis-nih-also-funded-medical-experiments-aids-orphans-ny-city/

These people are cruel and care about no one.

Would you at this? Just look at it. What the heck is that? Just get a look at that. Look at it.

Let's be honest saying all African Americans are thugs is racist. But the truth is making excuses for those that are is just as bad. The vast majority in Charlotte have not been arrested nor lead criminal lives, however those that do outnumber whitey by about 12 to 1.

Sorry but embracing thug life is the reason and not white privilege. If I was black I'd move to Asheville they are getting ready to start handing out reparations I'm not kidding. But you have to be black and a resident for at least six months.

Got my booster today. 💥💥
Suck it dickheads !!

Speaking of dickheads when they discover three or four years from now that all this kungfu juice they've been shooting you up with makes yours fall off then what are you going to do?

Not going to happen , dickhead.

So is the City still planning on suspending without pay any employee, including Fire and CMPD, who refuses the vaccine? And when is this going to happen? Seems pretty unfair considering the vaccinated employees may have to work 12 hour shifts with no days off. How does that play into CMPDs “officer wellness”? Seems that could place undue mental health strains on overworked public safety employees. What is the FOP doing for us?

Hopefully they will. Get vaxxed or adios mfers !! We need to weed the idiots out of public safety !!

She gonna get a chikin' samich!

When I get my walking papers for not getting the shot, I'm going to the Post Office. They got exemption, and I'm ready to wear shorts for my uniform.

@0621, Right on! Time to also get rid of those pesky specialist scientists with PhD’s, high-level security clearances, and expertise at the Los Alamos nuclear lab.

6:21 Hopefully you're not in public safety, but if so, how soon are you leaving?

6:21 here. … 2 years till retirement. Just tired of hearing you dumbass millennials and generation x-res. Y’all are the worst.

Well folks, I have some good news and bad news. Good news is we are finally going to start to weed the idiots out of public safety. Bad news is it will take two years before we start.

I want my chikin' samich!