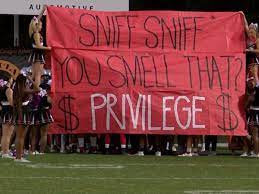 Lost on much of the media was the fact that Butler's game time banner at last week's Charlotte Catholic vs Butler High School football game was hate filled and in poor taste at best, and massively racist to many parents.

In the fallout CMS has promised to talk to those responsible. As the media pushed the story,  and outrage began to build, the Butler Cheerleaders sent a formal apology to Charlotte Catholic High School. As calls for action continued to mount CMS said those responsible will be held accountable.

But the "SNIFF SNIFF" YOU SMELL THAT $ PRIVILEGE $ banner firestorm won't die down.

Butler's problem is not just a Butler Cheerleader problem nor just an a Butler Administration problem, it extends from the top the CMS Board to Butler Principle Vincent Golden to Head Varsity Cheer Coach Kelsie Strickland.

The indoctrination of our high school students and our children has snaked its way into our schools even without a formal Critical Race Theory curriculum.

Nothing short of immediate removal of Coach Strickland and disbanding the varsity cheer squad for the remainder of the school year is acceptable.

This is no way to educate children or to help them achieve academic and life success.

I have two kids a AK they tell me the football player who carried a Blue Line flag last Friday is well liked and no one at AK objected to the flag to honor J. Herrera. But the media wants to make a race issue out of a flag to honor our guys so you now know where you stand. Ditto with school board members.

Cheer Coach at Butler isn't even a teacher WTF?

So Alec Baldwin shot 1 on a movie set with a loaded prop gun. The irony is so thick with this one.... how will this fit into the liberals dumb narrative with gun control? Proof positive that guns don't kill people..... stupid people with guns kill people. Like my man Hetrick says, "treat all guns as if they are loaded, never point a gun at something you are not willing to destroy" etc. but hey, at least we don't have any more mean tweets. Let's Go Brandon!!!!

They got away with plastering BLM all over the road in uptown. Why not pull a stunt like this?

Black Lives don't matter. Two thieves last night start arguing about who should be breaking into cars in a certain parking, both start fighting one pulls out a gun and ends the argument.

If you ask me they both needed killing. Long arrest records should have both been dead years ago. Let the purge continue!

Why they are all over tiktok and instagram and it ain't pretty seriously the team isn't called the bulldogs for nothing.

I agree that the names of the cheerleaders should be removed. What they did was despicable, but their adult mentors are mainly to blame. Going after these girls is just not right.

Treat all guns as if loaded ~ Alec Baldwin

10:29 its a comment not something Cedar put out there. Anyways these bitvches made a statement so they need to own it.

Its crazy how homicide and gang cops have linkedin profiles. If I was interrogating violent felons, I wouldn't want them pulling me up on social media and getting all my info.

I have not seen any apology! But these are the same idiots that think black motorists are unfairly targeted because they are disproportionally stopped for minor traffic violations in relation to white people.

9:03 there are plenty of black kids and other minorities at Charlotte Catholic High School. It's not just a school for rich kids.

Everyone, or mostly everyone that views this site, you're first responders, hopefully mature and professional. The girls on the Butler High cheerleading team are all aged 15-17 years of age, might be someone on the team who just turned 18. They're young. Nobody should care that their names are on TikTok or Instagram. PLEASE do the right thing and remove their names.

Blow 'em up on social media!

Little Bitches what to be heros? Let them own it. CHS is far too kind and CMS won't do squat!

I hate to root for the Giants, but it is nice to see that Panthers get pounded by another NFC East team. Who is up next after Darnold? Just wish my Eagles could play them twice a year!

That was a serious beat down. Panther's just all out dysfunctional.

Stopped watching and following Panthers/NFL last year when they went full blown woke with their special anthem and other shenanigans. Haven’t missed it one bit.