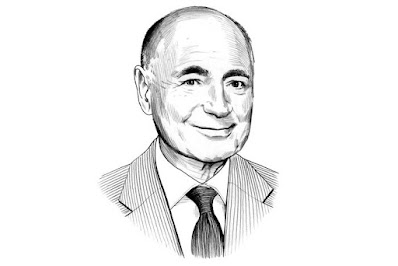 Often possessed of an impish grin, Alan Abelson—the creator, instigator, and heart and soul of the modern Barron’s magazine—was a true believer in Justice Louis Brandeis’ dictum: Sunlight is the best disinfectant; electric light, the most efficient policeman. In his witty and sardonic Up & Down Wall Street columns, Alan single-handedly transformed financial journalism into a savvy and irreverent art form, and not coincidentally, skewered scores of Wall Street vanities, corporate hucksters, and political charlatans with lightning bolts of his prose. This he did almost every week for 47 years, until his death, at 87, in 2013.

Up & Down Wall Street was an unqualified hit from its first appearance in January 1966. Alan’s deft analysis of what made stocks tick—and his stiletto dissection of hype—attracted legions of new subscribers to Barron’s. Reading his columns became a sacred Saturday-morning ritual for Barron’s subscribers. Former colleague Rhonda Brammer perhaps best described what Alan called his “scribblings” when she wrote, “Biting and brilliant, his columns mixed borscht-belt humor and Shakespearean allusions with zingers from Twain, Mencken, and Wilde—though Alan’s own one-liners often trumped them all.”

Yet Alan never used his considerable literary firepower haphazardly or merely to preen. A quintessential newsman (or, as he preferred, “ink-stained wretch”), Alan was blessed with razor-sharp journalistic instincts, congenital skepticism, a Renaissance intellect, and a preternatural felicity with the mother tongue, which sent many readers of his column to dictionaries as they read. But Alan was also gifted with a rare ability to actually listen—an ingrained empathy for others, especially the proverbial little guy, down-on-their-luck freelancers, and writers suffering deadline paralysis.

Alan’s mission in his column was quite specific, and, as Barron’s editor, he strove to inculcate it into the very fabric of the magazine—first slowly, during his tenure as managing editor, from 1965 to 1981, and then full-throttle during his dozen years of editorship. Alan not only shepherded his writers through market-shaking exposés but also wrought huge changes in Barron’s tone, contents, and look. He added art and blessed white space, while filling the “news hole” with exhaustive investigative pieces, topical financial analysis, and in-depth interviews.

Whether writing his column or directing Barron’s news coverage, Alan’s vision didn’t change. Our raison d’être was, he explained, “to provide readers with unbiased, incisive, and timely coverage and analysis of financial issues. To broaden and deepen and to provide a reality check on perceptions of investment value. To provide thoughtful perspectives that may help investors enhance the value of their portfolios or avoid situations that could prove injurious to their wealth. And, importantly, to do all that without boring our readers to death—because, on strictly practical grounds, our goal must be to increase, not to decrease their number.”

For Alan, business and economics were hardly “dry” subjects: “They are filled with conflict, often charged with excitement, and more often than you might expect, laced with humor.”

A bookish only child, Alan grew up in Queens, N.Y., and attended the borough’s renowned “Bright Boys” high school, Townsend Harris. He entered the City College of New York at 15 and emerged with a B.S. in 1946 with majors in chemistry and English. He had studied science, Alan later explained, to understand how the world works but had been bitten by the writing bug. Admitted to the University of Iowa’s prestigious creative writing program, Alan ventured west at 20—honing his literary chops alongside Flannery O’Connor.

Alan’s first real break in journalism came in 1950. Hired as a copy boy at the New York Journal-American, he was soon promoted to reporter. By 1952, Alan was the tabloid’s stock market columnist—the job came with a $5-a-week raise—and he stuck with it until joining Barron’s “for a living wage” in 1956. The magazine very much got the better of that deal. Alan was a brilliant and utterly fearless writer and editor. He unfailingly stood up for his readers’ interests, just as he also stood by his stories, and his reporters, like a veritable pit bull, even when CEOs howled and lawsuits flew. (We won them all.)

Barron’s readers are eternally in Alan’s debt, as are writers treading the path he blazed.

Kate Welling, a Barron’s staff writer for 23 years, was Alan Abelson’s second-in-command from 1981 to 1991. She is the publisher of Welling on Wall Street, an investment journal.

Cedar's Take - You might wonder why someone who posts endlessly about crime and little else would repost this piece from back in May of this year.

Truth is as you get older and you start to count the people you know who have died and you tend to miss them. I knew Alan Abelson, not personally but by his writing style and I miss him as well. We shared a lot in common. Alan was a journalist in the purest form. I chased the same dream briefly. My 26 years in the investment business means I've read his column more than 1000 times. I'm a 3rd generation investment professional by birth, and by education and training a Series 7, 63, Registered Principle and RIA. His addition to my knowledge via his Up & Down Wall Street was both timely and spot on every time.

My dad who spent 50 years in the business and has his birthday today still reads Barron's, despite the now outrageous liberal slant, was a fan of Abelson's vocabulary. I must admit I seldom read his column without at some point reaching for the dictionary.

I look around today and I sometimes feel as if I'm looking at a garden in late fall. Life is familiar but so much is gone. The tomatoes, and bell peppers, wordsmiths who could turn a phrase and journalists who could tell a story that was worth reading more than once.