Three Charged After String on Armed Robberies (The Usual Suspects)

From CMPD:
Quick work and a collaborative effort between officers in the Charlotte-Mecklenburg Police Department's Hickory Grove and Independence Divisions ended the short-lived spree of armed robberies committed by three suspects.

Around 2:40 p.m. on November 7, 2021, officers responded to reports of an armed robbery at the AutoZone located at 10020 Albemarle Road in the Hickory Grove Division. When officers arrived, they learned a suspect armed with a pistol attempted to take property belonging to the business. The suspect fled in a silver Dodge sedan before being able to take anything.
Around 20 minutes later, officers in the Hickory Grove Division responded to reports of another armed robbery at the Dollar General located at 8825 East W. T. Harris Boulevard. When they arrived, officers learned a suspect armed with a pistol took property belonging to the business and fled the scene.
As a result of the investigation, officers were able to identify the suspect vehicle as a silver Dodge Charger and shared this information with officers across the city. While monitoring the call, detectives in the CMPD's Real Time Crime Center (RTCC) coordinated with officers in the field who located the suspect vehicle and attempted to conduct a traffic stop; however, the driver refused to stop, and a vehicle pursuit ensued. The pursuit came to a conclusion near the 8400 block of Old Statesville Road as a result of damage to both passenger side wheels. All three occupants fled from the vehicle on foot, but were quickly apprehended by officers.
The three suspects were identified as Anthony Tyrik Caldwell, DOB: 12/11/1997, Tyerie Davis, DOB: 06/06/2001, and Brian Carmichael, DOB: 01/11/2000. Each suspect was interviewed by detectives, and at the conclusion of their interviews, each suspect was transferred to the custody of the Mecklenburg County Sheriff's Office and charged with one count of armed robbery, one count of attempted armed robbery, two counts of conspiracy to commit armed robbery and resist/delay/obstruct a law enforcement officer. Davis was additionally charged with second degree kidnapping and possession of a stolen firearm. Caldwell also receive an additional charge for possession of a stolen firearm.
The investigation into these cases is active and ongoing. As additional information develops, it will be released by the CMPD's Public Affairs Office. Anyone with information is asked to leave it anonymously by contacting Crime Stoppers at 704-334-1600 or http://charlottecrimestoppers.com/. For additional information about this case, please refer to the reports.
Thugs just gonna be Thugs. But the real criminals are the judges who let these vermin out of jail time and time again.
Take Tyerie Davis below: 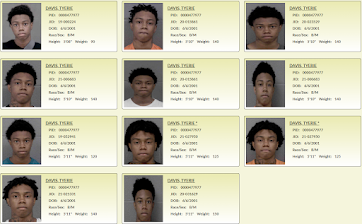 Arrested for a December 20, 2018 Armed Robbery, he was released twenty four hours later.
While waiting trial he was arrested again on August 9, 2019 and released the same day on an unsecured bond.
On March 19, 2020 he was once again arrested this time for a series of armed robberies and released again on April 5, 2020 on an unsecured bond.
A month later on May 24, 2020 he was arrested on another robbery charge and again released on an unsecured bond. Keep in mind that he was still awaiting trial on the December 20, 2018 robbery.
When Davis finally went before a judge was given three years "Probation" and a suspended sentence but served four months in the Mecklenburg County's Jail and was released on November 27, 2020.
Davis was arrested again on January 20, 2021 on Robbery with a Dangerous Weapon and surprise (NOT) released on an unsecured bond.
Six months Davis was arrested again June 23, 2021 on an assault on a female change and released four hours later this time on a secured bond of just $200.00.
The system is broken but not in the way the Woke Mob and Liberals like Charlotte Mayor Candidate Braxton Winston and US Senate Candidate Jeff Jackson think.  These defund the police liberals want Charlotte to become the next Seattle Police free fun zone.
Posted by Cedar Posts at 12:23 PM

I don't know, in a town where BoA, Wells, Ally, etc pick the pocket of every working person in America via the Federal Reserve, seeing 3 enterprising young men do it on foot means we have an education problem. We just need to give them a free education and teach them if they become banksters, they can rob and pillage completely without consequence.

And to see this in full circle, just ask who exactly is funding the liberal woke mess? Well, that would be the billions in 'fines' that Wells has chalked up, the charitable woke contributions that BoA doles out to curry favorites with the PR machine, and the teams of lobbyists that Ally employs, all to keep the rules tilted in their favor.

These 3 young men. Well, we all know they will be number 102 of 2022, number 34 of 2023, and the last one will finally break a law in SC and get prison time. But when are you going to cover the massive crimes in Charlotte? The ones that have made the dollar so worthless, the Dollar Tree is irrelevant now?

How much money does one get from a Dollar General? And if you split it 3 ways, does that even pay for a Popeye's sandwich and a large Orange drink for each?

Wouldn't you be better off robbing the dope man?

I'm willing to bet all three walk within a week and at least one takes two in the chest before Christmas. And suddenly his momma will show up do a lot of stupid yammering and the mayor will hold her hand and I'll be laughing my ass off. These dumb fuckers all dead before they reach 30. Gods way.

Check out those chikin' samiches!

how many murders have there been so far in charlotte this year?