Salvation Army is WOKE? What a horrible Mistake!

As you've likely heard by now, the Salvation Army has been losing donors by the kettle full after it was revealed that they have adopted a CRT platform and Woke agenda.
This is terribly sad news. We won't be ringing the bell this year after all.
Times change so in a way I guess its ok. But ten years ago this was my post on the Salvation Army Red Kettle Drive:
Ding, ting, ting, ding, ting, the sound echoes across the cold, wet parking lot pavement. A sound as familiar as Silent Night or Joy to the World, it’s the sound of the Salvation Army during Christmas. 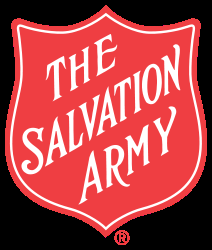 The night air is full of dampness, and the cold wind jumps around the north side of the building threatening to knock over the Salvation Army tripod and sign that supports a red bucket, known for the past 100 years as the kettle.
During the past dozen or so years this has been my place for at least one night during the weeks that lead up to Christmas.
A Christmas tradition began years ago, with an unattended kettle on another cold and rainy night. The bell ringer had walked off the job, perhaps his shift had ended and his replacement a “no show”.
Whatever the reason the sight of the bell on the sidewalk and the apron hanging on the back side of the sign was a call to action, and ever since that day my family has rung “the bell” for
the "Army". 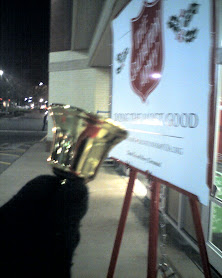 And so it goes that on this cold night, I and Mrs. Cedar are in front of a South Charlotte Wal-Mart ringing the night away.
A vast majority of bell ringers are paid by the Army to ring the bell. They work the part-time temporary job, from Thanksgiving til the 23rd of December.
For many it is the only work they can find. The hired ringers have varied styles, some that sing, some that have a little dance; many are as happy as St. Nick himself, but others act as if they are mimes and say or do nothing at all.
But we are of a different sort. We take only a few days or nights each year and spilt the work among more than a dozen family members who often ring the bell together. I suspect the boom box which plays the sound track from Vince Guaraldi’s “A Charlie Brown Christmas” endlessly puts a smile on most everyone’s face, and perhaps encourages folks to open their wallet just a little wider.
We all wear the Salvation Army "red aprons" a sign of service and some of the family wear Santa hats, red scarfs and even red sweaters.
The job is both sobering and amazing; honestly it’s a lot more fun than you would think.
In front of the local Wal-Mart this past Saturday we rang “the bell” from 10-8 providing Christmas music for all, and drinking plenty of hot chocolate and coffee to stay warm.
What amazes me most, are the people. 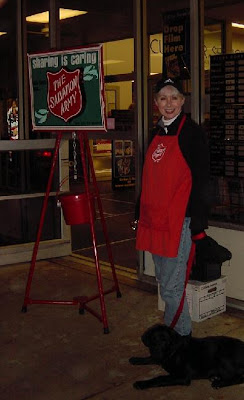 Keep in mind the Salvation Army is a Church, so we say Merry Christmas a lot, no “Happy PC Holiday” greeting from us.
By the way if you ask me, saying Merry Christmas is one of the biggest joys of the holiday season.
Salvation Army bell ringers are often the same people the Army benefits during the winter.
So people are sometimes confused when they walk by and see a couple wearing Barbour Jackets and Timberland Boots.
One year a man who attends of our church did a double take, shocked to find my father a member of the church vestry ringing a bell for the Salvation Army.
The man stood there with his mouth open and then in a surprised voice asked “What are you doing here?” My father always quick with a joke offered that he was doing community service.
The man walked away shaking his head, it took another six months to squelch the rumor that my dad had been convicted of some crime that required many hours of community service
Throughout the night, there are those who shrug, or say they are sorry that they don’t have any change.
Others walk by and won’t even look at us, and many will go out of their way to avoid using the  door closest to us. To some we ARE the homeless, they won’t make eye contact as they walk by, afraid to speak to us for fear we might begin preaching about the Birth of Christ.
Others actually take pity on us.
A light mist was falling across the parking lot, when an older women approached. She carefully placed 5 dollars in the kettle and in a heartfelt voice she tells me: I pray that things get better for you and your wife. "Bless you" I politely replied.
Often it is those who have the least, that dig down the deepest.
A single mother carefully takes a dollar out of her purse, into the kettle it goes. A bus driver waves us over and hands us two tens. I watch as a Wal-Mart stockman helps a customer load up a large LCD television into his car, the customer tips the employee with a $20.00. As the employee walks back into the store he turns to the kettle and in goes the picture of Andrew Jackson.
A woman in Parda boots and a fur coat briskly walks by, skipping the red kettle and in the process, nearly tripping over a young couple in t-shirts with five kids in tow.
Each of the children is handed a small amount of change and one by one the coins trickle into the kettle.
Later the same women with the fur coat exits the store and slides in the black Mercedes that has been idling in the fire lane for nearly twenty minutes.
Then there are the Latinos, who place money in the kettle coming and going. They simile when we say MERRY CHRISTMAS, and I wonder if they understand my English, maybe I should say Feliz Navidad?
I know they don’t have the money to spend so why do they do it? I’m cold and nearly asking the question out loud. By 8:40 the van rolls up, the young black man a full time Salvation Army employee is cheerful and friendly. He unlocks the kettle and places it in the van where six men will take the long ride back to the men's shelter for tonight.
The Salvation Army’s work goes on, but my work is done until next year.
After ringing the bell for 3 and ½ hours my feet are numb, my face cold and the bell is still ringing in my ears……. Ding, Ding, Ding…. I'm fortunate that I don't need a ride to the shelter.
Blessed that my wife and I can stop at Five Guys for a hamburger and coke, where the girl behind the counter says Merry Christmas! as we walk out the door.
Yes, Merry Christmas indeed!
Posted by Cedar Posts at 12:11 PM

Is this true? SA is denying. Sad that SA would destroy so many years of good work!

Certainly they will be able to see the severe downturn in their contributions this year, and someone will realize the folly of their way. Or will it be blamed on Covid too? Those woke warriors never seem to open to the dawn that everyone does not buy in to their guilt trip, nor does everyone need the association from every single organization up and down the ladder to have the Woke hammer and sickle agenda all over it.

Read Woke, Inc You already know this, but the depths that America is getting played is fierce. We are already slaves to the banks, the pharma companies, ag companies, two political parties who are basically one, an education system that enslaves the youth with a lifetime of debt for a worthless degree and indoctrination, and a religious bureaucracy that has been infiltrated through and through with liberals who have destroyed their mission of charity. Now every company, every non-profit, everybody, also has to buy in to this garbage?

Yeah, not dropping change in the bucket. Samaritan's Purse seems to be a good receiver of my extra charity.