A few years (2008) back I wrote a letter (below) to the Editors at the Charlotte Observer. Who does that any more?

I was annoyed and perplexed by the Yankee transplants who wear puffy jackets gloves and toboggans just because the calendar says November even if it is sunny and 65 degrees.

They dress for New Jersey November and not Charlotte were fall runs until well past Christmas.

And so It shouldn't surprise me that they run roughshod over my Southern Christmas traditions.

So Here's the letter a "re-post" hope you don't mind.

Garish and shrill are not words normally associated with our Southern Christmas.
But leave it to transplanted northerners to bring their idea of Christmas to Charlotte.

A Southern Christmas has been for nearly 200 years the highlight of social awareness and decorum. A carefully placed single red bow on a mail box, a wreath on a window, or the extreme southern extravagance a fruit laden mantle piece or front door dressing.

How odd it is to see blow-up snowmen in yard after yard in a land where snow is a rarity. 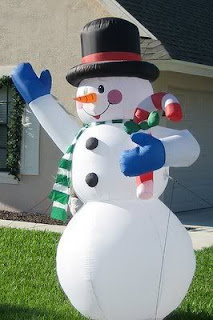 An illuminated blow up Santa and baby Jesus standing side by side, along with strings of lights that not only run the roof line but outline each and every window. Flashing, buzzing, whirling displays are suddenly aplenty.

It seems to our transplanted northern neighbors that if it doesn't look right the first time, just buy some more. My once classic southern neighborhood has become the Griswold Family Christmas card in "Da Hood".

Not one but two blow up Grinch reside within my neighborhood, they seem to sneer at my cherished southern accent along with the 11 Frosty the Snowman that abound.

One neighbor is even convinced that the poly packing meant to keep the red bow from being crushed wasn't worth the trouble of removing before attaching to his mailbox. 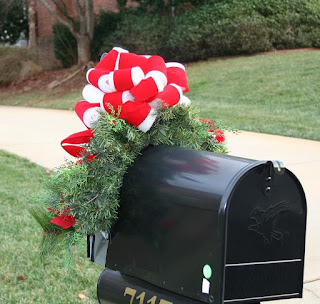 The Southern Christmas was once the product of the tough times following reconstruction. A single candle was spared, magnolia branches cut, the forest scoured for a couple of perfect pine cones and a in a good year a tree was taken, most often a good sized cedar would do.

In more recent time, a trip to Simpson's, was always in order, the best tree from the lot on Kings Drive was always a welcome event no matter how cold the day. 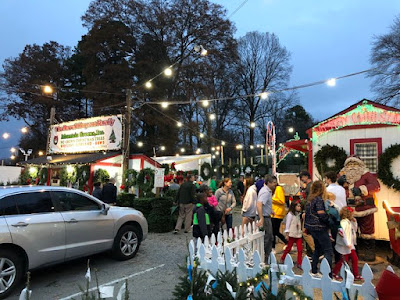 Later this year as I drive past the wonderful homes that abound in my 28277 zip code I can count on not one real Christmas tree being laid at the curbside the day after Christmas.

A Foot Note: I know I'm being a Snob, a Grinch and so on... I know the kids like the lights and that I should let people do their own thing. But I'd really like to see the stars rather than the glare from 15 Million GE Christmas Wonder Lights.

Then there was the 3 year old down the street, I'd bitched about the yard full of inflatables in years past and just saw "Dad" installing a Hello Kitty Christmas inflatable.

I had to eat my words when I drove past the second time and saw the little girl standing in the doorway her eyes wide with wonder at the amazing sight of the giant blow up Hello Kitty.

OK Lord I Give!