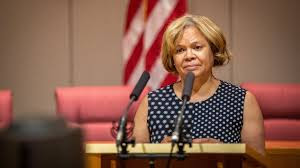 Our community of police, fire and family as well as perfect strangers came together at the First Baptist Church to say their goodbye to Charlotte-Mecklenburg Police Officer Mia Goodwin, who was killed in the line of duty on Dec. 22 while working a traffic accident on Interstate 85.
Through tears, Goodwin’s father, Antonio Figueroa, talked about the day of his daughter’s wedding and how shortly before walking her down the aisle, he told her how beautiful she looked.
Mia Goodwin had been with the CMPD since 2015. She was on her fifth day back to work from maternity leave when the crash on I-85 happened.
“There’s no magic words that takes this type of pain away, nor should there be,” CMPD Chief Johnny Jennings said during his remarks.
The chief also thanked everyone from the Charlotte community, as well as around the country, for their “overwhelming” support for the department and Goodwin’s family.
Noticeably absent was Charlotte Mayor Vi Lyles who is well known for her anti-police and pro BLM stance. The mayor did offer her support via twitter with "This is a day to honor a fallen hero who died in service to her community.
Lost on Vi Lyles that Officers like Mia Goodwin are the reason the rest of us sleep well at night.
Interesting to note that Vi Lyles will be in attendance just blocks away from the First Baptist Church on New Years Eve to lead the countdown to 2022.
Conflicting reports of Mayor Lyles absence continue. Seems plausible that the Mayor was in attendance, but kept an extremely low profile in order not to upset her BLM Defund the Police voting block.
Posted by Cedar Posts at 1:30 AM

Cedar are you surprised? Vi Lyles is a POS that has no business leading a PTA much less a city like Charlotte. Its time we have real leadership. Toss the bitch out!

Worthless...
Her presence would have just dirtied up the service anyway.

I doubt she would have received a warm reception. But lets face it she wouldn't know how to act. She'll attend the next George Floyd memorial or hold a community meeting to ban single family zoning.

Vi Lyles was with her Ho Ho Ho daughter celebrating Christmas while trying to figure out who the baby daddys are.

With her defund the police and pro BLM agenda it was a good thing she didn't show up. She might have had an accident.

Absolutely discussing and I am sure Braxton did not waddle his lazy ass over their either.

She'd have been there if the person was black or liberal!

Tariq Bokhari and Braxton Winston were standing shoulder to shoulder in the lobby of the church. Didn't see anyone else from city govt.. not a winston fan in the least. I suspect he was there because of all of his visits to firehouses across the city. he is still worthless.

Vi Lyles is such a freaking clown. Fat nasty and racist as hell, and yet they keep electing her. She has nothing vested in Charlotte she's just looking for her ticket out of town. Someone please step up and take her out like next weeks trash.

7:51-Never has anyone from City Council visited a fire station other than a ribbon cutting. There is NO need for them to appear. Mayor Pat was known to visit frequently. Braxton is just trying to campaign at fire stations and put that optic out there. He is divisive and doesn’t give a rip about public safety. I’ll give Braxton credit, he has spent more time visiting and ACTUALLY talking and LISTENING to firefighter than the current KB head (he’s NO fire chief and not worthy of the title). DC Winkles is completely in over his head and has NO business in any leadership function, he couldn’t convince a dog to sit. DC Jones was ok until he started drinking out of the Kool-aid dispenser at the G.O. DC Skeris is knowledgeable, two-faced, will use you as a rung on his ladder to the top, and he sold his soul. Campaigning has NEVER been allowed on City property, and we’ve even been warned about participating in such activities, except under the current leadership. Joke is on Braxton, the vast majority of Charlotte Firefighters don’t reside within the City Limits and can’t vote for his racist/self-serving ass anyway.

The Mayor whoever he/she is and whatever political party they belong to should have been there representing all of Charlotte, standing for every citizen to express our heartbreak and to say thank you not just to Officer Goodwin, and her family but all of our public servants.

She's as unattractive as Lori Lightfoot, as worthless as Bill de Blasio, as full tilt defund the police as Boston's Michelle Wu and as worthless as Seattle mayor Jenny Durkan. I'm glad she didn't show up because as Cedar has pointed out it just fits her corrupt ethics, unpaid property taxes, fee Myers Park Country Club membership personality. Before its over she'll be known as Patrick Cannon 2.0

The entire city council and all of the county commissioners should have attended!

They should elect Vickie Foster as the next mayor. She possesses all of the leadership skills and knowledge that the position requires!....RRRRRIIIIIGGGGHHHHHTTTTT!

Y'all be safe out there tonight. Crazy MoFos are everywhere so please don't become the last or first homicide.

You people need to cut Vi Lyles some slack you know she's been though a lot and the rehab process is pretty intense. Once she's been clean for a year or so maybe she'll start attending these public events.

Is anyone keeping score?

Best Mayor ever! Suck a Dick you racist fuckers!

As I understand it Washington gave the City $60 million under the American Rescue Plan Act the Mayor decided she's going to spend the money on her racial equity initiative which includes the $60 but is now is totaling $250 million. If you ain't black you can't apply so it is basically reparations.

Here is what I see for 2022. First up JJ hires Foster, then JJ quits. Two OIS both Black Teens are fatal, and the city goes wild. Someone then leaks the emails about the Juneteenth shooting on the Ford. Which explains why there have been no arrests. Media goes crazy. Vi Lyles drops out the Mayor's race after her tax returns are leaked. CMPD hires outside former Atlanta DC to run CMPD and head roll, more than 100 put in their retirement notice. CMPD goes negative net gain for city fiscal year again. Anyone disagree?

Hello everybody! I’m not a Lyles fan, and I was pretty disappointed to hear this info.

Just because I know we all value the truth, a source very close to the goodwin family who was with them every step of the way, including the day of the funeral…. Confirmed that Lyles was at the funeral. He shook her hand and sat beside her out of public view. She remained out of public view because she did not want to detract from Mia Goodwin and her family. So, while it is true she was not visible the day of the funeral, she was present and there supporting the family (apparently). So, while it made for a good headline, this headline is actually false.

9:30 I saw Lyles she was indeed there but otherwise invisible. She's not a fan of CMPD she is fully backing BLM and the anti white agenda. While the not wanting to "detract" from Mia Goodwin and her family is a nice thought that is total bullshit. She didn't want her supporters to see her as supporting the police. The only comments she's made publicly was to echo the words of Chief JJ or to retweet the CMPD tweeter statement.