Police, US Marshals arrest thug and hoodrat who shot a Bradley, Illinois police officer to death with her own gun last week as she pleaded for her life, according to NBC News.
Prosecutors in Kankakee County shared details of Sgt. Marlene Rittmanic’s brutal death Monday, while noting they would be seeking the death penalty for the two suspects in the shooting.
State’s Attorney Jim Rowe said he would be asking federal prosecutors to pursue the death penalty for the suspects, Darius Sullivan, 25 and Xandria Harris, 26. They have been charged with first degree murder and first degree attempted murder.
The shooting came about at about 9:56 p.m. on December 29 after Sgt. Rittmanic, 49, and her partner, Off. Tyler Bailey, 27, responded to a call at a Comfort Inn in Bradley, which is located about 60 miles south of Chicago on Dec. 29. They were responding to a call about dogs barking in an unattended vehicle in the parking lot.
Bailey identified the owner of the vehicle, Harris, whom he knew as an acquaintance of Sullivan. It was confirmed there was a room in Sullivan’s name booked in the hotel.
They were located in a room inside the hotel and the officers began speaking with them as they stood outside the door. It was learned at some point there were warrants for Sullivan for failure to appear in court. He had also previously fled from Bradley officers who tried to detain him on warrants.
At some point in time, the two suspects exited the room and shot both officers, police said in a press release. On Monday during a bond hearing, Rowe laid out what occurred at the hotel. The officers knocked on the hotel room door at around 10:13 p.m., receiving no response.
They knocked again about a minute later, and Bailey identified himself as a police officer, asking Harris to come out of the room to speak about the barking dogs, Rowe related. He said Harris allegedly responded “Yes.”
Officers knocked on the door for at least three more times, asking Harris to come out. Each time, she said she was coming. At some point, after about a 14 minute wait, Harris started to exit the room however was “squeezing” herself through a small opening, believed to be in an attempt to prevent the officers from taking Sullivan into custody.
Rittmanic and Bailey told Harris to stop blocking the doorway. He said that Sullivan came out of the hotel room armed with a 9mm handgun with a drum clip, prosecutors said according to NBC Chicago. As Harris struggled with the officers, Sullivan shot Bailey in the head, Rowe said. Sullivan then turned his attention to Rittmanic and shot her as she sought to distance herself.
Sullivan, whose gun had jammed, chased Rittmanic down the hallway and was able to pin her against a door. Sullivan attempted to unjam his gun with his right hand and mouth, Rowe said, while also trying to disarm Rittmanic with his left hand.
During the scuffle, Sullivan called out to Harris to “cock the gun, cock the gun,” Rowe said, and they were eventually able to disarm Rittmanic. The two dirtbags then stood over Rittmanic, and pointed the guns at her as she lay helpless on the floor, having already been shot once.
Rowe said the sergeant begged Sullivan not to shoot her. “Sgt Rittmanic was pleading with them to, ‘Just leave, you don’t have to do this, please just go, please don’t, please don’t,’” Rowe said. “She was desperately pleading for her life.” As Harris was holding Sullivan’s 9mm, Sullivan fired two shots from a gun believed to be Rittmanic’s, striking her in the neck area.
After the shooting, Harris gave Sullivan the keys to the car and told him, “You have to go,” whereby Sullivan fled down the hotel stairs and left in a vehicle. Harris went back to the hotel room, where she got her belongings and her two children (mother of the year, clearly) and fled,” Rowe said.
The two officers were taken to area hospitals in critical condition; Sgt. Rittmanic later died from her wounds, while Bailey was still hospitalized in critical condition on Monday, “fighting for his life,” Rowe said.
Sullivan was located by the U.S. Marshals Great Lakes Fugitive Task Force after walking out of a home in North Manchester, Indiana, located about 35 miles west of Fort Wayne. He remains in custody awaiting extradition back to Illinois. He is being held without bail. 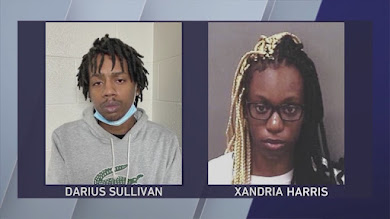 Harris turned herself in about seven hours after Sullivan’s arrest, accompanied by her attorney.
At her bond hearing, prosecutors stated that Harris “actively assisted and enabled Darius Sullivan throughout the course of the murder of Sgt. Rittmanic and [attempted] murder of officer Bailey, and she is equally responsible.
Harris was denied bail. Sullivan is charged with six counts of first-degree murder, two counts of attempted first-degree murder, and one charge of aggravated battery with a firearm.
Harris meanwhile is charged with three counts of first-degree murder and one count of attempted first-degree murder. Sullivan refused to waive extradition back to Illinois, and Rowe’s office is working to secure a governor’s warrant to get him back to Illinois to face charges. Rowe said Monday the charges filed for both include first-degree murder of a police officer and attempted first-degree murder of a police officer.
The state will proceed with charges in the Kankakee County Courthouse, and will seek life sentences for Sullivan and Harris. While Illinois eliminated the death penalty, Rowe said he was submitting a request to the U.S. Attorney for the Central District of Illinois and the U.S. Attorney General to review the case in order to lodge federal murder charges against both suspects.
Unlike Illinois, the federal government still allows death sentences. Rowe said this was being done due to legal precedent and “the nature of the offenses.” “Our State’s Attorney’s Office will now work to ensure these offenders face the harshest justice the law allows, no matter the jurisdiction, and to ensure that the full weight of the criminal justice system is brought to bear upon them and anyone who assisted them,” Rowe said.
The cases are scheduled to proceed before a grand jury later this month. Harris’ arraignment is set for Jan. 27.
Sgt. Rittmanic joined the Bradley Police Department in 2007, Fox News reported, and was promoted to sergeant in 2014, according to Lt. Philip Trudeau, a spokesman for the Bradley Police Department. She had previously spent seven years serving as a deputy with the Iroquois County Sheriff’s Department, he added. Bradley police have announced that Sgt. Rittmanic’s funeral will be on January 8, with visitation the day before.
Thousands of police and emergency services personnel are expected to attend her funeral.
On Monday, the Illinois State Police released a statement on behalf of her family and the Bradley Police Department, praising her for her work and thanking the community for an outpouring of support. “Marlene believed in people and her ability to speak to the community with respect; meet them where they are in life; try to understand their true needs; and work together to find a solution that produced the least disruption in people’s lives,” the statement read, reported ABC7 in Chicago.
“To her—the job was about making her community safe for everyone, she believed—and stated, “just because you can, doesn’t mean you should.” Sgt. Rittmanic, a dog lover, published poet, amateur photographer and film producer for family events, Bradley Police Department recruiting, and community events, was awarded Law Enforcement Officer of the Year in 2020, the statement said. “Our world has been turned upside down, obliterated, and hopelessly broken,” her family and colleagues said.
Cedar's Take:
Say what you like about bail reform, but these two shit balls should have been locked up long ago. But we have a system that gives "special" treatment to people of color.
The first time Harris refused to open the door was the warning. Perhaps the call for additional resources was made. At the 3rd attempt someone should assume things are not going to go well. Stack up and enter the premises.
Bradley is like Matthews or Pineville and they rely of "mutual aid" and each other to handle situations like this unfortunately small municipalities are not immune to Chicago's crime explosion.
Pay your attention bill Matthews, Pineville, Mint Hill, Mount Holly, Huntersville and Waxhaw. These mofos are born to die by violence don't stand in their way.
Posted by Cedar Posts at 7:05 AM

Either I'm psychic or the profile of the perps was entirely predictable.

Walter Bowers from CMPDs Freedom Division is sueing the CMPD as an acting attorney over their failure to solve a homicide case within an appropriate amount of time. This will be interesting to see if the case is settled or dismissed.

Go Walter Go! He was always such a grab bag of problems when he was with us on the streets.

Walter worked in the police attorney's office for several years. Now, he is suing them. Seems kind of sad. He must need the money bad.

Speaking of sad, our memorial to Officer Goodwin only had over 150 officers show up on a department of over 1000. C'mon guys! Not everyone was working that time.

8:40...What does he (Walters) deem to be a reasonable amount of time given his vast experience as an investigator?

They should allow her family to beat the two to death with a baseball bat!

Send the them to the Middle East where the family gets to stone you to death! Cruel and unusual, with these two nuggets, who cares! They deserve more than they will ever get!