Driver charged with 2 counts of Felony Death By Motor Vehicle in West Charlotte crash that killed 2, injured 2.
Two people are dead after a crash on Freedom Drive in west Charlotte Tuesday morning, officials confirm.
The crash happened on Freedom Drive near Alleghany Street around 5:10 a.m. Tuesday.
According to CMPD, officers located a 2004 Nissan Maxima and a 2017 Hyundai Sonata with severe damage. The drivers of both vehicles were taken to Atrium Health Carolinas Medical Center with serious injuries.
Two passengers in the Maxima, 25-year-old Onjenay Porter and 32-year-old David Coleman were pronounced dead at the scene by Medic due to injuries from the crash. 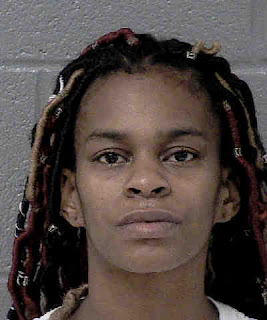 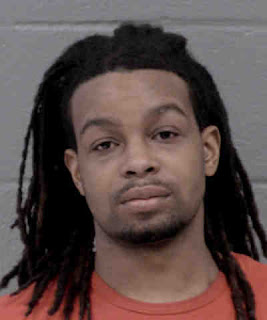 David Jamar Coleman aka Deangelo Rondrico McQueary Age 35
A DWI task force officer responded to the hospital and determined the driver of the Maxima, Kenya Harris, was impaired. 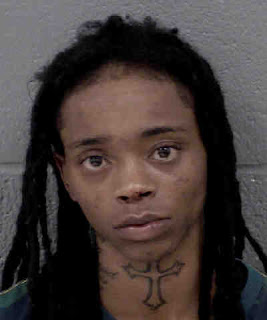 Kenya Harris Photo MCSO
Harris was charged with felony death by motor vehicle, driving while impaired, driving while license was revoked, and failure to yield of right of way.
Harris is still recovering at the hospital.
Preliminary investigation shows Harris’ Maxima was traveling west on Freedom Drive onto Pacific Street, and the driver of the Hyundai Sonata was traveling east when Harris turned directly in front of them, causing the Hyundai to collide with Harris’ car which caused Harris to run off the roadway. Nobody in Harris’ car was wearing a seatbelt. The driver of the Hyundai is also recovering at the hospital.
Investigators say speed and impairment do not seem to be a factor with the other driver, and that driver was wearing their seatbelt.

Let's just say this ain't her first rodeo. The neck tat should be good for five years, killing the two passengers in the car, in South Carolina that would be 18 years, in Charlotte their lives are worth about 18 months.
Cedar Update:
Harris was formerly charged with two counts of felony death by motor vehicle Friday morning January 7th, 2022. She was processed at the Mecklenburg County Sheriff's Office Intake Center, given a $25,000.00 bond on each count "Unsecured" and released. 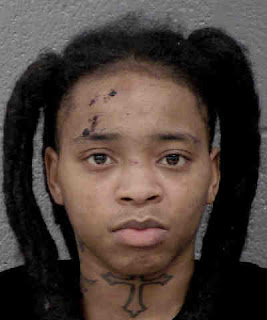 Life is cheap in Charlotte the two victims in this case not even worth a cash bail of $100.00.
Harris is set to appear before judge on Monday morning January10, 2022.
Harris' four prior Mecklenburg County arrests all resulted in dismissed charges.
Posted by Cedar Posts at 11:20 AM

Nice leave it up to CMPD Officers to have to take out the trash. Couldn't these two POS just stay home and overdose like everyone else? Nooooo they have to go out in style. Cause a big uproar block traffic and get their mug shots on Cedar Posts. Good Riddance!

This is Vi Lyles Charlotte. Same as any democrat run shit hole and it is just going to get worse. I hope the parents of these three noogies see what a fine example they set for their children. Harris might get out of jail but it won't be long her days are short.

Really pretty low to post the mug shots of the two victims.

I guess the stupid looking neck tattoo is supposed to mean something?

Once a POS always a POS!

2:18 Not as low as those two are going, six feet under is just the first stop on a long trip down the river.

Maybe she could work for CMPD when she gets off of probation? All she would have to do is wear a cover over her stupid ass neck tattoo! She'd be promoted in a timely fashion and would be a very good representation of the community! What y'all think?