Things have turned quiet at the Charleston City Marina. Gone are the mega yachts, those gleaming white ships made of spotless fiberglass, bright shinny chrome and their perfectly tanned crew members.The cruising crowd has gone south as well. Those retired couples, enjoying their life aboard fuel efficient trawlers that have become the floating equivalent of motor homes.

On the vast and now mostly empty mega dock a straggler of the snow bird procession arrives in a sailboat with a faded yellow hull, that chalks away in a yellow and white cloud of dust. The boat is a 1977 Erwin sloop 28 feet long named Elizabeth. A boat that has been floating since what appears to be time began.

Two weeks before Christmas and I'd swear that his name might as well be St. Nicolas or even Santa Claus. Nick or at least his near likeness is really named George, complete with a pipe whose smoke encircles his head like a wreath, a full neatly trimmed gray beard and a head full of thick silver hair tucked up under a red wool cap.

I guess that George is nearly 70 though he could be 100, he is an attractive man for his age, with strong weathered features and a crooked smile like that of Harrison Ford.

His only passenger is Coco, an overly excitable Chocolate Lab that bounds off the boat the second the first dock line touches the cleats.

Coco has spotted a dolphin and wants everyone to know about it. Running back and forth along the dock and barking endlessly with George yelling Coco, Coco, CooooooCooooo!

Finally Coco obeys and wanders with his head hung low back to the sailboat but still his tail wags nonstop. 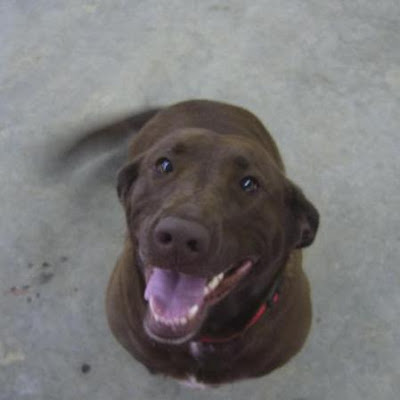 I suspect that George has traveled a lot with Coco as they both seem well suited to each other. Coco knows his job is to be the dolphin spotter, and George over looks Coco's inability to truly fulfill his role as first mate.

George doesn't offer many answers, not even a last name, not that he's unfriendly more so just private. His wife Elizabeth I learn, passed away nearly 15 years ago, he has a daughter in Texas and a son in Florida, neither, I decide he has seen or spoke to in a number of years.

To the question of where is home? George simply points to the boat. Where are you heading? And he points south.

Coco needs some private time on some green terra firma and so George and Coco head down the dock.

I glance at the boat and discreetly try to appraise the boat’s seaworthiness. Yellow, Red and Blue Plastic jugs are lashed to the life lines running along both sides. The hull hasn’t seen soapy water, a brush or wax in at least a decade but it seems sound, except where the deck is cracked in three places. Elsewhere rust abounds, duct tape holds a port light closed and I determine that I'd not sleep on this boat even if I was wearing a life jacket and cradling a fire extinguisher.

But I should not judge, for one man's love of the sea and a life of travel is not always what another would wish or tolerate.

It's not long and George is back, “too expensive for me to stay here” he says. “They (the dock office) gave me an hour”. “I'll do some shopping and I'll be on my way”. “Might just anchor over yonder”, George continues while pointing to the mooring area just off the mega dock.

He repacks his pipe as Coco spots another dolphin and of course he’s off on a run barking with George in pursuit, a noticeable stiffness in his stride.

The last of the winters light has faded by the time George and Coco have moved off the mega dock and anchored on the other side of the Ashley River Channel.

After night fall, by the dim light of a Coleman lantern I can make out the silhouette of Coco and George and I imagine them enjoying a fine dinner of the beanie weenies and Miller Lite I helped them load aboard upon their return from shopping. I wish to join them and simply listen to all the tales George would offer.

All I can think of is Captain Jack Sparrow singing quietly…

His voice echos across the stillness of a cold winter night.

Dawn and George and Coco have already pulled up anchor. The sea birds circle overhead and though the morning mist I can make out the two of them motoring slowly towards the connector to a destination not yet known but heading south none the less.

I suspect that Christmas Eve aboard Elizabeth will be spent like most every night, watching the stars and enjoying the quiet except when Coco hears a dolphin break the surface 100 yards distant. I fear that should something happen to George and Coco, no one will ever know, much less care. But then the song returns.....

And I beleive in my heart that Dogs, Pirates and St. Nick live on forever.
Posted by Cedar Posts at 3:34 PM