Charleston on a Sunday Morning

There is something surprisingly satisfying about a good cup of coffee before sunrise on the water.

USCG Sector Charleston at Dawn Photo By The Author

Long before dawn, while most of the peninsula is still sleeping, the traffic on the connector non-existent and the only sound is the running tide racing past the pilings of the docks, my coffee pot perks away. In the cold winter air the smell of fresh brewed coffee fills the morning stillness.

It is said that Thomas Jefferson our 3rd President was an early riser and that he considered the hour before sunrise “God’s Hour”. Without preaching, and accepting that there are plenty of reasons to doubt God’s existence based on current events, an early morning walk along the battery might convince someone otherwise.

There is this amazing calliope of sound before dawn. Birds both sea and land take wing, their calls rejoice at the coming dawn as dolphins break the surface less than 30 feet away.

The moving white over red lights far across the harbor racing towards the sea buoy identify Charleston Pilot Boat Ft. Moultrie cutting through the water on her way to meet an incoming containership. The low pitched rumble of her Detroit engines stirs my soul. It’s a sound that says there are things to be done, work to do, and new day has begun.

The sound of a sanitation truck backing reminds me that not all early morning jobs are as glamorous as a harbor pilot’s. The random thump of Sunday newspapers on the sidewalk announces the arrival of the Post and Courier Sunday edition, just as it has for over 100 years.

The faint line of the horizon slowly edges towards daylight, at first just a touch of brightness in the eastern sky then in progressive stages rather than a slow accumulation, the sun closes in on Charleston. It’s been daylight on the Atlantic Ocean for five hours before the sun’s rays streak over Sullivan’s Island and bathe rainbow row, perhaps the best time to take a photo of those wonderful pastel colors is in the early morning.

While tourists sleep the peninsula belongs to her residents, few I know by name most by their dogs or the funny gait they run. Before long the sounds of horse drawn carriages will echo along the narrow streets, they will ply the streets like shrimp boats running back and forth and will soon be joined by noisy tour buses.

Tourists who are wrongly convinced that the first shots of the civil war were fired from these very cannons displayed at White Point Gardens will soon pose proudly beside them as proof of their visit to Charleston.

Sunday’s come to life on the Peninsula, when the Holy City offers the sound of church bells to the coming day. Throughout the morning bells ring, never on time or at the same time (it’s a Charleston thing) calling the faithful and giving a delight to tourists who discover an early morning walk in Charleston holds many nice surprises. 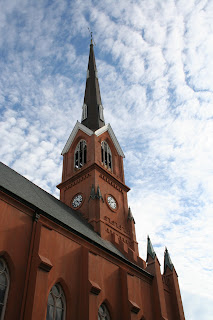 And I think about telling someone what I have known about Charleston mornings for nearly 30 years and then again maybe I’ll just have another cup of freshly brewed coffee.
Posted by Cedar Posts at 7:23 AM

Thanks. Nice writing...I can smell that coffee.

Very informative blog, and beautifully elaborating the complete information about the topic. We are from the same domain emerging as the top mobile app development company for versatile app creation services. You can email us at sales@appsquadz.com or Phone Number: +91-9717270746