Two black boys drop their bicycles and scamper up the wood steps of the “Midway Grocery and Service Center”. They dash inside just as a pickup truck’s tires scratch away at the gravel and then bark as rubber meets the asphalt, that lies just beyond the pine needles.

I have a good sense of direction most the time, and as long as I have a half tank of gas, I can eventually find my own way even when trying to take a short cut across the South Carolina Lowcountry. No need to ask for directions, it’s a man thing don’t you know?

I purposefully park my new black SUV just to the right of the building, slightly out of eyesight of anyone inside the small country store. The other cars are at least ten years older; a faded blue rusting pickup dates from the 60’s, a Ford wagon and Chevy Nova sit around back. The only new car is a red Honda that is parked in the spot with a sign that says “Reserved for Bubba”.

I negotiate my way around the bicycles, hot on the trail of the two young boys and before I know it the screen door has slammed shut behind me. The two boys fidget as if they are in need of a bathroom. They are trying their best to wait patiently in front of the counter, each holding on tightly to a single crumpled dollar bill.

The man behind the counter looks to me and I look to the young boys.

He nods, then looks at the two boys and asks: “What can I do for you two?”.

“Sir, I want one of them there eggs”. The smaller of the two boys pleads. 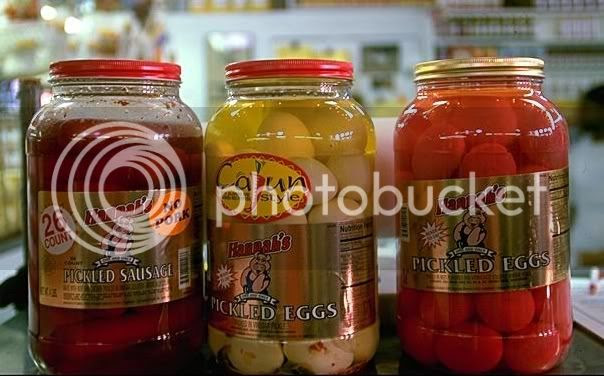 The eggs are floating in a gallon jar filled with a vinegar and brine solution, pickling spice and dotted with just the right number of large red pepper flakes. The jar has a red lid about six inches across, and it sounds like a dull cymbal dropped on the floor when turned. The jar is only half full of eggs but full of liquid so the man’s hand plunges in past his wrist, as he retrieves one of the eggs.

No latex glove, no tongs, no fork just his bare hand. A hand that belongs to someone who knows hard work. His fingers are fat and they dwarf the glistening and slippery white egg. I watch as he places the egg in a paper towel and carefully hands it to the first boy.

The second boy steps to the counter. He’s a little taller and I suspect they are brothers.

The man looks at the second boy and says “I’d supposed you want one too?”

“Yes Sir” the older boy replies and the process is repeated.

Then lid spins in a clockwise direction like a banker closing a safe after securing a large sum of money inside. The eggs adjust to fill the space of their recently departed comrades.

But before taking his hand off the jar, the man who I assume is named Bubba looks my way and asks if I’d like a pickled egg too.

He smiles and offers that he wouldn’t eat one of those things either.

I explain where I’m heading and Bubba laughs as he informs me that I’m so far out in the sticks that even the deer have maps.

The screen door slams shut again, and I find the two boys taking up two thirds of the steps, both eyeing me copiously. “Mister did ya find out where you’re going?” The younger one asks.

The older boy offers that "Augusta ain't that far" and asks if I’m going to see Tiger Woods play golf. I’m surprised that these two boys are not only smart but they also have really good hearing.

“We’ll you tell him that when I get old enough I’m going whip him good” The younger boy whose name is Cameron, jumps to his feet, and offers his best Bill Murray swing. It’s actually dead on, head still, shoulders, feet, with a full Tiger wrap around backswing.

I don’t say anything and just smile, because the kid has a really good swing.

"One day we’re going to build a golf course right here. This will be “Amen Corner” from this spot right here, all the way to the big old oak tree way down there”. Cameron adds.

I guess the yardage to the big old oak tree at less than 25 yards.

“You know it wouldn’t surprise me with all the pot holes in this driveway” I tell them both, while trying to keep from laughing too hard.

I leave Cameron and his brother, both now swinging invisible clubs at invisible golf balls in the parking lot.

Honestly Bubba might have given me directions to Greenbow, Mississippi for all I know. But somehow given the general direction of his gestures, I drive 3 miles turn left at the DeKalb corn sign, and then left again at the church with the cemetery and find a four lane that takes me right to Bobby Jones Expressway in the heart of Augusta, Georgia.

The azaleas are in bloom and the dogwoods have come to life, and once again CBS Sports will carry the Masters with "limited commercial interruption" from emerald green fairways of Augusta National Golf Club. At the same time, just down the road at the Midway Grocery and Service Center, Cameron and his brother will be playing for pickled eggs on a short par three ... errrr, I mean par 12 that also serves as the parking lot.

Tiger you better have your game on!

Other Posts About Tiger Woods:

That is so funny... makes me want to find Cameron and give him a club house pass to the masters!

Funny photo of Tiger Woods, he seems to be pondering Cameron's throwing donw the gautlent.

Thanks for posting it.

Tiger Woods has been and continues to be a good role model for his young followers.

The description of a very large part of rural South Carolina is very good too.

This story has been up for six months and while I like it, most of the "hits" come from people who google Tiger Woods. They like the photo of Tiger looking perplexed.

The most recent visitor was from Hanoi in Viet Nam.

And I want to shout out to READ the Story it is better than the photo at least I think.

Of course you have to know how to read english.

Great story cedar! I'm with you I wouldn't eat a pickled egg out of one of those jars OMG! How gross!

Love the story though.

Nice information, valuable and excellent design, as share good stuff with good ideas and concepts, lots of great information and inspiration, both of which I need, Very good points you wrote here..Great stuff...I think you've made some truly interesting points.Keep up the good work.
cash for scrap cars hobart
car removal hobart

Wonderful blog post. This is absolute magic from you! I have never seen a more wonderful post than this one. You've really made my day today with this. I hope you keep this up!
cash for cars caboolture
car removal caboolture

Wonderful blog post. This is absolute magic from you! I have never seen a more wonderful post than this one. You've really made my day today with this. I hope you keep this up!
cash for cars caboolture
car removal caboolture

Truly, this article is really one of the very best in the history of articles. I am a antique ’Article’ collector and I sometimes read some new articles if I find them interesting. And I found this one pretty fascinating and it should go into my collection. Very good work
Cash for Cars Wollongong

Thanks for posting this info. I just want to let you know that I just check out your site and I find it very interesting and informative. I can't wait to read lots of your posts.
Cash for Cars Euroa
Car Removal Euroa