All That Begins Today 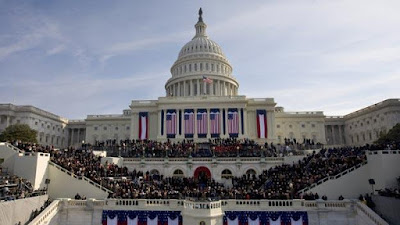 Though couched in indirect terms, Barack Obama's inaugural address was a stark repudiation of the era of George W. Bush and a vow to drive the U.S. into “a new age” by reclaiming the values of an older one.

It was a delicate task, with Bush and former Vice President Dick Cheney sitting feet from him as he described the false turns and the roads not taken. In his words, Obama blamed no one other than the country itself – “our collective failure to make hard choices” and a willingness to suspend national ideals “for expediences sake.”

Yet every time Obama urged Americans to “choose our better history,” to make decisions according to science instead of ideology, to reject a “false choice” between safety and American ideals, to recognize that U.S. military power does not “entitle us to do as we please,” he signaled a commitment to pragmatism not just as a governing strategy but as a basic value.

It was, in many ways, exactly what one might have expected from a man who propelled himself to the highest office in the land by denouncing where an excess of ideological zeal has taken the nation. But what was surprising about the speech was how much Obama dwelled on America's choices at this moment, rather than the momentousness of his ascension to the presidency.

Much as he did during his campaign, he barely mentioned his race. He didn't need to. The surroundings said it all as he stood on the steps of a Capitol built by the hands of slaves.

He talked instead of the challenges of taking command of a nation beset by what he called “gathering clouds and raging storms.”

He had to evoke the call for national unity that Lincoln made the centerpiece of his second inaugural in 1865. He had to instill the sense of optimism and patience that resounded in Franklin D. Roosevelt's first inaugural in 1933. And he needed to recall the combination of national inspiration that John F. Kennedy delivered from the same spot in 1961, six months before Obama was born.

Obama's address became larger than its own language, more imbued with meaning than anything he could say. And yet what he did say must have come as a bit of a shock to Bush, who knew his policies had been widely criticized, yet rarely over the past eight years had to sit in silence listening to a speech about how America had taken a tragic detour.

It was Bush, in 2004, who vowed repeatedly that it was his job “to confront problems, not to pass them on to future presidents and future generations.” Yet there was Obama, blaming America's economic peril to an era “of greed and irresponsibility on the part of some, but also our collective failure to make hard choices and prepare the nation for a new age.”

When Obama turned to foreign policy, he had more implicit criticisms, noting that the Cold War was won “not just with missiles and tanks,” but by leaders who understood “that our power alone cannot protect us, nor does it entitle us to do as we please.” It grows instead, he said, “through its prudent use.”

It was a message much of the world was waiting to hear. But it was matched with a warning to America's enemies that “you cannot outlast us, and we will defeat you.” It is that balance – the promise of an America that hews to its ideals, but achieves victory through silent strength – that will be the true test of Obama's administration. It is a test yet to come, but one that begins today.

I'm pressed for time, so I'm going to defer to one of a handful of writers I follow. David has expressed my feelings pretty much dead on, but I must add that after watching CNN for 24 hours none stop I'm ready to move on.

My thoughts on the Obama Win and the Election
Posted by Cedar Posts at 3:50 AM