When the CIAA tournament comes to town it seems to bring a good bit of controversy. Last year it was Chief Monroe printing his own parking passes to hand out to friends. This year it's free tickets for the Mecklenburg Board of County Commissioners, well at least those who are Democrats. 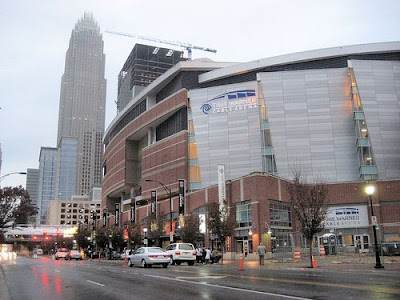 James also alleges that County Manager Harry Jones, was the "bagman" for the illegal dealings. Well that might be a little over the top but we shall see.

The issue is simple, the CIAA Tournament asked for and received from the BOCC $200,000.00 of taxpayer money. Since the tournament will return again next year you can expect that they will ask for another $200,000.00 for 2011.

Nothing like adding a little grease to insure that next year's money is in the pipeline.

But the expense of holding the CIAA Tournament doesn't end with the $200,000.00 cash gift from the BOCC, much of the costs for providing security to the tournament is picked up by the City of Charlotte and you can bet Chief Monroe has his hands on plenty of free tickets.

James accused Jones of withholding those complimentary tickets from Republican county commissioners, and supplying them only to Democrats on the board. The reason James said is that he and fellow Republicans Niel Cooksey and Karen Bentley planned to sell the tickets and give the proceeds to charity.

But in email exchanges James distributed to the media Friday, Jones told James the Republicans would not be given tickets because of CIAA policy against resale of complimentary passes.

"Additionally, you have made it very clear that you do not want the tickets, so none are being offered to you," Jones wrote in one of the emails James provided Friday.

According to WBT, the emails also show the involvement of Tim Newman, head of the Charlotte Regional Visitors Authority, which provided the complimentary tickets to the county.

"Newman, in one email, told James he would supply him and the Republican commissioners with upper-bowl tickets to the tournament if they were still interested in making tickets available to those charities."

James declined Newman's offer, claiming that too was unethical.

County Attorney Marvin Bethune says that he sees nothing wrong with accepting the tickets.

Cedar Posts can't find a reason that anyone in political office would accept tickets to an event that receives funding from the county. If the law as written doesn't specifically say accepting these types of gifts are unethical then we need to help those commissioners who lack ethics by drafting a law that spells out what most of us see as common sense.

But common sense is something that the BOCC and Mr. Harry Jones sorely lack. If it is wrong for Parks Helms of the Mecklenburg ABC Board to accept a free dinner then it is wrong for members of the Board of County Commissioners to accept free tickets.

But Harry Jones has never been one to understand ethics the fact that Mr. Jones would have a condescending email exchange with a county commissioner even Bill James is unacceptable.

This is just another reason to lower the curtain on the current board of county commissioners on November 2, 2010.
Posted by Cedar Posts at 10:08 AM

does anyone know the value of the free tickets?

As usual our BOCC & Harry Jones are showing their ethics and intelligence! And again we citizens see they are ALL brain dead!

Wonder if RuttMutt is gonna make some tickets this year? Why not, he seems to be the only person I have ever known to get away with counterfeiting! Even if it is "just" Parking Passes it is STILL a FELONY!

I don't understand why Harry Jones is still employed. Is it because he is black? The man has no morals, he just doesn't get it. Cedar you are so right anyone who accepts a free ticket should be run out of town on a rail as my grandfather would say.

if its a felony and someone sees him make them or try to use them, they can do a citizens detention. how funny would that be!

Hahaha...I can see it now (and I am just nuts enough to do it) running up to RuttMutt with cuffs and yelling "Citizens Arrest, Citizens arrest"....Hahaha1 THAT would be FUN! (and funny)

I have actually thought about standing out front of CMPD with a sign that simply says "RoMo MUST GO" and having a Petition in hand!!! What a sight huh?