News I'd Rather Not Report

File this under I feel so dirty: 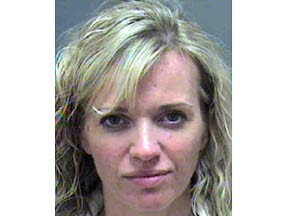 CHARLOTTE, NC (WBTV) - Professional wrestler Richard Morgan Fliehr "Ric Flair" was assaulted in his Charlotte home Sunday night and his wife has been charged in connection with the incident, police said.

The incident happened Sunday, Feb. 21 around 11:39 p.m. according to a report filed with the Charlotte-Mecklenburg Police Department. (Read the police report)

The 60-year-old Fliehr told police that he and the suspect -- who is not named in the police report -- came back from dinner and went to Fliehr's home at 7010 Summerhill Ridge Drive in Charlotte's Stonecroft neighborhood.

Fliehr told police officers the suspect assaulted him inside the house following a domestic dispute.

According to the police report, Fliehr sustained minor injuries, which were caused by "personal weapons" such as hands, feet and teeth, but he refused to be transported to the hospital.

Fliehr is married to 41-year-old Jacqueline Baines Beems. According to the Mecklenburg County Jail website, Beems was arrested Monday morning at 4:40 a.m. and charged with assault and battery.

Beems, who police confirmed was involved in the incident, has since been released from jail.

A photo of Beems from happier days is here.

And for some more racey details and a little op-ed you can read the Carolina Scoop.
Posted by Cedar Posts at 6:22 AM