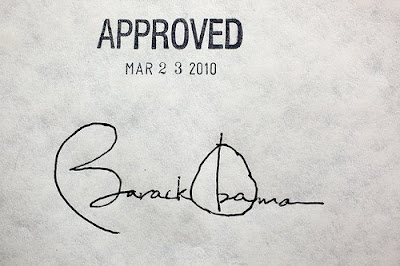 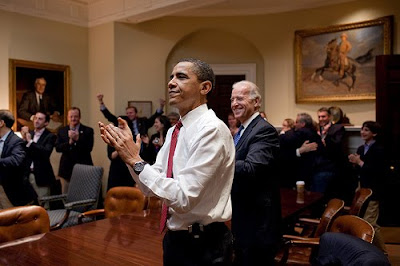 President Barack Obama, Vice President Joe Biden, and senior staff, react in the Roosevelt Room of the White House, as the House passes the health care reform bill, March 21, 2010. (Official White House Photo by Pete Souza)
Passing the health care reform bill ends a year long battle over one of the most debated government efforts since Medicaid. The costs unknown, the benefits unknown the amount of pork added to the bill unimaginable.
But will craming a law on to the books without a 2/3 majority work? To be continued.
Posted by Cedar Posts at 6:04 PM

No it will not work, we will become as disfunctional as England, France, Canada and a broke as they are. The only hope we have is the next president and there will be another one - Obama will not be relected again, neither will his democratic party repeal this idiotic bill. There is nothing in the constitition that guarentes health care- health insurance. I pay enough out of pocket for my own family and in taxes to add teh additional burden of millions of others is unfair...and not our responsibility .

I don't get it, the government "makes" us have insurance on our cars, nobody protested that? So a car is more important than a human life? I don't think so!

You try having to go broke, sell everything YOU own, and then claiming to be homeless JUST to get chemo! Or better yet, wait till it happens to someone YOU LOVE!

No doubt health care is busted.

The system is totally screwed up.

You can be turned down for medical coverage if you have bad credit.

Drugs for even simple things like colds and infections are 100 times more expensive in the US than in Canada.

Does the Obama-Democrat bill address these issues? NO!

I agree, MANY items need to added or changed! But, hopefully Cedar they will do some amendments and CHANGE some of the stupid things they have in there! And ADD what is really needed!

But for now at least I can have some hope that my daughter and grandkids (hopefully a few years away...LOL) will have some sort of health coverage!

the government only makes you buy car insurance if you own a car. The government does not make people buy cars, so the argurment that this is equivalent to car insurance is a joke. You have a choice on your transportation. This bill forces everyone to buy a product from a private company. Unconstitional.

There is no way this is going to work.

Start with the IRS will need to hire 16,000 new employees to oversee the collection of information and fines.

The fines are charged for people who don't buy insurance, no doubt they don't have the money to buy insurance or they would buy the insurance.

These are the same people you don't pay taxes because they for one reason or another live a life of cash. So how can you fine people who don't pay taxes if the only way you can fine them is via the IRS?

Yes, only if you have a car, that goes without saying! But more imporant is everyone eventually has a medical need! And FINALLY those who need it may finally get it!

Gov'mt has been in the "insurance" industry for years, flood insurance, Medicare, medicaid, disaster, etc. So why should this be any different?

Life is MORE important than ANY of the above! So WHY not allow ALL people to be covered!

Yes the plan as it stands now is ridiculous, but I have faith that once the Repubs get back in office they will re-do most of it to where HOPEFULLY it will be affordable and rational!

Of course it will have to benefit THEM as does all big business! But between the two parties it eventually ALL works out...

The govenment needs to get the hell out of my life. I have worked all my life supporting all these free loaders, who sit on their butts drawing pay checks every month because the govenment says I have too. If i want to give a person a charitable contribution I will from my own pocket. We working class people are now SLAVES to the govenment. Stop taxing me too death and maybe I can afford to live. Obama care!! A great F...ing thing!! And thats the way it is.