Rielle Hunter Talks to GQ From Her Home In Charlotte Eeeeeek!

The Washington Post has published excerpts from a nearly 10,000 word GQ interview with Rielle Hunter titled "Hello, America, My Name is Rielle Hunter" in which says she's still in love with "Johnny" and believes he loves her. 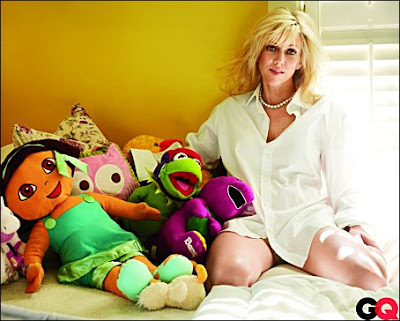 Hunter also tells GQ "That they went to bed together the day they met." That his marriage was "toxic," that he feared "the wrath of Elizabeth." That it was Young's idea for the coverup in which he claimed paternity. That she had no idea how much money -- now the subject of a grand jury inquiry -- was being funneled to her from top campaign donors. 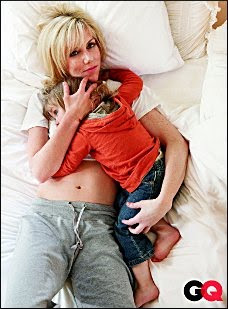 The article is accompanied by photos of Hunter curled on a bed in what is reported as her Charlotte home. 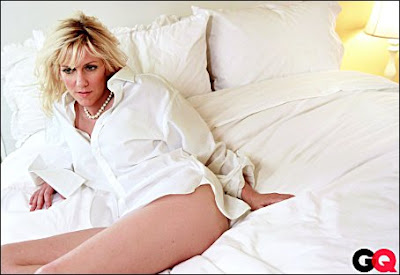 Hunter says she receives child support from Edwards but lives in a rental home. The home Edwards bought for Hunter in Charlotte's Eastover neighborhood, Hunter says she cannot afford to live in.
Posted by Cedar Posts at 7:10 AM

Second the "Skanky" and add totally inappropriate...what WAS he thinking?

That's my kinda girl. She doesn't even want dinner and she opts for the pants off close.

I'd guess she was looking to cash in and didn't waste any time.

I think the photo of her with the kid looks pretty good but the other ones are trashy.

But WTF is she doing in Charlotte?

Sad taht she feels the need to degrade herself even more than she did with her affair with Edwards...the saddest part is the child in all of this! Poor kid will have a hell of a time growing up with all the controversy she continues to cause! BUT, she just keeps making herself look wrose, she needs to be quiet!

Ahh hell who am I foolin, I'd probably do the same thing get my 15 minutes of fame and $$$ too, LOL

yea , really high class pictures... i think she and john edwards deserve each other.....they need to crawl under a rock together and STAY !

The pictures of her dressed so provacatively are just for John. You know she is saying, "Look John, this is what you are missing, You know you want me. Tough ^&*^&(%..."
She got what she wanted. Some sex, a kid, lots of money and a big house. and no John..what a plot that was.
John must be kin to clinton. I bet they both like stogies. Imagine one as pres and one as vice pres. No dog safe in the house!!!

What a whore...money mysteriously was in her account each month an she didn't know where it came from...she gives the word homewrecker a new name...I guess she hasn't heard what goes around comes around...