Charlotte Observer's Tommy Tomlinson often has the innate ability to complicate the obvious and trivialize the momentous. Bill James is a media whore, he really can't help himself. Put the two of them on the same page and you have your hands full.

On Wednesday James announced that 50% of African Americans have STD's, but it took until Saturday for Tomlinson to call James out for stretching the facts. Once the story was posted it didn't take long before things got ugly. With more than 200 comments by noon the Charlotte Observer finally shut down the comments section. 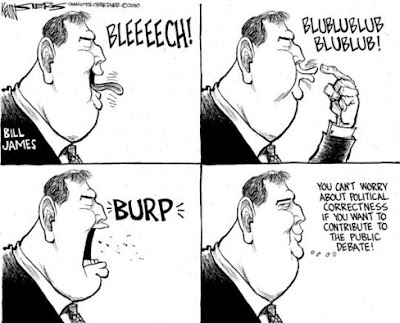 While most of the comments were tame, some where rude, others were racial comments that were not really necessary, Tommy was called fat and James a fat pig. The comments were split just about down the middle, some for Tommy and some for Bill James, still others went on to explain the idea of safe-sex.

Tommy calling out James is pretty funny since the two of them live for each other.

Like TMZ and Paris Hilton, or Lindsay Lohan and People Magazine all are just more nationalized versions of Bill and Tommy, though Paris and Lindsay are alot easier on the eyes.

Those who write newspaper columns, yack away on radio or blog about such behavior are just as narcissistic as those they report on, myself (Cedar Posts) included.

Bill James is running unopposed for County Commissioner again, he wasn't even challenged in the primary. Knowing his re-election is in the bag, I'm sure he felt he was free to say whatever he wanted, regardless of merit, fact or politeness.

Tommy Tomlinson is one of the very few long time Observer writers who are still on the full time payroll and may have felt it his duty to take on James.

To Cedar Posts that fact that Bill James' lacks a challenger means one of two things, either he is a great Mecklenburg County Commissioner or his South Charlotte district just doesn't care. I'm thinking the answer is not the former.

The pettyness and finger pointing reached the point of absurd when James challenged Tomlinson to a tickle fight leaving the Observer no choice but to shut down the comments.
Posted by Cedar Posts at 2:42 PM

They are both fat pigs who push peoples button to get attention. Sick just plain sick.

I see Bill James for what he is a troll. Tommy on the other hand is a left wing tree hugger who from time to time writes some pretty fun stories. His Bill James is not one of them.

Too many times Bill James is misunderstood or his words are taken out of context and then critized. For example, when he whispered to Vilma Leake that her son had been a "homo" because he had died of AIDS, everybody went wild critizing James because he had used a inappropriate word - homo. Quiet frankly I'm offended that society has allowed homosexuals to call themelves "gay". They are NOT gay, they,re homosexuals and I consider homo short for homosexual. Now saying "queer" might be offensive but some homos call themselves queer. Remember the TV show that ended with a "?? with a Queer Eye"? And if Ms. Leake's son died from aides, it was either from being "homo"sexual or a drug abuser. Drugs were never mentioned!! Maybe Mr. James is a bit outspoken and I certainly don't agree with everything he says but I don't agree with everything everybody says either. Even Tommy! Tommy, 'ole boy, stick with your humorous and sometimes personal stories - you are no political critic!!

lol. Sorry, I could not help myself.