Welcome to this week's show, where city council members try to out the purvey old man in the crowd.

Cedar Posts was convinced it was Dandy Andy Dulin or maybe the "fast to claim his innocence" Ed the Peacock. Fail Cedar!

During Monday's "Lighting Round", all council members voted in favor of opening a discussion of the Mayor's sexual harassment memo, except Warren Turner. 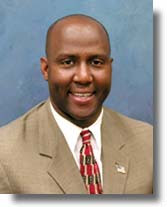 Nothing like being the only Army Volunteer who fails to take a step backward when the general asks for a volunteer to step forward.

Turner later explained that he didn't want the matter to go any further which might cause a lawsuit against the city by exposing the staff member who alleged the unwanted sexual advances.

Cedar is not a rocket scientist but lets see if we can work this out, the mayor has two staff members and the city clerk's office has four. Well I doubt it's the super sized one or the three who are over forty, so that leaves contestant number 3 and number 6. Whoa, number six is a guy!

The Meck Deck goes into more detail here. And the Charlotte Observer all but convicts Warren Turner with this morning's story "Officals Link Turner to Foxx Email".

We owe the citizens of Charlotte our very best effort every day, and I appreciate all of you for your investment of time and energy in making our city a better place. The responsibility, of course, extends to our personal treatment of staff as well, including not engaging in any form of sexual harassment towards them. Any such behavior cannot and will not be tolerated by me, our City Council or the public we serve, and I ask you to keep that in mind.

For those of you traveling to Washington D.C. this week, I wish you safe travels and a productive series of meetings with our congressional leaders and others.

So what is next? And do you get the feeling that our City County Government is just spinning out of control?

The Charlotte Observer closed the comment section on the Warren Turner story due to abusive comments. No censorship here, you are welcome to call Warren Turner out if you like. Just like NASCAR have at it boys!
Posted by Cedar Posts at 8:16 AM

This was so easy to guess even before the CO story, because of the lack of demands for someone to be fired. Had it been Dulin or Peacock the others would have immediately demanded justice. Now all we will get is "Oh, that just Warren being Warren."

This is funny I'm sure Warren offered nothing more than his WMD!

And WHY could it NOT be one of three OVER forty? (and if I don't get back into working out daily I will soon resemble the super sized one too...LOL)

So Cedar you think Turner didn't want to open the Marcus Jackson file because that sort of sexual harrasment was something he was already doing?

I'd bet you big money that was the reason and you again are spot on!

What a classless loser!!

Warren Turner and Marcus Jackson both Alumi from the CMPD school of professional conduct, amazing!

I hope the victim steps up and sues the bejeezus out of the city.

If Turner had any class he's step down so the City and get back to work.

Forgive my honesty, but have you ever known a "black" politician to do the right thing such as stepping down.

NO they stand up there and tell people THEY are the greatest and get re-elected based on race NOT honesty, integrity and values! For those who vote on race alone THAT is racist and prejudism!

And for those who say I am prejudice, I voted for Obama (the other choice w/Palin would have been a worse disaster IMHO!) and Anthony Foxx! BUT it won't happen again!

Why is it blacks are allowed to play the race card and whites are not? CO deletes my comments every time I point this out....ROFLMAO!

Its not that blacks are allowed to play the race card and whites are not!!
Its that WHITEY has turned into the biggest coward of the century.
Well, maybe he is just trying to be nice and show the world we all can just get along. We all cant just get along. WHY? because when one race cowers down to another then one race will become the more powerful which leads to take over.
Look at govenment in this city now. We have allowed this take over to occur because we were doing the right thing. We should be fair, we said. Lets give everyone an opportunity to prove they really can be great leaders. Well, not in this city. Its obviuous that isnt happening..The black leadership we have in cmpd, dss,mayors office, meck county just cant cut it. Its time to move on. Just like in November we can only hope America stands up for itself and removes every democrat in office that voted for obama care. Same principles apply here.
Warren Turner couldnt tell the truth if it was written in front of his face to read. But he will tell you He is pro police and is responsible for all the great equipment they received while he was head of the public safety committee, CRAP.
And thats the way it is.

Warren Turner is been my husbands probation officer and I have to say he has only done his job. He is a hard working man with a family and people need to stop blowing things out of proportion. If you weren't there then you don't know enough to make judgments. All I know is that Warren Turner had given my husband the benefit of the doubt and done his job right. Who are all of you all commenting on here like you know something about somebody? What does race have to do with this? I'm a white woman! If someone tries to stand up and do the right thing then someone else gets mad and starts twisting up lies and stories. Don't you people have anything better to do?