According to Mark Washburn who stays on top of all things media related for the "Local Paper" Pete Kaliner will sign off from his WBT night host spot on March 31ending a two-year run in late evenings.

To those in the under 30 crowd, even those of you in the media business there is not much point in reading the rest of this post. There is no way you can appreciate radio the way your older neighbors do, its just not in your twitter, text and google news DNA.

But the word from Mark is that Pete will be replaced with syndicated radio show, which makes the news troubling. This is not just a change for the sake of change, or to build ratings or because Pete wasn't a draw, its the end of an era.

Mention WBT after nine PM to anyone who has lived in the Carolina's for more than 40 years and the first person they will think of is "Hello Henry" Boggan who passed away in 2006. Henry hosted the nighttime spot on WBT from 1979 to 1996 and Pete is one of many hosts including Tara Servatius and others who have had the honor of following in Henry's footsteps.

I think Pete did an excellent job, and the blame for the death of WBT hosting a late night call in show should not fall on Pete Kaliner and it doesn't.

I suppose it was just a matter of time, and I should have seen this coming. The days of Wolfman Jack and Casey Kasem have long ago faded into the past. Radio isn't what it used to be, I'm not really sure what it is anymore.

But there was a time before texting and twitter, a time before email, a time when even talk radio was new. A time when Henry was talk radio before talk radio became the Rush Limbaugh style of opinionated and abrasive hang up on you talk radio. Henry Boggan and WBT at one time was a place where your opinion mattered and I think Pete honored that tradition.

To understand why this is something more than just another budgetary cut back you have to understand what AM radio at 50,000 watts is all about, and why WBT's signal which reached from Miami to Maine was such a big deal. 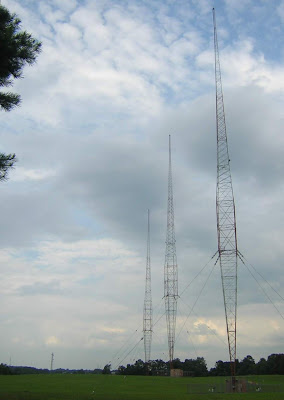 I've been told that back, I mean way back in the day Piedmont Airline pilots would fly from New York to Charlotte using an ADF radio receiver tuned to WBT at night. While the VOR signal would take them right to the airport, following the WBT signal put them on the south side of the airport, right over Nations Ford Road and pretty much lined up with runway 36 and it also allowed them to listen to "Hello Henry" while en route.

Anyway this is a big deal, not just for Pete Kaliner but for anyone who ever tuned into WBT from the Outerbanks during the summer while fishing, or while on a late night road trip back from a Carolina basketball game. And for anyone from Charlotte who served in the military from Maine to Miami, when WBT at night was a nice way to cure a bad case of homesickness.

More about Henry Boggan is here at BT Memories.
Posted by Cedar Posts at 5:47 PM

Not good news for Charlotte.

Perhaps that idiot Larsen would have been a better choice to cut than Pete. I listen nightly and enjoy Pete's focus on local politics. He has done an outstanding job and will be missed in this market. All the best, Pete!

thanks for this very insightful post. I rarely agreed with Pete but I admired his passion and knowledge of local affairs. This is a loss for Charlotte.

I know we're talkin' "talk radio" here but WBT lost me when Rockin' Ray left. Everything thereafter has just been .......

I won't say it, I don't want to offend anyone.

Don't get me wrong, I like Pete as much as the next guy, but that bit called the "Partisan Divide" was the most grab-ass load of phoned in bullshit I've ever listened too. Pure hack material.

Pete is great at not just the local politics, but he can really bring it in terms of national issues - taking full advantage of WBT's Clear Channel status. I especially love the way he talks to callers who disagree with him and doesn't just cut them off like so many other talk show hosts. I hope he gets another show soon!

Pete has been great, my favorite at the station. He has always stated the Libertarian viewpoint better that any one else on the whole dial, that I have heard anyway.

I'd take Pete over Larsen or Hancock anytime.

Cedar I know you're just being nice but I know you're talking about Larsen when you say "hang up" on you in your face talk radio.

I laugh when I hear Keith Larsen begging for people to call in.... oh he doesn't really beg he just has a lot of dead air time.

If you take enjoyment in hearing Larsen play dope a rope with Alvin Greene then by all mean listen to the man's show. But I think Larsen is a jerk.

If WBT has any brains they'd drop kick Larsen to the curb and bring in Pete.

More Charlottte crap IMO. Good Luck to Pete @ his next stop. HJe was my engineer back in 98-99 and in my opinion , has come a long way @ 'that radio station' not allowing him to grow is just one more case of the short-sightedness that seems to overwhelm folks when they cross over & into the city limits of "The Queen City'..
Duane Goins

....and Tara Sebaceous is still on the air? Pete has a "face for radio". Tara has a voice for print media....

I moved to Charlotte in 1994 and have gained a lot of ground while there. I served in the National Guard and in Law enforcement only to be disappointed in the liberal leadership. But in the past 6 years it has gave its soul over to the liberal agenda and has become the biggest failure story in the south. Rather it is the school system or the city government. It trickles from the top to the academically unaccredited police chief at the bottom. It is the next bastard child to Atlanta in the area of liberal politics.

I listen to WBT all the time when I'm not working. Pete was part of the reason. It was very apparent that he treated everyone with respect and was culturally fluent. Replacements will most likely be lacking. Was money the reason or an excuse?
ewing von Schmittou

If ratings were based on narcissism, Pete's ratings would be high. Good riddance!

Good riddance. 24 hours of conservative agenda is ad nauseam. Radio is dead because big companies are at a creative loss on what to give people. So WBT keeps shoveling the same right wing agenda; Obama slam,pro war crap down every republican radio listening codger in charlotte. The problem is, only people listening are too old and cheap to go out and support the advertisers.