Corn Maze 911 Call a Sad Sign of The Horror Ahead

No doubt you've seen the headline, or watched the national press coverage of the young Massachusetts couple who got lost in a corn maze and had to be rescued by the police. 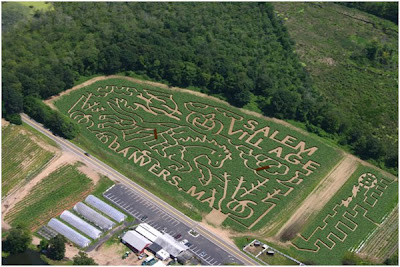 The Connors Farm corn maze is located in Danvers, Mass., about 23 miles north of Boston.

After about an hour in the maze, darkness began to fall. The couple, who were there with their 3-week-old baby, panicked and placed a desperate call to police. They were rescued within 20 minutes.

Woman in tears: Hi, I just called. I'm still stuck at Connors Farms. I don't see anybody. I'm really scared. It's really dark and we've got a 3-week-old.

Police officer: Your husband is with you?

Husband: I see lights over there at the place, but we can't get there, we're smack right in the middle of the corn field.

Woman: I don't know what made us do this, it was daytime when we came in, we thought if we came in someone would come in and find us... We can hear [the police officers]... Oh, my goodness. The mosquitoes are eating us alive, and I never took my daughter out, this is the first time. Never again.

Woman: This is embarrassing.

The couple have yet to be identified but their plight and panic is troubling and sadly symptomatic of gen-y often call generation "next" adults raised by helicopter parents.

Over the last 25 years the hovering parent has evolved to a standard. The concept of no child left behind, massive parental oversight, soccer moms, tethered kids, home schooling, lock step education and pass fail grading has resulted in adults who can't solve even the slightest of problems.

It this case it meant picking a direction and forcing their way through 25 feet of corn stalks to the parking lot and their car.

Cedar Posts lives in a nice quiet South Charlotte neighborhood, for the most part we are well removed from crime on our dead end street.

A dozen homes away there is a large family, four, five maybe six kids. Whenever the kids are out playing the parents are present. They set up lawn chairs and keep a steady eye on the kids.

Besides protectors of real or imagined predators, these hovering parents are also well meaning problem solvers. They are quick to jump up to address any issue, they fix broken toys, upright fallen bikes, retrieve lost balls, mediate all disputes no matter how minor. And therein lies the trouble.

It starts with a preschool puzzle, the square piece won't fit into the round hole and the hover parent is quick to place the round piece in baby's hand.

The hover parents are always there, at soccer games they step up to help their child tie his shoes, and wipe her nose. They make calls, they arrange rides, pack their kids bags and speak to the coach about playing time.

They never miss a game, fail to complete a school project on time, or help look up answers on wikipedia for their precious child.

In college they will stop at nothing to make sure their daughter is a success, tending to every possible detail and intervening on even the shortest of notice.

I have employed college graduates who where incapable of problem solving. It was impossible for them to think outside the box or on their own. It is not that they were dumb, they simply never were given the opportunity to fail and try again. It doesn't take long to learn than their parents were of the hover variety.

Hover parents have raised an emerging generation who can't think for themselves, adults who are entering the work force, and having families yet they lack the basic skill set to survive even the most trivial of challenges, including a corn field.
Posted by Cedar Posts at 3:32 AM

So true, kids today are clueless about so many common sense things.

Most can't make change from a dollar. Heaven forbid if you hand them a $1.00 for a 77 cent candy bar and plunk down an extra 2 cents a they put the 1.00 in the cash register.

This is probably the best piece you've written on this site. 100% accurate. LET YOUR KIDS FAIL ON THEIR OWN!

HA HA HA...OMG that is exactly how I treat my 3 pups. group class on Sat. private trainer on wed and whenever outside, they are watched like a hawk, with constant intervention over the slightest sign of an issue. oh well, atleast they are fixed, so they wont be passing their issues onto offspring. lol.

So so true...CP! I was waiting in the DMV office the other day and loving the conversations of the many waiting in line with me for over two hours..but that's another topic..and this young girl beside me apparently there to get her license for the first time, asked her mom several times while she was texting her friends how to spell (patient, oblivious and participate)! Same day..when I stopped to get something at a fast food establishment..my order came to around $6.49, so I gave the young girl a ten and nine cents...you should have seen her face, she first gave me back the amount the register obviously had told her to for the $10 and she couldn't change it in her head....sad!

Corn Maze: Thinking inside the box. Mostly in this world of ours if we think outside the box we are taken to jail or fined or sued.

Push through the corn? Damage to property! Fined for vandalism; sued for damaging the maze and for destroying property.

At least we have cell phones with which to call for help.

Maybe your conclusion should have been that the Cornfield Maze owners did not do the responsible thing and assure that all visitors were out of the maze before dark.

The kids in the stores are taught to follow their training. Playing money games for 'even coins/change' is not in the training. Violate rules/training and get fired! Keep 'thinking' inside the 'box' or take the consequences. If the customer does not want to play with pennies, use a credit card.

Watch a few news items about child abduction and then consider how carefully you watch the kids. I once personally saw a known child abuser/murderer trolling my 'safe' upper middle-class neighborhood trying to snatch toddlers from a house nearby. Do not disparage good parenting.

A friend is the absolute epitome of the helicopter parent. A few years ago, her oldest was in college and pursuing training for the medical field. The mother called me one day in December asking about what the implications of a missed final exam would be. I told her likely an F or at least an incomplete if there was some reason justifying the absence.

Her oldest had had the wrong date/time for the final and inadvertently skipped it.

Let's look at what's wrong with this:

1) The over-pampered kid is so bereft of basic competence that scheduling final exams is too taxing.

2) Upon learning of the error (I've never heard of another instance where this occurred), the kid's first response isn't to call the professor to try to work it out, but to call Mommy.

3) Mommy's response isn't to tell the kid to accept the consequences, but to look for a mulligan.

I told the mother that if her kid lacked the basic competence to keep an exam schedule, then life-or-death situations of the medical field shouldn't even be under consideration for a career. Mother didn't listen.

Cedar you are spot on! Parents are idiots, and it is only going to get worse.

It may already be too late for many middle-class US kids:

Cedar, I swear I think of an old Howey Mandel standup riff when I consider the plight of Amerca's 25-and unders.

Not unlike Pat McCrory or a 3rd nipple.

I'm dismayed at so many of the young people out there. They don't have even the most basic of manners.

Note to the 24 year old was just hired at my office. Farting is not funny and just because you think its normal its not ok to let it rip whenever you have the urge.