Those who follow Cedar Posts' view of the current "sit in" across from CMPD Headquarters know that I consider this annoyance just the first of many as DNC 2012 rolls into Charlotte. 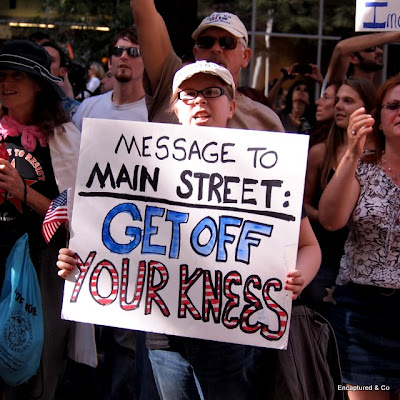 Photo Provided Cedar's answer, Get Off My Lawn.

I don't like strange people taking a leak in the bushes, even more so when they can't verbalize why they are camped out in the first place. Seriously they don't have a clue what they are protesting except to say corporate greed.

The liberal answer to the Tea Party? Since we had the Arab Spring already is this the American Fall or just an excuse for people who like to camp out and smell bad to pitch a tent in an otherwise quiet section of Uptown Charlotte?

Whatever the reason Cedar Posts is open minded so here is an interesting View of Occupy Charlotte from Angela Boatright-Spencer:

Sunday afternoon with DJ, Tabby, Ben, Alex, Bobby, Jon, Walter, Tina, Chris, Tina, Jeremy and Yuri, 20-somethings, mostly, encamped on a lawn near the intersection of North Davidson and East Trade streets, carrying out the mission they have accepted: transforming the world from one based on money, hierarchies and corporate greed to one based on fairness, equality, and the Golden Rule -- "do unto others." This is their platform, one echoing across the globe as the movement known as Occupy Wall Street gains momentum.

"I was tired of seeing a world run by money," says 20-year-old DJ from Mooresville, when I asked, "so...why are you here?" He stretches out his jean-clad legs on the grass, leans back on his hands. "I saw what was going on on Wall Street, saw this as a great awakening for the American people. ...Speaking up has really been lost in the past three decades, since the 60's." Tabby, also 20, nods her head in agreement. The couple has been camping out since October 8th, when Occupy Wall Street began in Charlotte.

The scene just across from the Police Station on East Trade is eeriliy reminiscent of the 60's sit-ins, or, perhaps, Woodstock, without the rock music and with more sense of purpose. There isn't a lot of levity here. Young people, mostly in their 20's, mill around an encampment with 32 brightly colored tents. They wear jeans, t-shirts, bandannas, and tatts. Some body parts are pierced. The sun is warm, the sky a bright Carolina blue as the group sits in a circle under a shade tree. But this is no picnic. This is young people taking action in the best way they know how. "I was sick of being an armchair critic," Alex, 19, tells me. "It was time to do something and not just complain about it."

The rest of Angela's story is here.

Cedar's Take: What is funny to me is that we have all these vocal fringe groups, Tea Party, Occupy Charlotte, and NAACP, Rainbow Collation, PUSH, Act Up!, LGBT, and so on, but none of these represent mainstream America, the reason is we are too busy, working, paying our taxes and taking care of our kids.

More photos from OccupyCharlotte.org are here.
Posted by Cedar Posts at 12:23 PM

So instead of being an "armchair critic", Alex took his complaints outdoors and pitched a tent in uptown Charlotte. Wow!

So instead of being an "armchair critic", Alex took his complaints outdoors and pitched a tent in uptown Charlotte. Wow!

Chief Monroe say they aren't breaking any laws. Which is just plain odd.

Nothing wrong with these people, they are just Democrats showing up early for DNC2012!

Wait just a dang minute. Comparing these leftist freaks to Tea Party activists is not only wrong, it's laughable. Tea Party folks ARE hardworking Americans who want smaller government.

Get of your high horse and recognize the truth!

Teabaggers are just as wacked as the pup tent crowd.

The anti abortion crowd has been the death of the Republican Party.

The NRA stood firm on anti gun control while thousands are murdered each year.

AARP demands attention while these old farts kill the future for their grand kids.

Special interest groups should be banned including the Tea Party.

"none of these represent mainstream America, the reason is we are too busy, working, paying our taxes and taking care of our kids."

Yep, that pretty much says it all.